Meet Glen Meyerowitz... Before He Sets Off for Two National Science Fairs 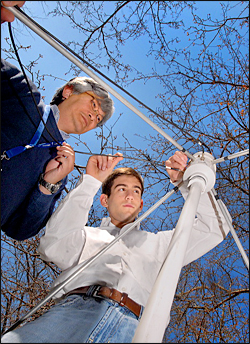 After winning first place at the Long Island JSHS on March 14, Meyerowitz was among 250 high school students invited to present his research at the National JSHS in Colorado Springs, CO from April 29 to May 3. Then, because he won the Physics and Engineering category at Long Island Science and Engineering Fair (LISEF) on March 23, he will join 1,500 high school students representing 50 countries from May 10 to May 15 for ISEF in Reno, NV.

"It's a lot of fun to present my work," said Meyerowitz. "People ask questions and that drives me to learn more myself." Meyerowitz has already had some presentation practice when he was named a semi-finalist in the 2009 Intel Science Talent Search Competition.

Little is known about the high-energy cosmic rays that Meyerowitz first began hunting in December of 2007 with his mentor, Brookhaven physicist Helio Takai. It is likely that the high- energy particles originate in places such as black holes but it is unclear just how they are produced and then accelerated. It is estimated that just one of these rare cosmic particles reaches each square kilometer on Earth per century.

To detect these particles, Meyerowitz sifts through large quantities of data collected by a radar antenna in the courtyard of Brookhaven's Physics building. The antenna is part of the Mixed Apparatus for Radar Investigation of Atmospheric Cosmic-rays of High Ionization (MARIACHI) Project, which is a collaboration between BNL, Stony Brook University and 10 Long Island high schools.

Meyerowitz filters through the MARIACHI data using a laptop computer to connect to a server, which allows him to work anywhere there is Internet access, including his bed. He writes his own computer programs to identify cosmic rays within the data using languages learned in school, such as C++ and Java, and R, a statistical computing language that he taught himself. Meyerowitz also uses the same laptop to connect with other budding high school scientists and researchers through the LISEF group on Facebook.

"Glen remains very focused on what he is doing and carries out his work with great care and attention to detail," commented Takai. "Although his future is hard to predict, he is a student with an enormous potential and will do well in any area, particularly in science and technology."

However Meyerowitz finishes next month at JSHS and ISEF, BNLers will be rooting for him.