Would You Drive a Hybrid?

It was Ivan So's conscience that led to him to a Toyota Camry hybrid-electric car in 2007, when gas prices averaged more than $3 per gallon in New York state. "I felt guilty about driving my SUV, so I bought a hybrid," said So, who works at NSLS.

The high cost of fuel and awareness of greenhouse-gas emissions has convinced more than 30 BNLers to start driving hybrid vehicles. Those vehicles were on display recently, part of the Lab's Earth Day recognition of hybrid drivers.

"My husband and I got our first [Toyota] Prius in 2000," Director's Office staff specialist DJ Greco said. "We did it for the environment. We didn't care about the cost of gas because it was still cheap then."

With more hybrid models on the market each year, environmentally and cost-conscious drivers have more vehicles to choose from. Jeff Williams, the BNL Employee Transportation Coordinator, said the Lab will continue to add more hybrid vehicles to its fleet, including "plug-ins."

"This isn't just a phase," Williams said. "There is a better cost-benefit relationship to driving a hybrid with vehicle prices coming down."

Even with the recently reported concerns about safety in smaller vehicles, drivers still say they feel safe in their hybrids.

"The SUV is better for the rain and snow, feels more sturdy, and has more metal, but I still feel safe in my Camry," So said. "It is a lot quieter than the SUV, and it makes no sound when I'm stopped because it's running on battery power. It feels much different."

But Greco warned that its quietness is not always a good thing.

"You have to be careful in parking lots," she said. "It's so quiet that people don't know you're coming, especially little kids. And you don't want to beep your horn, you know?" 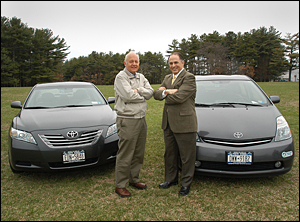 Williams said these cars must pass crash testing and inspections. Considering the many SUVs and other larger vehicles still out on the road, he said, "I'll tell you this: these hybrids are safer than Smart Cars."

Michael Kretschmann, a fire protection engineer, said he was disgusted with the pollution and wasted gas from driving his Jeep. Now he and his wife each drive a 2006 Prius, and their savings in fuel is adding up.

"Even with my 70 mile commute each day, I still use less gas than my friend who lives in Rocky Point," he said. Now, Kretschmann only uses his Jeep for hauling large loads, and he plans to continue buying the Prius model for commuting.