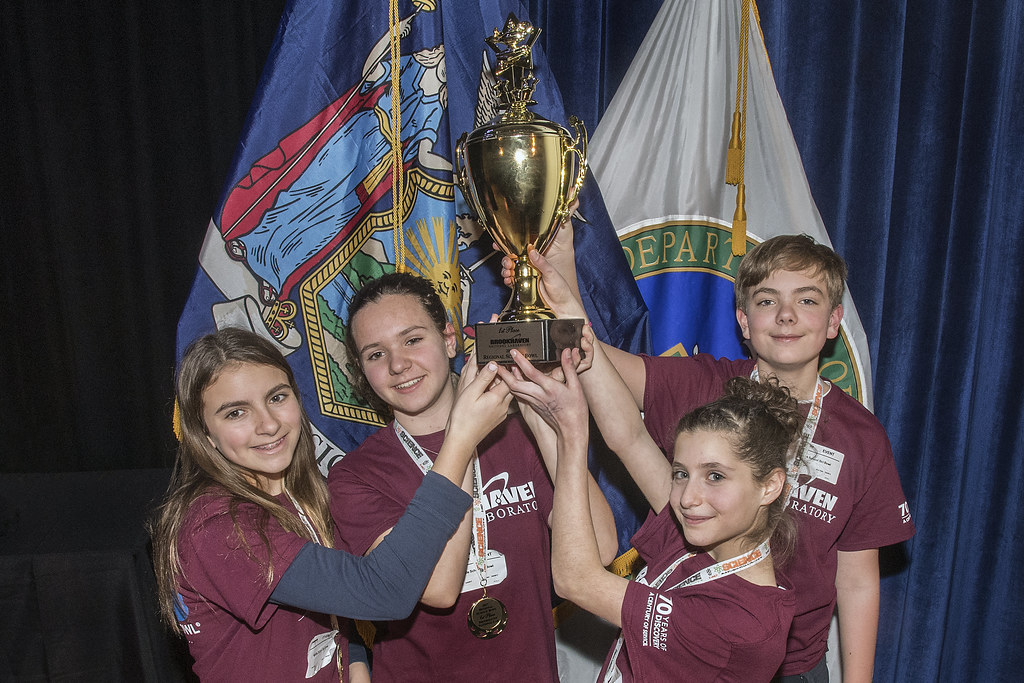 UPTON, NY — In an exciting finish, Locust Valley edged out Commack Middle School to take top honors at the Brookhaven National Laboratory/Long Island Regional Middle School Science Bowl held at the Lab on Saturday, March 4. Locust Valley competed against 18 other teams from across Long Island in one of the regional competitions of the 27th Annual U.S. Department of Energy National Science Bowl® (NSB). As the winning team, Locust Valley will receive an all-expenses-paid trip to the National Finals in Washington, DC, scheduled for April 27 to May 1.

Competing teams are each made up of four students from diverse backgrounds, one alternate, and a teacher who serves as an advisor and coach. These teams face off in a fast-paced, question-and-answer format, being tested on a range of science disciplines including biology, chemistry, Earth science, physics, energy, and math.

“The National Science Bowl® continues to be one of the premier academic competitions across the country and prepares America's students for future successes in some of the world’s fastest growing fields in science, technology, and engineering,” said Dr. J. Stephen Binkley, Acting Director of the Department’s Office of Science, which sponsors the nationwide competition, now in its 27th year.  “Each year the DOE Office of Science provides this unique opportunity, and I am honored to congratulate all the competitors who are advancing to the national finals, where they will continue to showcase their talents as top students in math and science.”

Locust Valley science teacher and coach Christopher Hoppner said, “The students all agreed before the contest started that win or lose, this was a great experience. They worked hard, but had fun. Bringing the trophy home to our school was a great honor and we look forward to the national competition in Washington D.C.”

"This was definitely a team effort,” said Watson.  “We worked hard, but never expected we would make it this far — but we did! So, we will continue to study as a team before we head to Washington D.C. to represent our school.”

A series of 116 regional middle school and high school tournaments are being held across the country January through March. Winners will advance to represent their regions at the National Science Bowl®.

While at the Lab—which in 2017 is celebrating its 70th year of science and 100 years as the site of former U.S. Army base Camp Upton—teams learned about the world-class research facilities and the types of science research that have earned researchers at Brookhaven seven Nobel Prizes to date.

Participating students received a Science Bowl t-shirt and winning teams also received trophies and medals. Prizes are courtesy of Brookhaven Lab's event sponsor, Brookhaven Science Associates, the company that manages and operates the Lab for the U.S. Department of Energy.

Approximately 265,000 students have participated in the NSB since it was established in 1991, and it is one of the nation's largest science competitions. The high school team that won the 2016 NSB received a nine-day, all-expenses-paid science trip to Alaska, where they learned more about glaciology, marine and avian biology, geology and plate tectonics. The second-place high school team at the 2016 NSB won a five-day, fully guided adventure tour of several national parks, which included a whitewater rafting trip.

The U.S. Department of Energy's Office of Science manages the NSB and sponsors the NSB finals competition. More information about these events is available on the National Science Bowl® website (link to https://science.energy.gov/wdts/nsb/ ).