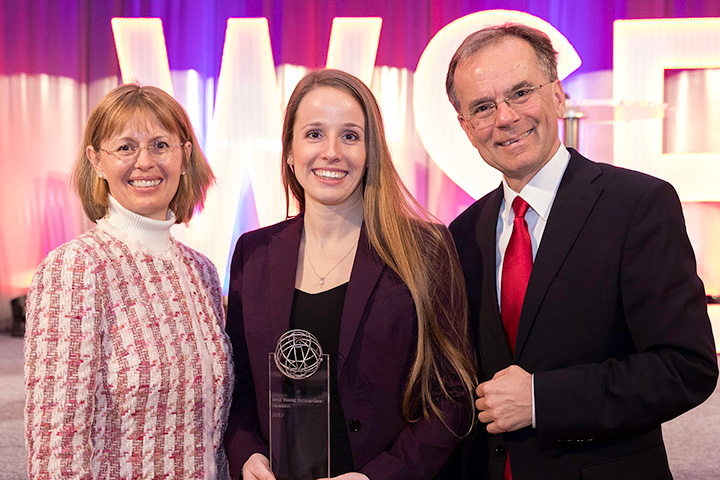 Rebecca Trojanowski, a staff engineer in the Sustainable Energy Technologies (ST) Department at the Department of Energy’s (DOE) Brookhaven National Laboratory, recently received the "Best Young Researcher Award: Biomass" at this year's World Sustainable Energy Days (WSED) in Wels, Austria. The conference is one of Europe's largest sustainable energy conferences, with over 700 attendees from 59 countries.

Trojanowsi’s work relates to the performance of wood pellet stoves. She was the only speaker from the U.S. in the young researcher session. While this award does not have widespread recognition in the U.S., it is highly visible in the European Union, which boasts a large community of pellet stove researchers.

The 2017 conference focused on energy efficiency, biomass, and sustainable buildings.

Nearly 80 papers were submitted by young researchers in the fields of energy efficiency and biomass from 35 countries. A scientific committee selected papers for oral and poster presentations. The papers were presented in two sessions—one on biomass and one on energy efficiency. Trojanowski’s paper, “Repeatability in particulate and gaseous emissions from pellet stoves,” was among those selected for oral presentation.

“It was very exciting when they announced me as the winner,” she said. “They played music, and made a little joke about our American TV shows mess ups with names in the envelope, hoping they got the right one unlike Miss Universe and the Oscars.”

“At this conference, Rebecca presented her research to support the second U.S. wood stove competition held at Brookhaven,” said Tom Butcher, leader of the ST’s Energy Conversion Group. A third competition was held on the National Mall in Washington, D.C. “She had to develop and demonstrate a test method with a very high repeatability and coordinate the large group of stakeholders involved. Her work, funded by the New York State Energy Research and Development Authority (NYSERDA), helped advance this field and this has been reflected in the award.  This conference is a great opportunity for Rebecca to build her research network, get feedback on her work, and to get new ideas for technical directions at Brookhaven.”

John B. Rhodes, president and CEO of NYSERDA said, “Governor Cuomo’s Renewable Heat NY program is encouraging innovation in renewable heating technologies that burn cleaner and more efficiently. We congratulate Rebecca on this tremendous honor and look forward to her continued work that will help the state achieve its clean energy goals.”

Trojanowski said the conference, which she has attended before, is particularly useful for networking.

“I made a friend who is working in Austria and Germany on the same research we are here at Brookhaven,” she said.  “Since I met him back in 2012, he has come to Brookhaven to present his work and share it with the U.S. Environmental Protection Agency and the Northeast States for Coordinated Air Use Management.  I recently visited his lab to try to adopt some of their practices to further our research efforts. I learned about pellet quality issues faced even in Europe with their tight standards, about a calculator which can help determine the best technology to reduce fine dust in pellet/chip boilers, and some of the issues the European Union faces with real life operation of wood stoves compared to laboratory test methods. This is what we are working on as well. It was great to chat with experts working on these issues in Denmark, Germany, and Austria.”

Trojanowski traveled to Austria before the conference began and was able to attend site visits to different wood boiler manufacturers and different field installations.

“I saw a pellet boiler with an integrated Stirling engine to produce heat and electricity in a home that also had solar panels,” she said. “This allowed the homeowner to produce electricity when there was sunlight via the solar collectors. If there was no sun, they could use the heat produced from the boiler to run the Stirling engine and produce electricity.  The home was still grid connected, but was able to be mostly self-sufficient in terms of its energy consumption.”

Trojanowski holds a BS in chemical engineering and a MS in mechanical engineering from Worcester Polytechnic Institute. She is currently a doctoral candidate in engineering science in the Earth and Environmental Engineering Department at Columbia University with her advisors, Vasilis Fthenakis, Barbara Panessa-Warren, and Tom Butcher. She first came to Brookhaven as a student assistant in the Energy and Utilities Division during the summer of 2010. She joined the Lab as a fulltime employee in 2012. During the summers of 2012-2015, she has been a research mentor, supervising the research of undergraduate and high school students through DOE’s Summer Undergraduate Laboratory Internship and Brookhaven’s High School Research Program.

“When I was completing my Chemical Engineering bachelor’s degree, I would have never guessed I’d be burning wood for my research, but over the past few years I’ve come to realized how important this work is,” she said.  “Particulate matter emissions in New York State alone are the highest from residential wood combustion, even higher than the transportation sector, even though only 2 percent of residents heats with wood!”

More information on the WSED conference