Building on a Brookhaven Lab innovation designed for brain imaging in moving rats, a team in Virginia and West Virginia designs a device for studies of human interaction, dementia, movement disorders, and more 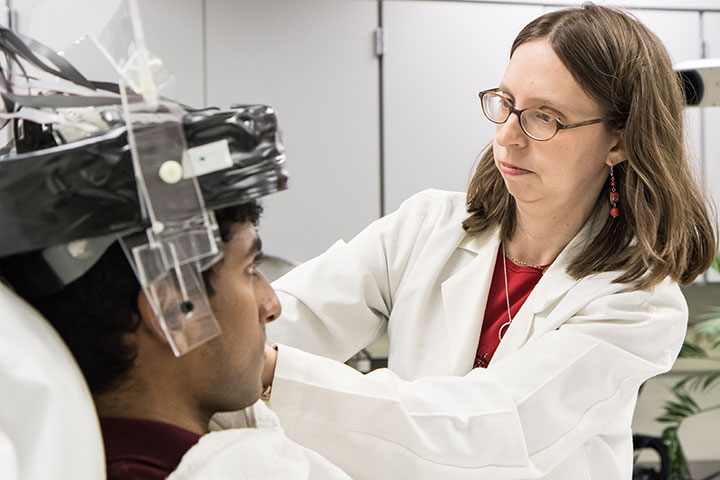 Julie Brefczynski-Lewis, a neuroscientist at West Virginia University, places a helmet-like PET scanner on a research subject. The mobile scanner—designed for studies of human interaction, movement disorders, and more—is based on a scanner developed at Brookhaven Lab for brain-imaging studies in freely moving animals.

Patients undergoing a positron emission tomography (PET) scan in today’s bulky, donut-shaped machines must lie completely still. Because of this, scientists cannot use the scanners to unearth links between movement and brain activity. What goes on up there when we nod in agreement or shake hands? How are the brains of people struggling to walk after a stroke different from those who can?

To tackle questions like these, Julie Brefczynski-Lewis, a neuroscientist at West Virginia University (WVU), has partnered with Stan Majewski, a physicist at WVU and now at the University of Virginia, to develop a miniaturized PET brain scanner. The scanner can be “worn” like a helmet, allowing research subjects to stand and make movements as the device scans. This Ambulatory Microdose Positron Emission Tomography (AMPET) scanner could launch new psychological and clinical studies on how the brain functions when affected by diseases from epilepsy to addiction, and during ordinary and dysfunctional social interactions.

PET scanners, as well as CT and MRI , are used by doctors but they are built by detector physicists.

“There are so many possibilities,” said Brefczynski-Lewis, “Scientists could use AMPET to study Alzheimer’s or traumatic brain injuries, or even our sense of balance. We want to push the limits of imaging mobility with this device.”

The idea was sparked by a scanner developed for studying rats, a project started in 2002 at the U.S. Department of Energy’s (DOE) Brookhaven National Laboratory. Majewski, a high-energy physicist by training, originally caught wind of Brookhaven’s “RatCAP” project because he ran in the same physicist circles as several of the RatCAP team members.

“I learned about what my friends and colleagues at Brookhaven were doing,” said Majewski, “and decided to build the same type of device for humans.” 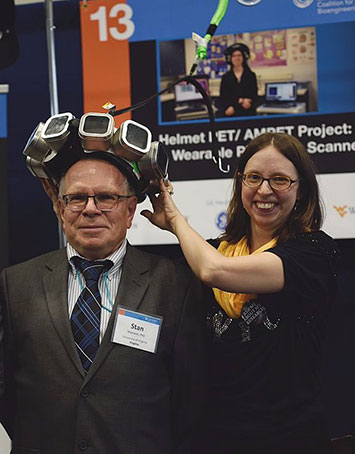 Stan Majewski, once a physicist at Jefferson Lab, now at the University of Virginia, and Julie Brefczynski-Lewis, a neuroscientist at West Virginia University—co-developers of an Ambulatory Microdose Positron Emission Tomography (AMPET) scanner—display a mockup of their device at a scientific conference. AMPET is based on a smaller mobile scanner designed for studies in rats that was developed at Brookhaven Lab.

The Rat Conscious Animal PET, or RatCAP, scanner is a 250-gram ring that fits around the head of a rat, suspended by springs to support its weight and let the rat scurry about as the device scans. Nora Volkow, head of Brookhaven’s Life Sciences division at the time, came up with the idea to image the brains of awake and moving animals.

“I wanted to do PET scans on animals without having to use anesthesia,” said Volkow, who is now the Director of the National Institute on Drug Abuse. Unlike humans, animals can’t be told to simply lie still in a scanner. But the anesthesia required to make them lie still muddies the results. “It affects the distribution of the PET radiotracer and inhibits neurons,” Volkow said. A wearable scanner, however, would move with the animal’s brain and eliminate the need for anesthesia (see HOW PET WORKS). Volkow enlisted the help of Brookhaven scientists and engineers to make the idea a reality.

Fortunately, there is a large overlap between medical imaging and nuclear physics, a subject in which Brookhaven Lab is a world leader. Today, physicists at the Lab use technology similar to PET scanners at the Relativistic Heavy Ion Collider (RHIC), where they must track the particles that fly out of near-light speed collisions of charged nuclei. PET research at the Lab dates back to the early 1960s and includes the creation of the first single-plane scanner as well as various tracer molecules.

A patient or animal about to undergo a PET scan is injected with a low dose of a radiotracer—a radioactive form of a molecule that is regularly used in the body. One commonly used tracer is 18FDG, a radioactive version of glucose developed by Brookhaven scientists Joanna Fowler and Al Wolf in 1978. These molecules emit anti-matter particles called positrons, which then manage to only travel a tiny distance through the body. As soon as one of these positrons meets an electron in biological tissue, the pair annihilates and converts their mass to energy. This energy takes the form of two high-energy light rays, called gamma photons, that shoot off in opposite directions. PET machines detect these photons and track their paths backward to their point of origin—the tracer molecule. By measuring levels of 18FDG tracer, for instance, doctors can map areas of high metabolic activity. Mapping of different tracers helps researchers gain insight into different aspects of a patient’s health.

“Both fields think about the same things—how the photodetectors work, how the scintillating crystals work, how the electronics work,” said Brookhaven physicist Craig Woody. “PET scanners, as well as CT [computed tomography] and MRI [magnetic resonance imaging], are used by doctors but they are built by detector physicists.”

Woody, who is now working on a new particle detector for RHIC, led the RatCAP project with David Schlyer and Paul Vaska. At the time, Schlyer and Vaska were heads of Brookhaven’s cyclotron operations and of PET physics, respectively. Schlyer is now a scientist emeritus at the Lab and Vaska is a professor of biomedical engineering at Stony Brook University.

In designing the small-scale scanner, the team used recent advances in detector technology. For instance, they used dense crystals to convert the gamma photons generated by positron-electron interactions into visible light, along with small light-detecting sensors called avalanche photodiodes. They also used special electronics developed at Brookhaven and built into the compact, lightweight PET detector. Suspending the structure on long springs helped support its weight so rats could “wear” the scanner while moving around easily.

“It was a very collaborative effort,” said Schlyer, who produced the radioisotopes needed for the scans. “We had people from physics, biology, chemistry, medicine, and electrical engineering.”

From rats to hats

Word got out about RatCAP as the scientists presented their progress at conferences and meetings. Stan Majewski, then at DOE’s Thomas Jefferson National Accelerator Facility (Jefferson Lab), took notice. He had been working on new methods of breast cancer imaging, applying his high-energy physics detector expertise to the medical field.

“I had known Stan for a long time—we worked together at CERN, the European nuclear physics laboratory,” said Woody. “I have to give him credit because he was constantly saying ‘you really ought to do medical physics.’”

Majewski noted that Jefferson Lab's management was very supportive of the project and provided some seed money even after he relocated to WVU to do more work on medical imaging. While there he expanded on the ideas of the RatCAP and built a prototype wearable PET brain imager for humans.

“A mobile brain imaging tool has applications in psychology research and clinical uses,” Majewski said. “You could do bedside imaging of epilepsy, for example, and watch what happens in the brain during a seizure.”

“Stan saw the potential in the RatCAP and took it further,” said Woody.

The patent drawing of the prototype was sitting on Majewski’s desk at WVU when Brefczynski-Lewis, a neuroscientist, walked in. The drawing of a helmet-shaped detector on an upright person caught her attention.

“I had always been bothered by this middle zone of the brain you couldn’t reach with other imaging technologies,” she said. “With electroencephalography (EEG) you can’t reach deep brain structures, but with PET and MRI you can’t have motion. I thought Stan’s device could fill this niche.”

After building the first prototype at WVU, the two scientists began using Helmet_PET to image the brains of volunteer patients. After Majewski transferred to the University of Virginia the team developed a newer model of the device, now known as AMPET. The current imaging cap is designed to scan a standing person and is attached to an overhead support, allowing for some motion.

AMPET bears great similarity to one of the first PET scanners built at Brookhaven, nicknamed the “hair dryer.”

“The ideas have sort of come full circle,” said Schlyer. “What has changed is the technology that makes these devices possible.”

The AMPET team hopes to start developing a full-brain scanner soon—one that covers the entire head rather than examining a horizontal five-centimeter section, like the current ring. 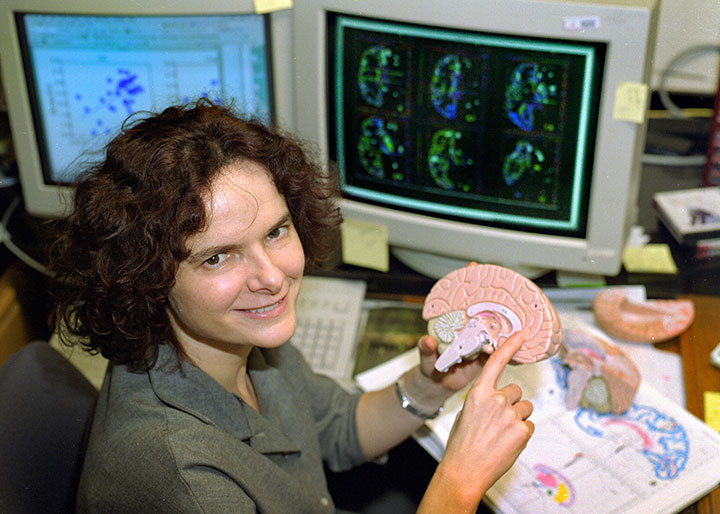 Nora Volkow, who led a world-renowned brain-imaging program at Brookhaven Lab, came up with the idea for RatCAP. She is now the director of the National Institute on Drug Abuse.

Because AMPET sits so close to the brain, it can “catch” more of the photons stemming from the radiotracers used in PET than larger scanners can. That means researchers can administer a lower dose of radioactive material and still get a good biological snapshot. Catching more signals also allows AMPET to create higher resolution images than regular PET.

But most importantly, PET scans allow researchers to see further into the body than other imaging tools. This lets AMPET reach deep neural structures while the research subjects are upright and moving.

“A lot of the important things that are going on with emotion, memory, and behavior are way deep in the center of the brain: the basal ganglia, hippocampus, amygdala,” Brefczynski-Lewis said.

From a psychologist’s or neuroscientist’s perspective, AMPET could open doors to a variety of experiments, from exploring the brain’s reactions to different environments to the mechanisms involved in arguing or being in love.

Brefczynski-Lewis described ways to use AMPET to study the brain activity that underlies emotion. “Currently we are doing tests to validate the use of virtual reality environments in future experiments,” she said. In this “virtual reality,” volunteers would read from a script designed to make the subject angry, for example, as his or her brain is scanned.

In the medical sphere, the scanning helmet could help explain what happens during drug treatments, or shed light on movement disorders.

“There is a sub-population of Parkinson’s patients who have great difficulty walking, but can ride a bicycle with ease and without hesitation,” said Schlyer, who is also an adjunct professor in the Radiology department at Weill Cornell Medical College, where he studies Parkinson’s. “What is going on in their brains that makes these two activities so different? With this device we could monitor regional brain activation as patients walk and bike, and potentially answer that question.”

Brefczynski-Lewis noted, “We have successfully imaged the brain of someone walking in place. Now we’re ready to build a laboratory-ready version. It’s been an exciting journey—uncovering the needs of different neuroscientists and developing this device that we hope will someday meet those needs, and help in our quest to understand the brain.”