This story originally appeared on the website of the U.S. Department of Energy’s ARM Climate Research Facility: https://www.arm.gov/news/features/post/44325

At Brookhaven, 'Wide-Eyed' Visitor Takes in American Science and Culture 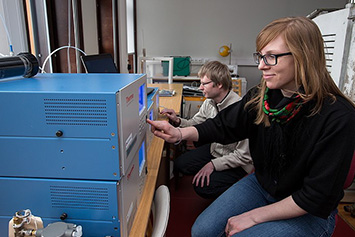 Maris Palo is pictured at her university laboratory in Tartu, Estonia.

In her native Estonia, budding atmospheric scientist Maris Palo is a doctoral student at the University of Tartu. When she is not cracking books or watching over instruments in the field, she works at the university’s Laboratory of Environmental Physics. Her academic specialty is atmospheric aerosols, how local conditions affect them, and in particular the aerosol size spectrum. That’s the diversity of tiny particles that nucleate to form clouds.

Last fall, Palo flew west from her home on the Baltic Sea to spend three weeks at Brookhaven National Laboratory on Long Island, in Upton, New York. Her trip spanned October to November, when Thanksgiving foods were already on American tables. “I tried,” she says with surprise in her voice, “pumpkin soup.”

Then there was the first visit to New York City, where five crowded boroughs are home to eight times more people than live in Estonia. And then there was everything else.

Her brief research trip, from October 22 to November 10, was funded by a European Union program for early career scientists.

“She was mostly wide-eyed,” says Estonia-born Janek Uin, an assistant atmospheric scientist at Brookhaven and Palo’s advisor at Tartu. They co-authored a 2016 paper on the “electric wind” that can distort size distribution measurements in Differential Mobility Analyzers. This ion-induced movement of gas in an electric field was the subject of Palo’s master’s thesis.

Uin mentors aerosol-related instruments for the U.S. Department of Energy’s Atmospheric Radiation Measurement (ARM) Climate Research Facility. He also studies the formation of new particles in the atmosphere, some just a nanometer wide. “That’s the size where they start their life,” he said.

Palo plans a related dissertation. Her preliminary topic is biogenic and anthropogenic influences on the formation and size distribution of atmospheric aerosol nanoparticles.

For Palo, of course, the lion’s share of the visit was spent at Brookhaven, where she helped install and validate a set of instruments bound for the Southern Great Plains in Oklahoma, ARM’s oldest observation site. Chief among them was one of the instruments Uin oversees for ARM, the laser-based Ultra-High-Sensitivity Aerosol Spectrometer, which sizes particles in the 60- to 1,000-nanometer range.

“She asked all the right questions,” says Uin of Palo and the challenging science “deep end” he threw her into at the lab. “My impression of her capabilities was magnified 100 percent.”

Palo had set out from Estonia with a plan. “I wanted to see how science was done on a bigger scale,” she says, in a national lab that sprawled over several buildings (at Tartu, there is one), and where there are “definitely different instruments.” Of special interest to her was the Cloud Condensation Nuclei Counter (CCN), which humidifies particles to see how they grow, then counts and sizes them. As such particles grow, they activate, and clouds form around them.

“In our lab,” says Palo of Tartu, “we don’t deal with instruments that assess what happens to particles in humidity. It was quite interesting to me.”

The CCN, she adds, is also used to study how pollution affects cloud and precipitation formation. 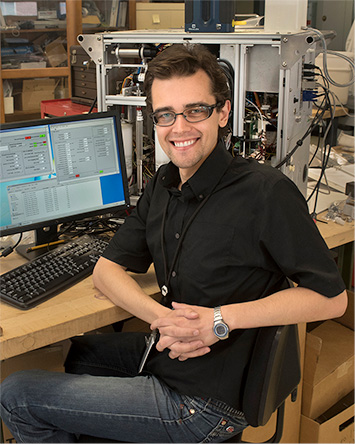 There was also the novelty of seeing instruments packed together in a shipping container, which is routine for ARM mobile facilities, the three portable observatories sited all over the world for up to a year at a time.

“That also is something I had never seen before,” she says.

At home in Estonia, Palo helps oversee instruments at the university’s two main field sites for atmospheric science. One is in Järvselja within primeval forest 46 kilometers from Tartu; the other is farther away in hemiboreal Tahkuse. At both observation stations, the instruments are housed in cottages. One is someone’s house.

Palo kept a science journal and, back in Tartu, gave a seminar on what she saw, including instruments and ways of doing science. “At Brookhaven, people knew very well what their roles were. Everybody didn’t do everything,” she says, unlike undifferentiated roles at home.

She also observed differences in communication styles. Both casually and in Brookhaven seminars, says Palo, “People discussed their science more than they do in my university.”

This kind of visit was a first, says Uin, and “It exceeded all my expectations.” Palo benefited by seeing how things are done at the ARM scale and at national laboratories, he shares. And both Brookhaven and ARM benefited from three weeks with an energetic and resourceful guest.

Maybe there will be another visit, or a postdoctoral role in the United States, Uin hopes. “Any institution that ended up with her would be lucky.”