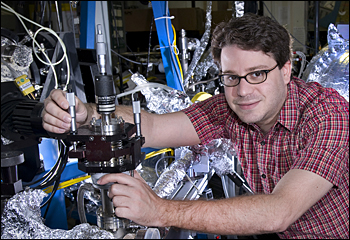 "Jon did a spectacular job on a really difficult project starting from almost nothing," Johnson said. "If he had failed, we would have used the excuse that it was because his first degree was in English. However, he did not fail; he was a great success."

"I finished my undergraduate work without yet deciding what I wanted to do," said Rameau. "When I was given a tour of Brookhaven Lab as part of a group of graduate students in physics at Stony Brook, I knew that working at the Lab would be a great opportunity for me. I could learn things here that I couldn't learn anywhere else. Under Peter Johnson's direction, I succeeded at completing some unique and difficult experiments. It is nice to be recognized for that work with this award."

In experiments at the NSLS, Rameau and his colleagues used a technique known as the Lucy-Richardson method to sharpen images of the energy spectra in high-temperature superconductors - materials that carry electrical current without any resistance when cooled to a certain temperature, known as the transition temperature. The researchers used this imaging method for the first time in photoemission experiments, in which ultraviolet light or laser light is used to measure the energy and direction of electrons in materials. As reported in the November 6, 2008 issue of Nature, the scientists confirmed that electron pairs needed to carry current emerge above the transition temperature, before superconductivity sets in, but only in a particular direction.

"High temperature superconductors were discovered in 1986, but we still don't understand exactly how they work," said Rameau. "Electrical power generation and transport would be much cheaper if industry could create superconductors that work at room temperature. Our basic research at the NSLS is important for moving forward to achieve that goal."

Rameau earned a B.A. in physics and English in 2001 from Vassar College, and he joined SBU in 2002. After he graduates from SBU with a Ph.D. in physics later this month, Rameau will become a postdoctoral fellow at BNL, continuing his current studies on superconductivity, as well as exploring some new areas of research.