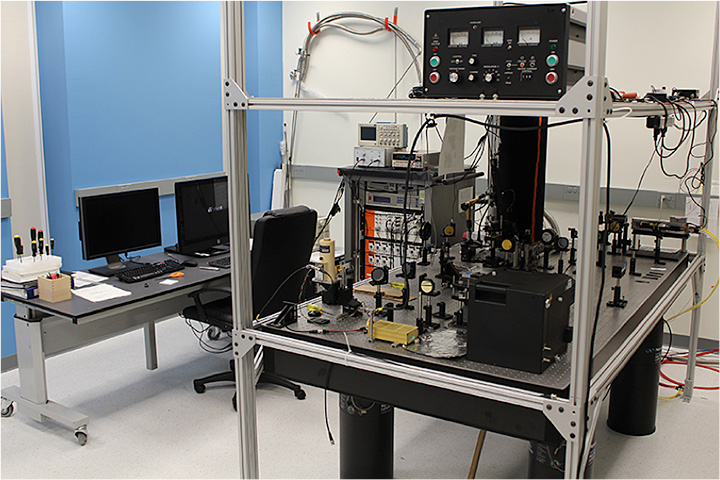 The new instrument, developed at Brookhaven and in use at Yale, combines atomic force microscopy (AFM) and scanning near-field optical microscopy to provide unprecedented insight into these complex nanomaterials. Courtesy Adrian Gozar.

UPTON, NY—Some of the most promising and puzzling phenomena in physics play out on the nanoscale, where a billionth-of-a-meter shift can make or break perfect electrical conductivity.

Now, scientists have developed a new method to probe three-dimensional, atomic-scale intricacies and chemical compositions with unprecedented precision. The breakthrough technique—described February 6 in the journal Nano Letters—combines atomic-force microscopy with near-field spectroscopy to expose the surprising damage wreaked by even the most subtle forces.

“This is like granting sight to the blind,” said lead author Adrian Gozar of Yale University. “We can finally see the all-important variations that dictate functionality at this scale and better explore both cutting-edge electronics and fundamental questions that have persisted for decades.”

Scientists from Yale University, Harvard University, and the U.S. Department of Energy’s Brookhaven National Laboratory developed the technique to determine why a particular device fabrication technique—helium-ion beam lithography—failed to create the scalable, high-performing superconducting nanowires predicted by both theory and simulation.

In previous work, heavy ion beams were used to carve 10-nm-wide channels—some 10,000 times thinner than a human hair—through custom-made materials. However, the new study revealed beam-induced damage rippling out over 50 times that distance. At this scale, that difference was both imperceptible and functionally catastrophic.

“This directly addresses the challenge of quantum computing, for example, where companies including IBM and Google are exploring superconducting nanowires but need reliable synthesis and characterization,” said study coauthor and Brookhaven Lab physicist Ivan Bozovic.

“HIB lets us focus the particle beam to less than a single nanometer and effectively ‘write’ patterns to create superconducting interfaces,” said Nicholas Litombe, who led the HIB work under the guidance of Professor Jenny Hoffman of Harvard, a coauthor of this study. “We set out to shift that technique to another class of materials: LSCO thin films.”

The collaboration started with the painstaking assembly of perfect LSCO thin films—so named for their use of lanthanum, strontium, copper, and oxygen. Bozovic’s group at Brookhaven used a technique called atomic layer-by-layer molecular beam epitaxy, which can create atomically perfect superconducting films and heterostructures.

“I have a long-standing interest and specialization in using interphase physics to induce and understand high-temperature superconductivity,” Bozovic said. “HIB gives us an entirely new way to explore these materials on the nanoscale.”

Litombe carved the ultra-precise interface channels in Bozovic’s thin films. But the immediate results were discouraging: the anticipated superconductivity was entirely suppressed when current ran through wires narrower than a couple hundred nanometers.

“Our computer models and experimental results all looked excellent, but we knew there were hidden forces at work,” Litombe said. “We needed deeper insight into the material structure.”

Material composition and electronic properties can be pinpointed through the way they absorb and emit light—a longstanding field called spectroscopy. In the instance of superconductivity, this can distinguish between the “shiny” surface of a conductive metal versus the dullness of a current-breaking insulator.

The scientists turned to scanning near-field optical microscopy (SNOM) to examine the spectroscopic sheen on the HIB pathways. But this technique, which funnels light through a gilded glass capillary, has a resolution limit of about 100 nanometers—much too large to examine the nanoscale superconducting interfaces.

Fortunately, Gozar built a specialized instrument to radically increase the spectroscopic resolution. The machine, built entirely at Brookhaven Lab and now housed at Yale, combines SNOM with atomic force microscopy (AFM). Like a record player’s needle extracting sound from the texture of vinyl, an AFM needle travels over a material and reads the atomic topography.

“Here, the AFM needle acts like a lightning rod, channeling the SNOM light down to just tens of nanometers,” Gozar said. “We have simultaneous AFM topography and spectroscopic data on the deep chemical structures.”

Crucially, Gozar’s AFM-SNOM system also operates at the cryogenic temperatures required to test these materials—a capability only offered at a few laboratories in the world.

The rough, bright patches reveal details of the never-before-seen damage dealt by the helium ion beam used to carve channels in an attempt to create the conditions for superconductivity.

The novel technique revealed the unexpected and widespread damage left in the wake of the helium ions. Despite the 0.5-nanometer focus of the beam, its effects rattled atoms across a 500-nanometer spread and altered the structure enough to prevent superconductivity. For nanomaterial construction, this so-called lateral straggle is utterly untenable.

“Even the slightest nudge at this scale shatters the powerful phenomena we mean to exploit,” Litombe said. “High-temperature superconductivity can have a coherence distance of just a few atoms, so this lateral effect is devastating. We are, of course, still thrilled to explore the never-before-seen details.”

Added Bozovic, “In one sense, the whole result was negative. Our initial goal of creating nanometer-thick superconducting wires was not fully accomplished. But figuring out why has opened some truly exciting doors.”

The SNOM-AFM technique is readily applicable to fields such as plasmonics for display technology and the study of the mechanism behind high-temperature superconductivity.

“The nanoscale resolution and the tomographic capabilities of the instrument, put us on the cusp of uncovering new truths about nanoscale phenomena and the technology it empowers,” Gozar said.

This research was supported by the U.S. Department of Energy’s Office of Science and the Gordon and Betty Moore Foundation.