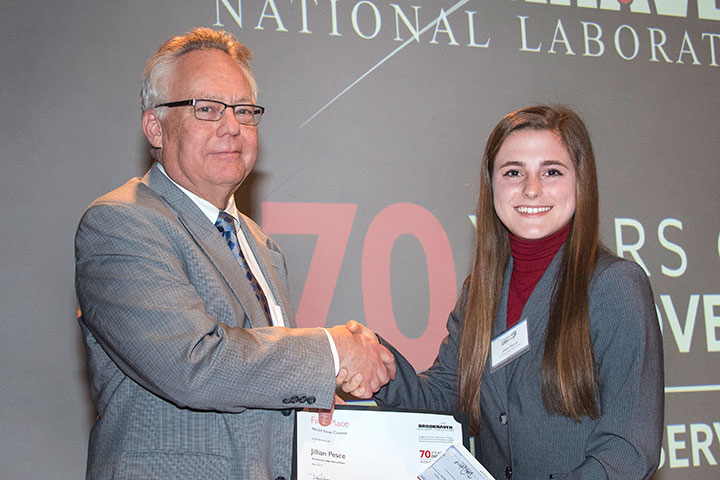 enlarge
Brookhaven National Laboratory is celebrating two milestone anniversaries in 2017: 70 years since the Laboratory's founding in 1947 and a century since the 1917 founding of Camp Upton, the former U.S. Army base located where the Lab operates today.

To honor these milestone anniversaries, all that has been accomplished, and the Laboratory's ongoing explorations at the frontiers of scientific discovery, the Lab’s Stakeholders Relations Office coordinated an essay contest for high school students in Nassau and Suffolk counties. The contest was sponsored by Brookhaven Science Associates—the company that manages Brookhaven Lab for the U.S. Department of Energy's Office of Science—with a top prize of $500.

To enter, the students submitted an essay that answered the question, "With seven decades of discovery behind us, what’s your vision for the future?“ High school students from across Long Island—from Mineola to Greenport—submitted essays for this contest.

Students then selected one of several iconic Camp Upton/Brookhaven National Laboratory images and were asked to use examples of events and discoveries associated with that image over the past 70 years to make the case for how this work has affected their life, Long Island, or the nation—and where they think the research may go in the future.

A panel of judges at the Laboratory selected the top three essays. As the overall winner, Jillian Pesce of Smithtown High School East got to read her essay, “70 Years of Collaboration, Celebration, and Acceleration,” to a packed auditorium at the Long Island STEM Hub celebration held at the Lab on April 18 (see video). For her essay topic, Pesce selected an image of a lone scientist sitting amidst magnets awaiting installation in the accelerator ring at Brookhaven’s Alternating Gradient Synchrotron, home to three of the Lab’s seven Nobel Prizes. 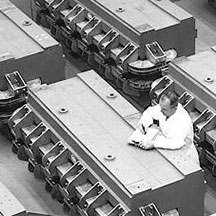 Pesce admitted she was a little nervous when she arrived to the Lab and saw how many people were in the auditorium. “I had the jitters at first—after all, I’m speaking to an audience of prestigious researchers,” said Pesce.  “But, once I realized what a phenomenal opportunity this was I knew I could read my essay steadily and precisely.”

When she finished reading her essay, Pesce received a standing ovation. She was presented with a check by Laboratory Director Doon Gibbs, who also gave her accolades for a job well done in outlining accelerator science in such a creative manner. “That was an impressive performance,” Gibbs told Pesce.

Joe McInnis from Greenport High School earned second place with his essay, “The Evolution of Positron Emission Tomography (PET) and How it Will Save Us All.” Third place went to Izzy Schlichting of Mineola High School for her essay, which focused on the development of radiotracers and PET and its impact on cancer studies. McInnis and Schlichting received $250 and $100, respectively.

Smiling as she left Berkner Hall with her family and teacher, Pesce added, “This is a day I will always remember.”