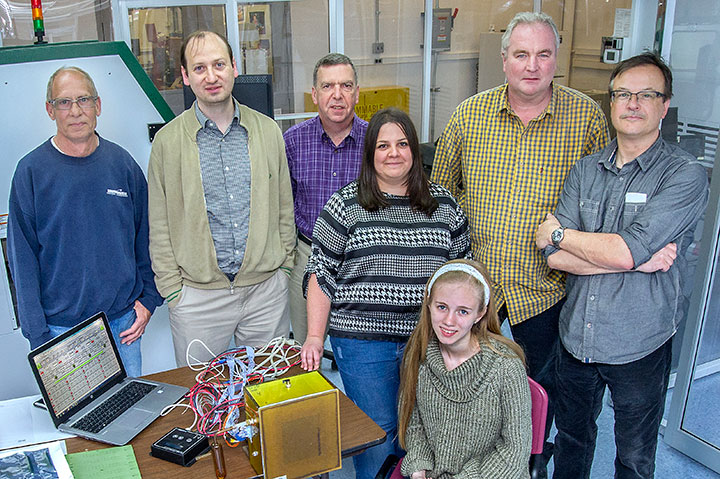 When Patchogue-Medford High School student Mykaela Reilly came to the U.S. Department of Energy’s Brookhaven National Laboratory as part of the High School Research Program last summer, she thought she was coming to work for one summer. She never expected that her achievements would result in her being offered to continue at the lab another year.  From soldering to building prototypes to computer programming, Reilly says that during the course of the year she learned a lot about how research projects come together and form the foundations of scientific discovery.

Reilly was tasked with learning LabView, a software system and design program that helps scientists with data acquisition and instrument control. She also programmed micro-controllers used to monitor nitrogen levels to keep humidity low, limit condensation, and maintain steady temperatures inside an experimental area. It took weeks to build the experimental components and test the software that would remotely control that equipment. But, with guidance from her mentor, Lab physicist Alessandro Tricoli of the ATLAS silicon tracker upgrade group in the Physics Department, and research team members Phil Kuczewski and Stefania Stucci, Reilly worked out the “bugs” until she built a sensing system and computer program that her mentors say works seamlessly. 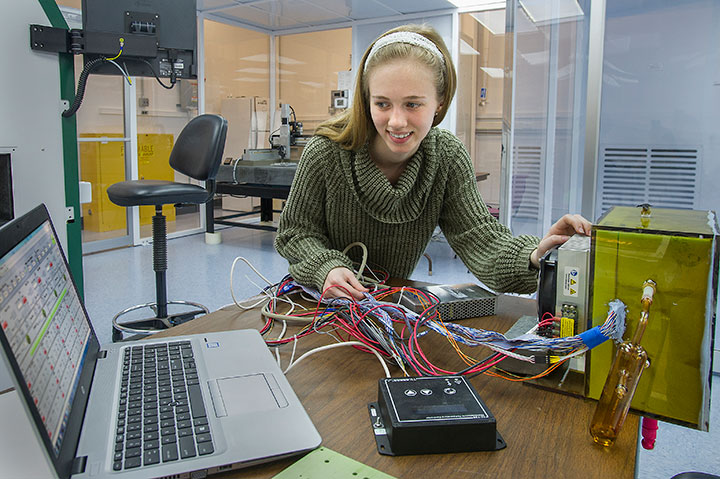 Reilly’s success may help advance one of the most ambitious scientific projects in the world—the ATLAS detector at the Large Hadron Collider (LHC) near Geneva, Switzerland. Brookhaven scientists have played multiple roles in constructing, operating, and upgrading this particle detector, which is the size of a seven-story building and has opened up new frontiers in the human pursuit of knowledge about elementary particles and their interactions. Reilly conducted experiments using her remote monitoring program to see how electronic components, such as readout chips that could be incorporated in an upgrade at ATLAS, respond to tough environmental conditions—particularly the high level of radiation at the LHC. Radiation-resilient silicon readout chips would reduce power consumption and simplify the design of the entire tracker system at ATLAS.

“Mykaela’s work will shed light on how we can make  the readout chips more resistant to the radiation at the LHC,  and how we can keep the radiation effects under control,” said Tricoli. “I applaud her success. With her talent, I hope she decides to pursue a career in science or engineering.”

Just before the posting of this story, Reilly announced her plans to attend Stony Brook University to pursue a degree in electrical engineering. “That is wonderful news,” said Tricoli. “I hope to see her back at the Lab soon.”