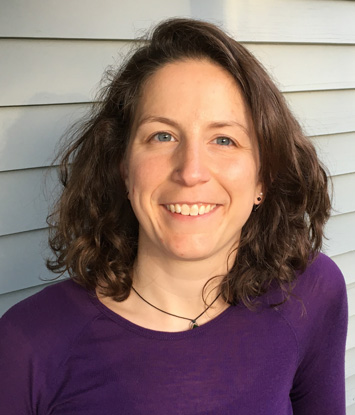 This year's Julian Baumert Thesis Award recipient is Kelli Hvorecny of Dartmouth College, who completed the requirements for her Ph.D. in March and will receive her degree in June. Hvorecny was chosen based on her work into the molecular mechanism and virulence of a protein secreted by the bacterium Pseudomonas aeruginosa during its infection of airways, which she studied in part at beamline X6A of Brookhaven National Laboratory’s former National Synchrotron Light Source, a U.S. Department of Energy Office of Science User Facility, which has since been succeeded by the National Synchrotron Light Source II (NSLS-II). Pseudomonas aeruginosa is widely present in the environment and resulting infections are most likely to strike hospital patients or those with weakened immune systems.

The Baumert award is given annually to a researcher who has recently conducted a thesis project that included measurements at NSLS or NSLS-II. It was established in memory of Julian David Baumert, a young Brookhaven physicist who was working on x-ray studies of soft-matter interfaces at NSLS before he died in June 2006.

Hvorecny's adviser, Dean R. Madden, a professor in Dartmouth's Department of Biochemistry & Cell Biology, calls her “a rising star, [who is] on track to become a leader in academic research and teaching.”

Hvorecny began her research just after the Madden group had identified one of the bacterium's virulence factors (molecules that add to the overall infection potential of bacteria and viruses), known as CFTR inhibitory factor (Cif). It is named after a cell-membrane ion channel, the cystic fibrosis transmembrane conductance regulator (CFTR), that is defective in patients with cystic fibrosis (CF), a genetic condition that severely impairs the function of the lungs and digestive system. In particular, CFTR regulates the salt and water balance required for effective mucociliary clearance—the process by which inhaled bacteria are trapped in mucus, and then transported out of the airway by tiny hairs called cilia.

The group had found that Cif causes CFTR to undergo degradation after endocytosis, in which surface molecules, such as proteins, are internalized in vesicles that "pinch off" from the membrane. They reasoned that this degradation should enable Cif to interfere with mucociliary clearance, providing the bacterium with a way to infect people without CF. But, when Hvorecny joined the group, there were no data that directly tested this assumption. Additionally, and equally problematically, the group knew of no biological substrates that Cif would interact with to cause its effects.

With all of this in mind, Hvorecny first determined the crystal structures of some Cif mutants with various xenobiotic (foreign to the body) substrates, helping to uncover how it operates as an enzyme. This work was done at the NSLS and, through the NSLS transition program, at the Stanford Synchrotron Radiation Laboratory, another DOE Office of Science User Facility. Then, working from those structural insights, she identified a series of substrates among human fatty acids, including one that, quite surprisingly, modulates and helps to resolve inflammatory responses.

This work revealed a new pathway for the group's research efforts and yielded a multi-university collaboration, which Hvorecny spearheaded. This partnership confirmed the inflammatory effect of Cif in cellular models and in airway samples from CF patients.

At the same time, Hvorecny was developing a new model for mucociliary transport in reconstituted epithelial cells, which make up the tissue that lines most cavities and surfaces of the body, such as the walls of blood vessels and organs. Also, by starting with a model of pneumonia in mice, she confirmed that Cif is a potent and rapid inhibitor of the body's bacterial removal process.

Finally, she determined structures of Cif in complex with inhibitors that were found via a screening process and then coordinated a structure-based drug-design collaboration that found inhibitors with improved selectivity. The initial structure, from which the drug design was based, was the result of data taken at NSLS beamline X6A.

“Like the best science, Kelli's work brought clarity and understanding and, in doing so, uncovered brand-new areas of investigation,” said Madden. “She is a truly versatile scientist, but she is also a structural biologist's structural biologist—always seeking better conditions, sweating the details of analysis, and training new students.”

The award was announced on May 24 during the 2017 NSLS/Center for Functional Nanomaterials Joint Users' Meeting. In addition to the award, Hvorecny will receive a $600 honorarium.