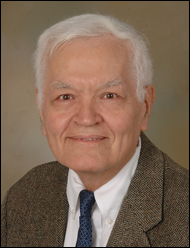 James Glimm, a staff member of Brookhaven National Laboratory’s (BNL) Computational Science Center (CSC) and chair of the Department of Applied Mathematics & Statistics at Stony Brook University (SBU), has been named a Fellow of the Society for Industrial and Applied Mathematics. The professional organization is beginning their Fellowship program this year, and Glimm is one of 183 members who are being honored as Fellows for their distinguished contributions to their field.

“Science for me is the ultimate adventure of the human mind,” Glimm said. “I am honored by this recognition for my research spanning multiple areas of pure and applied mathematics, theoretical physics, and computation.”

Glimm has made outstanding contributions to shock wave theory, in which mathematical models are developed to explain natural phenomena that involve intense compression, such as air pressure in sonic booms, crust displacement in earthquakes, and density of material in volcanic eruptions and other explosions. He also has been a leading theorist in operator algebras, partial differential equations, mathematical physics, applied mathematics, and quantum statistical mechanics.

After earning a B.A. in engineering from Columbia University in 1956, Glimm went on to receive a Ph.D. in mathematics from Columbia in 1959. He joined BNL in 1999 as director of the Center for Data Intensive Computing (CDIC), a position he held until 2004, when the CSC replaced the CDIC, thereby expanding computing capabilities at BNL in numerous areas of science. From 2004 to the present, Glimm has overseen the applied mathematics program at the CSC. Glimm has been Distinguished Professor and Chair of Applied Mathematics & Statistics at SBU since 1989.

Glimm has received numerous awards for his work, including the 2002 National Medal of Science, the 1993 American Mathematical Society’s Steele Prize for a paper of fundamental importance, the Dannie Heineman Prize for Mathematical Physics in 1980 and the New York Academy of Sciences’ Award in the Physical and Math Sciences in 1979.