The following feature article was published today by the Atmospheric Radiation Measurement (ARM) Climate Research Facility, a multi-laboratory, U.S. Department of Energy (DOE) Office of Science User Facility and a key contributor to national and international climate research efforts. Scientists from DOE’s Brookhaven National Laboratory participated in the 2015 to 2017 ARM West Antarctic Radiation Experiment (AWARE), the most comprehensive meteorological field campaign in West Antarctica since 1957. For more information about Brookhaven Lab’s contributions to this research, see this story about the launch of the AWARE campaign, or contact Karen McNulty Walsh, kmcnulty@bnl.gov, (631) 344-8350.

One day in December of 2015, bound for a remote ice camp in the interior of Antarctica, Scripps Institution of Oceanography doctoral student Ryan Scott boarded a ski-equipped LC-130 turboprop transport plane at McMurdo Station at the south tip of Ross Island. It was austral summer and the temperature outside hovered around -4 degrees Celsius.

Scott was part of the 2015 to 2017 ARM West Antarctic Radiation Experiment (AWARE), the most comprehensive meteorological field campaign in West Antarctica since 1957. He was stationed in the remote West Antarctic Ice Sheet (WAIS) ice camp, where scientists spent 45 days collecting first-ever surface measurements of clouds and radiation. The main AWARE site, far more heavily instrumented and researched, was at McMurdo.

In mid-January 2016, Scott and other AWARE scientists got a bonus: a close-up view—with instruments—of an extensive summer surface melt event on the WAIS. It affected 915,000 square kilometer, an area more than twice the size of California. The temperature rose rapidly, imparting a mugginess to the air that Scott compared to stepping off a plane in Miami after a visit to wintry New York.

The surface melt event inspired a paper that appears in the June 15, 2017, issue of Nature Communications.

“We were very lucky,” says co-author and Ohio State University (OSU) atmospheric scientist David Bromwich, who co-wrote the 2015 AWARE science plan. “We wouldn’t have known about this [surface melt event] without instruments and scientists at the WAIS Divide.”

The WAIS Divide ice camp was upslope and downwind from the surface melt event, an 1,801 meter-high vantage point just on the edge of the affected area. Scott, who spent five weeks there in a tent staked into the snow, had an unexpected front-row seat to what lead author Julien P. Nicolas (who is at OSU) calls “one of the most prominent events we’ve seen since 1978.” 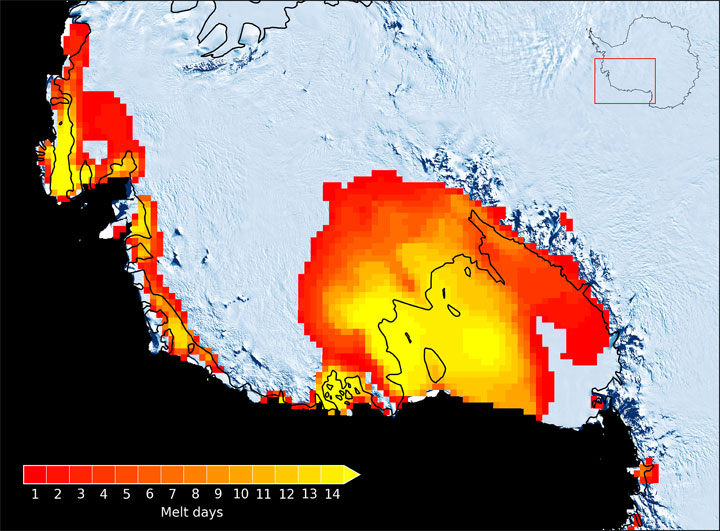 Nicolas described the 11-day warming event in January 2016 as having the second greatest melt intensity behind one recorded by satellite during the austral summer of 1991 to 1992.

At the WAIS Divide ice camp, a smaller suite of instruments was in place compared to the main AWARE site at McMurdo. Scott monitored the weather, measured snow moisture, launched radiosondes, cleaned instruments, checked data quality, and took regular photos of snow grains—the kind that pattered against his tent like bird shot as he was trying to sleep.

On January 10, from a 6- by 10-foot instrument shed arrayed with computers, Scott watched the temperature rise fast, from -20 Celsius to near zero, an astonishing spike in the mercury considering the camp’s high elevation and the position of the sun at the time; it was low on the horizon.

“Once that warm air hit, it was relatively humid and muggy,” says Scott. “I knew something was up.” He soon alerted other scientists, including Scripps research physicist Dan Lubin, lead principal investigator for AWARE.

Everyone in the AWARE campaign, of course, wanted to see and measure a melt event. But the traditional window to see such events usually passes by early January every year, says Nicolas. That made the mid-January warming in 2016, closely recorded by ARM instruments, a happy accident that came just in time. Not long after, instruments at the WAIS Divide camp were packed up and shipped out.

“The atmospheric flow that caused [the surface melt event] passed over the ARM site at WAIS Divide,” says Bromwich. Those direct ARM measurements of the atmospheric conditions provided a clear picture of clouds over the WAIS Divide, including data on liquid water, ice phase, and mixed phase clouds.

A robust array of ARM instruments

Observations at the WAIS Divide on clouds, surface energy budget, and on atmospheric moisture and temperature came from a series of ARM instruments. Radiosonde balloons—the first there since 1967—were launched four times a day in the site’s 24-hour daylight, yielding vertical profiles of temperature and water vapor.

Vogelmann helped the AWARE team determine which subset of instruments to include for maximum benefit in the WAIS Divide deployment, where space was at a premium. Meanwhile, the main body of ARM instrumentation resided at McMurdo. He says the site separation is parallel to the idea of a central observation facility augmented by an extended facility on the periphery of the main realm of observation. (The two sites are 1,600 kilometers apart. WAIS Divide is open only in summer.)

The challenge was getting everything for the Divide into one sea container, he says. The instruments also had to be versatile and robust enough to make the journey into the harsh interior of an already harsh place. (Instrument engineer for AWARE at WAIS Divide was Heath Powers from Los Alamos National Laboratory.) For observing the surface energy budget during the surface melt event, says Vogelmann, the chosen instruments “worked out incredibly well.”

In the paper, Figure 4 demonstrates how the surface energy budget was derived. The last panel shows the surface energy gain in the first 17 days of that January. Plainly, nature had turned the burners on high from January 10 to 14, a period the paper describes as Phase 1 of the surface melt event.

Without ARM instruments we could have only known from satellites that something was going on. We would not have had this picture from the surface to help us understand what was really happening.

“You got this huge build-up” of net surface energy gain, says Vogelmann, and it was supported by contemporaneous satellite data.

Phase 2 (January 15 to 21) represents the next four days, when surface energy gain started to sink back to the normal range. Such surface melt events have occurred in the past, he says, “but without ARM instruments we could have only known from satellites that something was going on. We would not have had this picture from the surface to help us understand what was really happening.”

Interactive puzzle of ENSO and SAM

In the Nature Communications paper, Nicolas, Bromwich, and others at OSU’s Byrd Polar and Climate Research Center used satellite data to measure the extent and duration of the melt event; to examine the atmospheric circulation that led to it; and to run model simulations of two large-scale modes of climate variability: the El Niño Southern Oscillation (ENSO), a recurring Tropical Pacific climate pattern, and the Southern Annular Mode (SAM), a westerly wind belt that during its “positive” phase contracts protectively toward Antarctica. 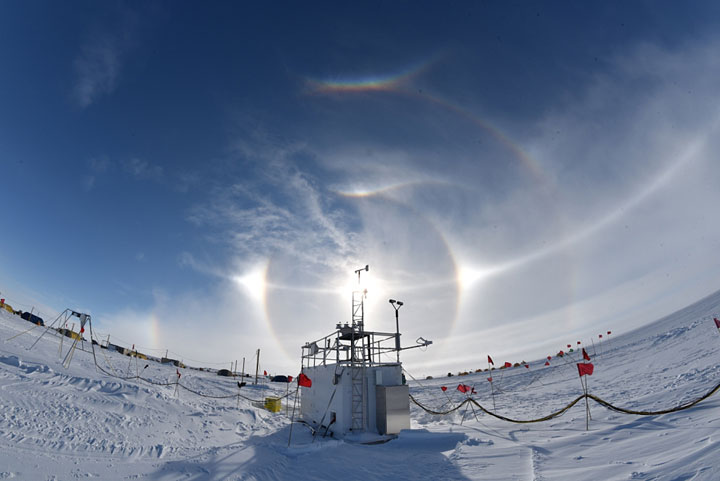 The January 2016 surface melt event coincided with one of the strongest El Niño events on record. These warm phases of ENSO tend to shift warm air towards Antarctica’s temperature-vulnerable Ross Ice Shelf. On the other hand, the SAM (when in its positive phase, as it was in January 2016) often blocks the warm air like a kind of atmospheric fence. As the paper notes, understanding the roles of ENSO and SAM in such Antarctic surface melting events would provide insight into their future likelihood.

So far, the mechanisms are not clear, though it is likely, the paper says, that a predicted future of more extreme and frequent El Niño patterns could mean more prolonged summer melt events in the WAIS.

Grasping the ENSO-SAM interactions with the ice sheet of West Antarctica is consequential.

“The ice sheet was gone in previous warming periods,” says Bromwich, pointing to the Earth’s last inter-glacial period about 125,000 years ago. Conditions then, he added, “were only a little warmer than today”—and yet the sea level was 6 to 9 meters higher than it is now. How much came from the WAIS is presently uncertain.

One key point of the new paper, agreed Bromwich and Nicolas in a joint phone interview, is that scientific attention is now shifting from a traditional sense of Antarctica’s ice-melt susceptibility (warm ocean water underneath the coastal ice shelves) to a sense that it is also influenced by a warming atmosphere, which spurs surface melting.

It’s an idea pointedly made in a 2016 Nature paper (cited in the Nature Communications article) on the continent’s contribution to past and future sea level rise.

“There is a lot of work to be done with climate models and teleconnections,” says Bromwich, which are climate features related to one another at long distances, over thousands of kilometers. “We’ll see what these can tell us about the future.”

AWARE benefited from having instruments in the right place at the right time to observe and record such an extensive summer surface melt event. “It was an extraordinary piece of good luck,” agrees Lubin. But more broadly, the data gathered during AWARE “will have a great deal of longevity,” he says. “They are very unique, very powerful data sets.”

Lubin and Bromwich had tried for years to propose Antarctic projects that were the investigative predecessors of AWARE and had come close to funding several times. Finally, the science stars aligned because of the ARM Mobile Facilities, says Lubin. “The timing was just right,” he says.

The first of these portable instrumented observation platforms, available by a competitive proposal process, was launched in 2005; now there are three.

There is momentum in southern latitudes research. This September, ARM will launch the Measurements of Radiation, Aerosols, and Clouds over the Southern Ocean (MARCUS) campaign using its second mobile facility designed with ship deployments in mind. It will unfold off the coast of Antarctica on the Australian Antarctic supply vessel Aurora Australis, in a usually pristine region tossed by epic storms, winds, and waves.

Moreover, extensive surface melt events in West Antarctica continue to happen. Scott pointed to one this past January in the Ross Sea sector.

He is currently funded by a NASA Earth and Space Science Fellowship and is one of many scientists busy grappling with AWARE data sets. Scott is lead author on a paper cited in the Nature Communications article and has another on the way based on earlier (though less extensive) melting events he found in online satellite data from 1973 to 1978.

Scott, slated to get his doctorate next year, would like to spend years scouring AWARE data for insights into the consequential fate of ice cover in Antarctica. Most of the measurements are from ARM instruments that had been sited at McMurdo on Ross Island, he says. “It’s the first time Antarctica has seen data like this.”