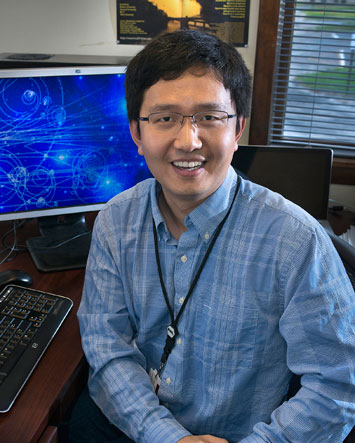 The European Physical Society (EPS) has awarded the 2017 Young Experimental Physicist Prize to Xin Qian, a physicist at the U.S. Department of Energy’s (DOE) Brookhaven National Laboratory, for his critical contributions to the Daya Bay reactor neutrino experiment. In addition to the construction of the detector calibration units, Qian developed and applied data analysis techniques for the Daya Bay experiment that revealed a long-sought characteristic of neutrinos. The discovery opens the door to further exploration of some of the biggest mysteries about our universe.

The Daya Bay reactor neutrino experiment is a collaboration of predominantly U.S. and Chinese scientists located in southern China, near Hong Kong. They seek to better understand how neutrinos, abundant neutral particles that are nearly undetectable, change their identities between three distinct “flavors.”

Until 2012, physicists had only measured two of three “mixing angles” that describe the flavor-changing behavior of neutrinos, and were on the hunt for the third. Finally, on New Year’s Day 2012, the Daya Bay collaborators saw signs that they had found what they’d been looking for—a measurement of one type of neutrino oscillation that would determine the third mixing angle, and with the highest precision to date*. “It was very exciting,” says Qian about the discovery. “I think my coworker Chao Zhang may still keep our messages from that day.”

The discovery reveals many new research paths in neutrino physics that we are excited to explore.

The EPS is honoring Qian for his crucial analysis of the Daya Bay data that lead to this breakthrough. But, he insists, “It really was a collaborative effort involving many people.” The award is a “recognition of the hard work we put in all those years and gives a lot of encouragement for us to continue. The discovery reveals many new research paths in neutrino physics that we are excited to explore, such as the precise measurement of the frequency of neutrino oscillation.”

The discovery at Daya Bay was another step on the road to answering one of the most captivating questions in physics today: Can neutrinos help explain why we are made of matter, not antimatter?

At the moment of the Big Bang, matter and its natural counterpart, antimatter, erupted into existence in equal amounts. Yet particles and their respective antiparticles annihilate upon contact, eventually leaving behind only light. So, if matter and antimatter each follow the same rules, nothing should have been left in the universe—we wouldn’t exist! Something must have given matter a leg up over antimatter, and physicists are trying to find out exactly what that was.

“You can imagine that if you produce equal amounts, but at the end of the day there are different amounts, the rules that govern matter and antimatter must be different,” says Qian.

He hopes neutrinos hold the key. They just might break the symmetry between matter and antimatter in a way that would explain our matter-dominated cosmos. Because Daya Bay’s discovery opens up further opportunities to explore the nature of neutrinos, it allows physicists to continue asking with future experiments: why are we all here?

“It’s a big question I can easily explain to my mom or to my grandpa,” says Qian, “It’s easy to get why this stuff is important.”

Xin Qian earned a Ph.D. in experimental nuclear physics from Duke University in 2010, after receiving a B.S. in physics from Peking University in 2003. He began contributing to the Daya Bay collaboration in 2010 as a Robert A. Millikan Postdoctoral Scholar in Experimental Physics at the California Institute of Technology. In 2013, Qian joined Brookhaven Lab's Physics Department as a research associate, became an assistant physicist that same year, and was promoted to associate physicist in 2015. In 2014, Qian won Early Career Research funding from DOE to develop neutrino detectors for the US-based international Deep Underground Neutrino Experiment (DUNE) that is under construction, and has since led the Brookhaven Lab MicroBooNE group that is pioneering those detectors.

Brookhaven Lab’s participation in the Daya Bay experiment is funded by the DOE Office of Science (HEP, NP).