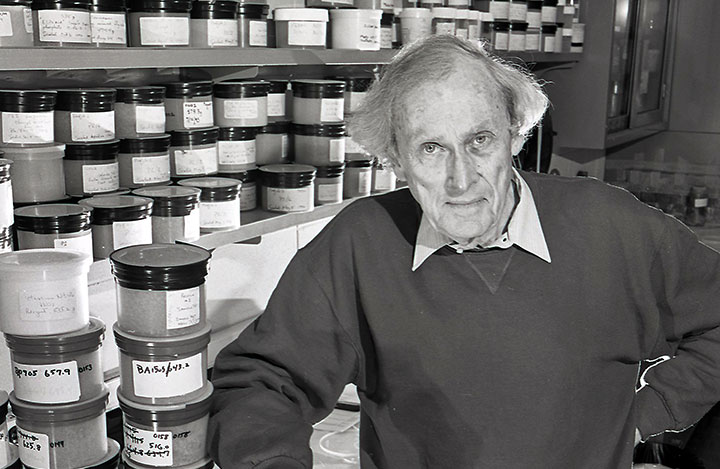 Harbottle worked in the Chemistry Department, and was named senior scientist emeritus in 2012 on the basis of his distinguished contributions to nuclear science and to the application of advanced nuclear detection techniques to archaeology and the fine arts. The following was written by Diane Greenberg at the time of Harbottle's emeritus appointment.

In his initial research in nuclear science, Harbottle determined the decay schemes and half-lives of radionuclides. With David Alburger of Brookhaven Lab’s Physics Department and Elinor Norton of the Chemistry Department, he calculated the half-life of silicon-32, the last natural radioisotope whose half-life had not been determined accurately. At the Graphite Research Reactor and later at the High Flux Beam Reactor, Harbottle performed basic research on “hot atoms” — atoms that have captured a neutron and momentarily have a large amount of kinetic energy. He also contributed to the development of nuclear instrumentation. With former Lab scientists Edward Sayre and Raymond Stoenner, he developed a small-scale gas counter in the late 1970s that was the first instrument to perform radiocarbon dating of milligram samples. 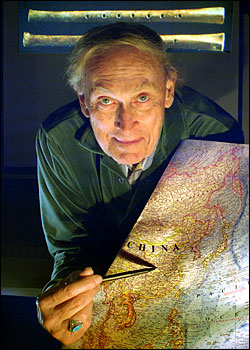 The pioneering work of Harbottle and Sayre in the application of nuclear techniques, especially neutron activation analysis, to the determination of the provenance of artifacts of archeological significance, including works of fine art and sculpture, gave a new scope to the work of archaeologists and art historians. For example, Harbottle and Phil Weigand of Stony Brook University traced out pre-Columbian trade routes in turquoise used in transporting the raw material for Mesoamerican religious jewelry from mines in the American Southwest to markets in central Mexico.

Harbottle and former Brookhaven Lab collaborator Lore Holmes identified the geographical origins of celebrated limestone sculptures created in France during the ninth through fifteenth centuries. The results of this research were highlighted in an exhibition called “Set in Stone: The Face in Medieval Sculpture,” presented at the Metropolitan Museum of Art from September 26, 2006, to February 19, 2007. The Brookhaven Limestone Database Project is now affiliated with more than 33 museums in the U.S., France, and Great Britain. 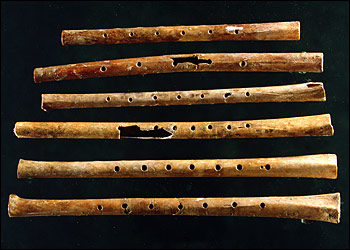 In the late 1990s, Harbottle was a member of the research team in China that uncovered six complete crane-bone flutes between 7,000 and 9,000 years old, along with 30 other flutes at an early Neolithic site in Jiahu in Henan province, China. Several flutes may be the earliest playable instruments to be dated and acoustically analyzed.

In 2002, Harbottle, with collaborators from the University of Arizona and the Smithsonian Institution, used carbon-dating technology to determine the age of a controversial parchment that might be the first-ever map of North America. The scientists concluded that the so-called “Vinland Map” parchment at Yale University dates to approximately 1434 A.D., nearly 60 years before Christopher Columbus set foot in the West Indies. While the date of the parchment cannot prove that the map is authentic, it is an important piece of evidence to be considered by those who argue that it may be a forgery.

After he retired, Harbottle served on the Board of Consulting Editors, Studies in Archeological and Museum Science, and as a member of the Honors and Awards Committee of the American Nuclear Society. He was a research associate in the Medieval Department of the Metropolitan Museum of Art.

After the events of 9/11, Harbottle began work on projects of potential interest to the Department of Homeland Security. With Walter Kane of the Lab’s Nonproliferation and National Security Department, he performed a number of studies, including the construction and bench testing of an improved portable instrument for detecting nuclear materials.

Harbottle earned a B.S. in chemistry from the California Institute of Technology in 1944 and a Ph.D. in chemistry from Columbia University in 1949. He joined Brookhaven Lab’s Chemistry Department in the same year as an associate chemist, and he worked his way through the ranks to become a senior chemist in 1968, having received tenure in 1957. He was a Guggenheim Fellow at Cambridge University, 1957-1958, and he taught radioisotope procedures at the American University in Beirut, Lebanon in 1959. From 1965 to 1967, he directed the Division of Research and Laboratories at the International Atomic Energy Agency in Vienna. He also has been an adjunct/research faculty member of Stony Brook University intermittently from 1983 to the present.

Harbottle was the recipient of numerous awards, including, with Edward Sayre in 1983, the George Hevesy Medal for outstanding accomplishment in radioanalytical chemistry; the Society for American Archaeology’s Roald Fryxell Medal for interdisciplinary research in 1994; the American Nuclear Society’s Seaborg Medal in 1995, which honors excellence in research that has been especially beneficial to the development of the peaceful uses of atomic energy; and the American Institute of Archaeology’s Pomerance Medal in 2002 for his scientific contributions to archaeology.

He was predeceased by his wife of 64 years, Naomi, and is survived by his daughter Laura.