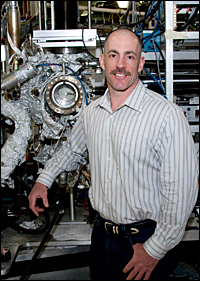 The National Synchrotron Light Source (NSLS) User Executive Committee will give this year's Community Service Award to NSLS Safety Engineer Keith Klaus for outstanding service, innovation, and dedication to users of the NSLS. The award will be presented today as part of the NSLS-CFN Joint Users' Meeting.

Klaus has worked at the NSLS for about two years and at Brookhaven for about 10. He received his bachelor's degree in geological sciences in 1994 from the State University of New York at Buffalo and his master's degree in hydrogeology and MBA from Stony Brook University in 1997 and 2007, respectively. He first worked at Brookhaven for a year as a hazardous waste technician and, after four years of geosciences-related work at outside companies, he rejoined the Laboratory's Environmental Restoration Division as a hydrogeologist in 1999. In 2004, he became an environmental compliance representative for multiple Brookhaven departments. He joined the NSLS in 2007 as safety engineer. In this role, Klaus is responsible for conducting the departmental Environmental, Safety, and Health inspection program. He also is in charge of the NSLS Chemical Management Program and the NSLS Hazardous and Radioactive Waste Program.

Klaus will receive a $250 gift certificate and his name will be engraved on the plaque on display in the NSLS lobby.