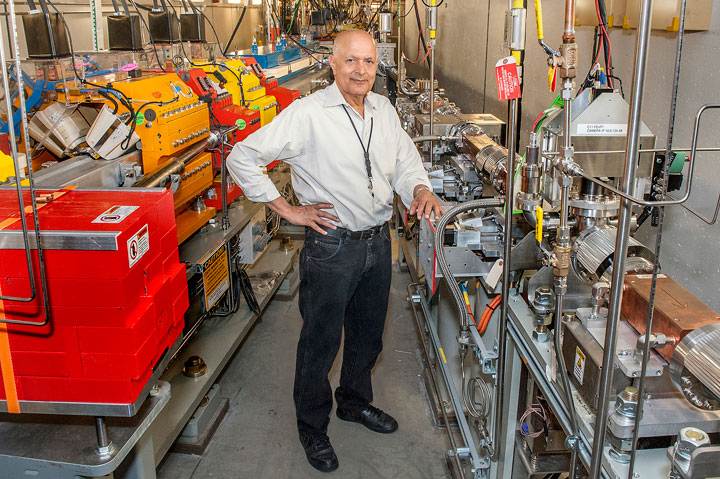 Brookhaven engineer Sushil Sharma stands with the NSLS-II electron ring on the left and an x-ray beamline on the right.

Researchers at the U.S. Department of Energy’s (DOE) Brookhaven National Laboratory have developed a less expensive and more efficient way of controlling x-ray beams used to study the intricate details of batteries, solar cells, proteins and all manner of materials. The new beam-shaping devices, invented by Brookhaven mechanical engineer Sushil Sharma, can be made from a single piece of copper, which dramatically reduces the time and complexity of their construction – and their cost. It’s no wonder that x-ray light sources around the world, including Brookhaven Lab’s National Synchrotron Light Source II (NSLS-II), are beginning to choose the new designs over their more complex and expensive predecessors.

Synchrotron light sources like NSLS-II, a DOE Office of Science User Facility, produce very powerful beams of x-rays by wiggling the path of electrons speeding through a circular ring at 99.99 percent the speed of light. The wiggles cause the electrons to emit x-rays, which are channeled into beamlines to allow scientists to study things we can't see with the naked eye—from biological cells all the way down to single atoms. When NSLS-II is fully built, it will have more than sixty beamlines doing research on many diverse topics, from human proteins to artificial photosynthesis, advanced batteries, and interplanetary dust particles.

“I find it exciting to work in a facility where research is happening that could change people’s lives in the future,” said Sharma.

The beams of x-rays that NSLS-II produces, however, are very powerful and must be well-controlled to deliver the right intensity to each beamline. Numerous “beam-intercepting devices” take on this role, each performing a slightly different job: splitting up the beam, decreasing the beam’s size, or shielding heat-sensitive components from the x-rays.

Conventionally, engineers constructed all of these devices using multiple parts—a middle portion made of a copper alloy, and stainless-steel end pieces that form a vacuum seal with the beamline. Unfortunately, this design requires time-intensive, high-temperature processes to put all the parts together, and an expensive proprietary copper alloy that can withstand the heat of production. According to Sharma, it takes anywhere from six to nine months to obtain the alloy and make these devices.

“We’d been doing it this way for 25 years, but the whole process was time-consuming and not very reliable. It was a challenging problem for the light source facilities,” he said. “I started thinking—why don’t we make the entire piece from one material? It took some focused effort in design and testing, but this is the outcome.”

A description of Sharma's new design for beam-intercepting devices.

With the help of NSLS-II engineers Christopher Amundsen, Frank DePaola, Lewis Doom, Muhammad Hussain, and Frank Lincoln in developing and testing the new devices, Sharma’s vision came to life. The new design gets rid of the stainless-steel end pieces—instead, the copper itself is shaped to make a tight vacuum seal with the beamline. As a result, the devices are made from a single piece of copper, eliminating the time-intensive, high-temperature processing and the need for a proprietary heat-resistant copper. In place of the costly material, the new design uses a widely available copper alloy sold at a quarter of the cost. Overall, Sharma’s design is half the price of the conventional devices, which ranged from $5,000 to $25,000 each.

The one-piece design also significantly reduces production time. In 2016, this was put to the test at Brookhaven Lab when conventional devices that had been previously ordered failed to arrive due to manufacturing issues. Needing a quick replacement to get the beamline working, the Lab made the devices in an onsite machine shop using Sharma’s new design. It took them only ten days to produce three, whereas even the first step of obtaining the heat-resistant copper alloy for one conventional device could have taken months.

So far, NSLS-II has incorporated forty of the new devices into its beamlines. And, after a year of operation here at Brookhaven Lab, said Sharma, “the devices are still doing their jobs perfectly.”

Sharma’s work at Brookhaven Lab is funded by the DOE Office of Science.