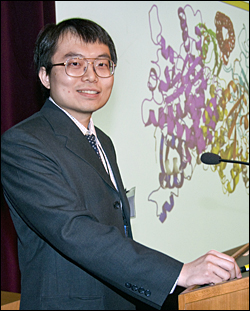 Chuan-Hsiang Huang, a post-doctoral fellow at The Johns Hopkins University School of Medicine, is the winner of this year's National Synchrotron Light Source (NSLS) Julian Baumert Ph.D. Thesis Award for his work on solving the structure of a protein frequently mutated in human cancers. The prize, now in its third year, is given to a researcher who has recently conducted a thesis project that included measurements at the NSLS. It was established in memory of Julian David Baumert, a young Brookhaven physicist who was working on x-ray studies of soft-matter interfaces at the NSLS before he died in June 2006.

Huang will receive his Ph.D. in immunology from Johns Hopkins University in May 2009. Most of the measurements for his thesis, titled "Insights into Oncogenic Mutations from a Human PI3Kα Structure," came from x-ray diffraction experiments at NSLS beamlines X6A and X29A.

"Chuan-Hsiang is a devoted and enthusiastic scientist who is willing to take on challenges and to tackle those hard, yet important problems," said L. Mario Amzel, Huang's advisor and director of the Biophysics and Biophysical Chemistry program at the Johns Hopkins University School of Medicine. "While interested in understanding basic biological mechanisms, he never loses sight of their implications in human health."

Before starting the Johns Hopkins graduate program in 2004, Huang received his M.D. from the National Taiwan University and completed two years of medical residency in the field of internal medicine. His medical background prompted him to choose a project with clinical applications -- specifically, using x-ray diffraction methods to determine the three-dimensional structure of the protein PI3Kα. This enzyme is often mutated in numerous types of human cancers, but for many years it was unknown how those mutations alter its enzymatic activity, leading to changes in signaling cascades in cancers. After three years of work, Huang and his colleagues determined the atomic structure of a PI3Kα complex. This knowledge not only allows researchers to understand the effects of the mutations but also opens the door for the development of mutant-specific inhibitors.

This work also won Huang the Mette Strand Research Award in 2008, given yearly to one of the brightest young investigators at The John's Hopkins University.

"As already demonstrated in his thesis work, Chuan-Hsiang has the essential qualities of a successful scientist: he thinks deeply, logically, and analytically; he perseveres and possesses great experimental skills; and he reads the literature widely and critically," Amzel said. "These attributes not only explain his past successes but foretell his potential to great scientific accomplishments in the future."

The Baumert award was presented at the 2009 Joint NSLS and CFN Users' Meeting on May 19. Huang received a $500 honorarium and travel arrangements to the Users' Meeting, where he gave a 15-minute presentation on his thesis work.