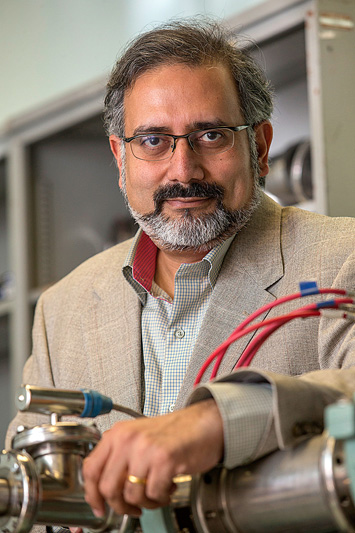 Abhay Deshpande, a professor of experimental nuclear physics at Stony Brook University, has been named Director of Electron Ion Collider Science at Brookhaven National Laboratory. Deshpande has conducted quantum chromodynamics research at CERN—the European Center for Nuclear Research—and at DESY, a national research center in Germany and was a Fellow at the RIKEN BNL Research Center at Brookhaven Lab.

The Electron-Ion Collider (EIC) is a proposed new powerful particle collider that would create rapid-fire, high-resolution “snapshots” of the quarks and gluons that make up the protons and neutrons in an atom’s nucleus. In 2015, the DOE and the National Science Foundation’s Nuclear Science Advisory Committee recommended an EIC as the highest priority for new facility construction in the field of nuclear science. The location of the proposed EIC has not yet been determined.

In his new role as Director of EIC Science at Brookhaven, Deshpande will help develop a strong scientific case for the EIC. He will also work with scientists from Brookhaven, SBU, and around the world to develop the EIC experimental program and guide EIC detector R&D to address the most important science opportunities enabled by an EIC.

As EIC Science Director at Brookhaven, Deshpande will collaborate with other Laboratory leaders to represent the compelling scientific opportunities of a U.S.-based EIC to the scientific community and other stakeholders, and lead the scientific outreach efforts for Brookhaven Lab.

“In this role, I intend to explore innovations and new research topics for the EIC, and move the best of those ideas into development,” said Deshpande.

One of Deshpande’s key goals is to involve more scientists in EIC-related activities by strengthening and making new connections with physicists in the heavy ion physics community. He also plans to launch a broad campaign to increase international involvement in the project. At the heart of this effort is a strong partnership between SBU and Brookhaven. Deshpande will bring together nuclear scientists from SBU and researchers from Brookhaven’s Nuclear and Particle Physics Directorate, inspiring collaborative research projects between the two institutions and scientists from around the world. “My hope is that within a short time, the students at Stony Brook will have more opportunities to work with researchers at Brookhaven, and vice-versa,” Deshpande said.

In addition to his role as EIC science Director, Deshpande will also serve as Director of the newly created SBU/Brookhaven Center for Frontiers in Nuclear Science. Many of the Center’s research projects will be focused on advancing science and technology that would support an EIC, enabling scientists to explore the still mysterious structures and interactions of quarks and gluons. This research will open up a new frontier in nuclear physics and answer fundamental questions about visible matter and the workings of our universe.

“Overall, I want the worldwide community of EIC enthusiasts to see the Center for Frontiers in Nuclear Science as their ‘home away from home,’ where they can come and work on EIC-related research,” Deshpande said.

“The Center’s activities will be closely coordinated with the interests of both groups and also involve other EIC enthusiasts ,” Deshpande said. “We will lead discussions, and encourage proposals for workshops and visitor, post-doctoral fellows, and student support,” Deshpande said.

All the while, through educational programs such as annual summer schools and topical lectures at the Center and the Lab, Deshpande hopes to help grow the group of young scientists who will become the future leaders of EIC science.

Deshpande earned a Ph.D. in experimental high-energy physics from Yale University. He completed his undergraduate education at the Indian Institute of Technology, Kanpur—a premier center for physics education. After completing his graduate studies, Deshpande conducted quantum chromodynamics research at CERN—the European Center for Nuclear Research—and at DESY, a national research center in Germany, and was a Fellow at the RIKEN BNL Research Center at Brookhaven Lab.