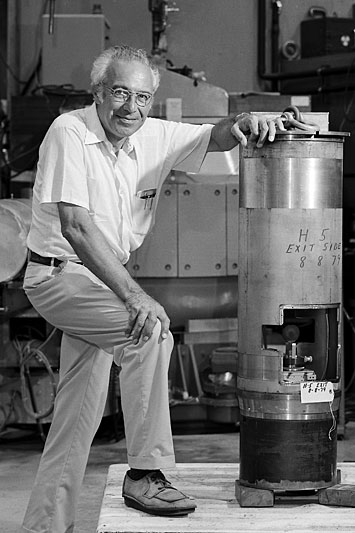 Julius Hastings in front of the H-5 Triple Axis Spectrometer at the High Flux Beam Reactor in 1979.

Julius Hastings, who joined Brookhaven National Laboratory in 1947 soon after it opened, died March 30. He was 96.

Hastings came to Brookhaven with a Ph.D. in chemistry from Cornell University and experience as a chemist at Monsanto Chemical Company. He was the first Ph.D. hired in the Lab’s Chemistry Department, and he rose to become a senior chemist in 1960.

Hastings retired in 1987, yet maintained his full work schedule even after the closing of the High Flux Beam Reactor in 1999. In April 2011, he was named senior chemist emeritus for his distinguished contributions to the Laboratory, particularly in the area of neutron scattering research.

When Hastings arrived at Brookhaven in 1947 he was interested in studying the magnetic structure of materials using neutron scattering, but operations at the Brookhaven Graphite Research Reactor (BGRR) to produce for experiments would not begin until 1950. Until then, he worked on mass spectrometry experiments, including one, suggested by former Laboratory Director Maurice Goldhaber, which determined the age of the elements.

After the BGRR began operations, Hastings began using neutron beams at the facility to study magnetism. In 1959, Hastings and his lifelong Brookhaven collaborator Lester Corliss, along with Richard Weiss, studied the atomic structure of chromium. In that experiment, they were the first to observe a modulated magnetic structure, an unusual phenomenon in which magnetic moments form spirals throughout the material. The magnetic moment of the chromium atom arises from the spin of its unpaired electrons. The unusual structure of chromium is still a subject of intense study today.

By 1956, the Lab determined a new reactor was needed for certain experiments that required greater neutron intensity. Hastings was among the scientists who entered discussions on the type of reactor that would be built. He was one of five co-holders of the patent for design of the High Flux Beam Reactor (HFBR), Brookhaven’s world-class research reactor that began operations in 1965.

Hastings and Corliss performed experiments at the HFBR to study magnetic materials until the reactor closed. They were especially interested in the mechanisms of magnetic systems as they change from a disordered to an ordered state. Of particular importance was Hastings’ experiment in which he measured the critical exponents—the behavior of physical qualities near phase transitions of rubidium manganese fluoride, an antiferromagnet.

In addition to his significant impact on neutron-scattering research, Hastings made an important contribution to the Laboratory and future scientists through mentoring. He trained numerous young scientists in neutron scattering, and many of them became leaders in the field. They included the late Walter Hamilton, who was a well-known crystallographer in the Chemistry Department, and the late Robert Nathans, who had a distinguished career studying magnetism in the Physics Department.

Among his mentees was also his son, Jerome, who was himself a scientist at Brookhaven.

“Not only did he mentor his post-docs but most importantly he was a mentor to me during my almost 25 years at BNL,” Jerome said.

Hastings is survived by three sons: Harold, of Sheffield, Massachusetts; Jerome, of Stanford, California; and Alan, of Davis, California.