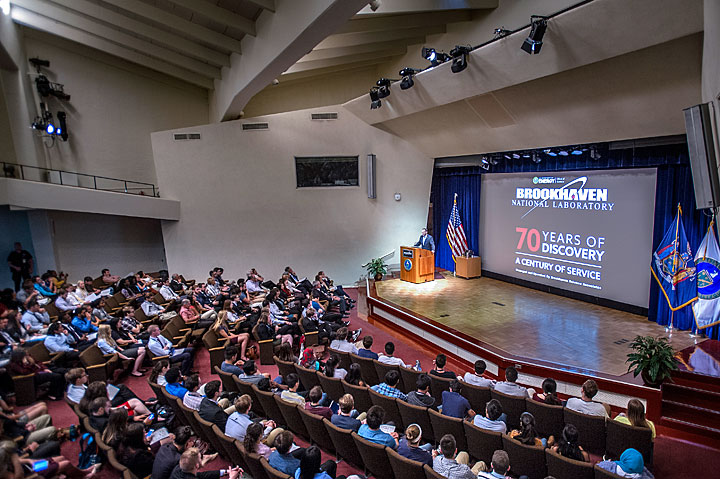 Each year, Brookhaven’s Office of Educational Programs (OEP) offers hundreds of college and pre-college students the opportunity to conduct cutting-edge research alongside scientists who are experts in their fields. Many of the students’ research projects involve experiments at DOE Office of Science User Facilities at Brookhaven like the Relativistic Heavy Ion Collider, the National Synchrotron Light Source II, and the Center for Functional Nanomaterials.

After 10 dedicated weeks of studying, experimenting, and calculating, this year’s interns began their final day at Brookhaven listening to oral presentations from their peers. A select group of interns from each department at Brookhaven was chosen to give these presentations to scientists in their field of study, as well as their mentors and fellow interns. Topics ranged from studies on cosmic radiation to the diversity of bumblebees. 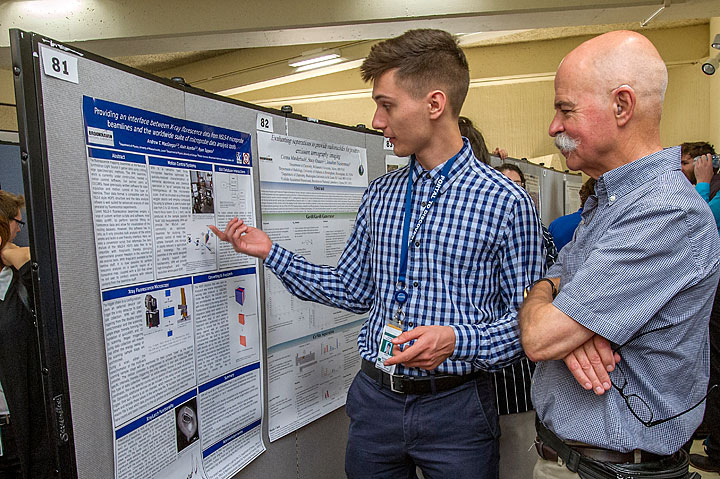 A summer intern at Brookhaven Lab discusses the research he conducted at the National Synchrotron Light Source II, the nation's brightest synchrotron.

Following the oral presentations, all of the Brookhaven interns assembled in the lobby of Berkner Hall for a grand poster session. The event was bustling as the students discussed their summer research projects with employees from all areas of the Laboratory. The poster session offered the interns a chance to communicate their complex science research in a professional setting to both scientists and laypersons, an important skill for future scientists. It was evident from their discussions that, in only a few months, the students became experts in their areas of research, and are well on the road to becoming the next generation of leaders in STEM.

Leadership, indeed, was the overarching theme of the closing ceremony, featuring keynote speaker Lenora Peters Grant, a Senior Executive Advisor/Senior Intelligence Strategist at the Office of the Director of National Intelligence. Throughout her talk, Grant focused on the core characteristics that are essential to leadership: caring and flexibility, good communication skills, upstanding character, competence, and courage.

“You are America’s best and brightest and I want you to know that,” she began. “You are the future. If you were to add five, ten, or twenty years to your age, you will be running this lab or another national lab. You are leaders.” 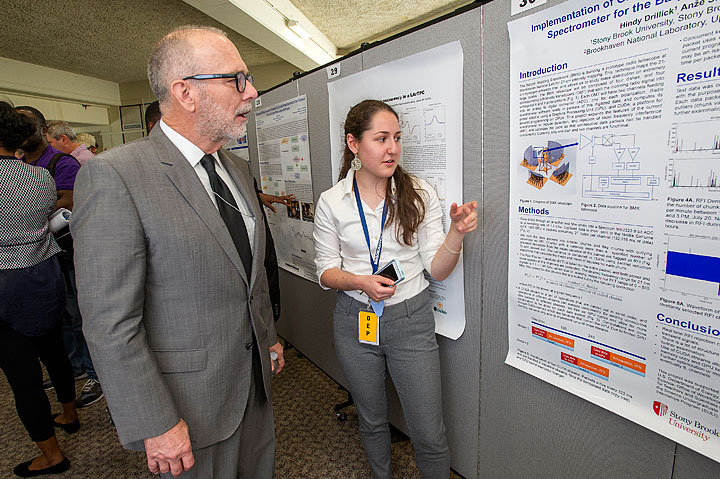 The summer interns had the opportunity to discuss their research with scientists and members of the Department of Energy during a poster session, held on their final day at Brookhaven.

Grant also spoke about the honor of public service and the impact of STEM innovations on society.

“When you think about 100 years from this day, what will matter is what you’ve done to help and advance other people. It won’t matter what kind of car you drove. It won’t matter what kind of house you lived in.  It won’t matter how much money was in your bank account,” Grant said. “What will matter, 100 years from this day, is that the world might be a little better because of you. You made a worthwhile contribution in your community and to the global society in which we all live. Your legacy will live on in the lives of others.”

The interns were also addressed by Lee Zeldin, the U.S. Representative for Brookhaven’s congressional district.

“What makes our country the greatest country in the world is right here in special places like Brookhaven Lab,” Zeldin said. “There may be a future Nobel prize winner here in this room. It’s the greatest privilege to be asked to greet you and congratulate you, knowing that you’re going to be discovering the amazing advances that lay ahead.” 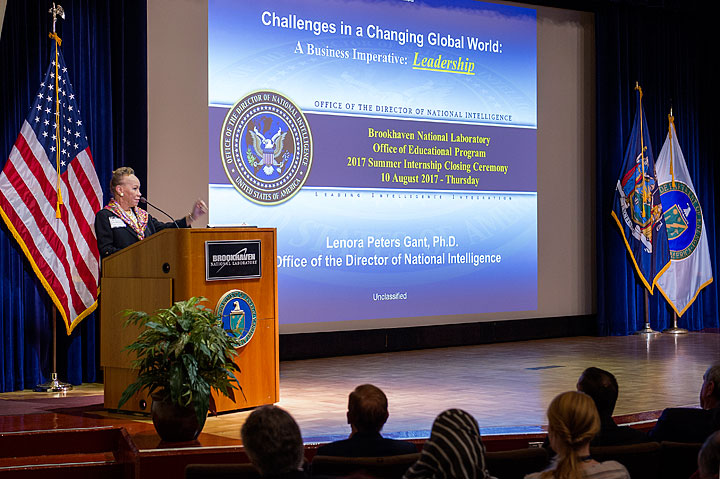 Keynote speaker Lenora Peters Grant focused her talk on the meaning of leadership, and the bright future ahead for Brookhaven's interns.

“There’s really no other form of research that emulates what we do at the national labs. We seek to understand the forces of nature and the particles that form all of us, because that’s what going to lead the next generation—your generation—to new technologies and new innovations,” Tribble said. “Our scientific community needs all of you. You are among the brightest in the pool of national talent.”

OEP manager Kenneth White ended the ceremony on a supportive note, discussing the challenges that come with pursuing a career in science research but also the sense of reward that career path instills. He thanked the interns for spending their summer at Brookhaven and noted, "I hope you enjoyed your time here, and we look forward to seeing you here again.”

The summer internships offered by the Office of Educational Programs are primarily funded by DOE’s Office of Science, other DOE offices, Brookhaven Science Associates, the National Science Foundation, and other federal and non-federal agencies.