BNLers' Adventures for the Solar Eclipse

This was the United States' first coast-to-coast total solar eclipse since 1918—the same year Irving Berlin wrote "God Bless America" on the Lab site, when it was the U.S. Army's Camp Upton—wrote Phil Harrington in a Monday Memo article he coauthored about the eclipse and how to view it safely. Harrington, of the Human Resources Directorate, is also an astronomy professor at Suffolk County Community College, writes a monthly column for Astronomy Magazine, and has authored nine books on astronomy. He watched the eclipse from Tennessee, where he captured the photographs above, noting, "This eclipse was outstanding!"

Harrington wasn't the only BNLer to enjoy this cosmic performance—from on site or across state lines. Read about some of their adventures, and see how they photographed them, below. 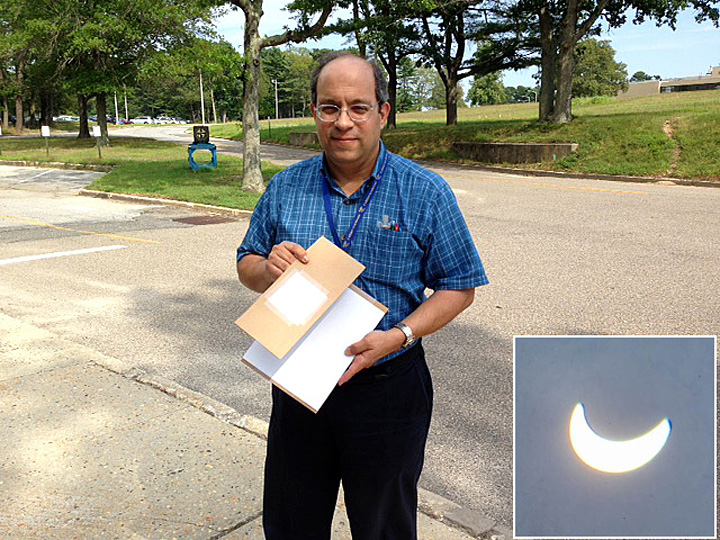 Sal Picataggio (above) is a senior mechanical design engineer in the Collider-Accelerator Department. He watched the eclipse from outside Bldg. 911 using a homemade pinhole projector. 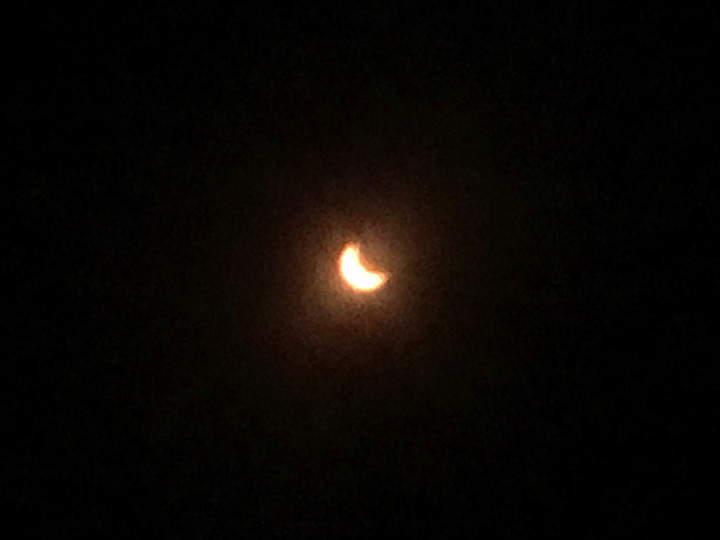 Christina Swinson, a physicist in the Collider-Accelerator Department, took the photo shown above while attending an international physics conference on particle beam instrumentation in Grand Rapids, Michigan.

In nearby Manorville, Rick Jackimowicz of the Structural Biology Group at the National Synchrotron Light Source II (NSLS-II) took a photo every 10 minutes from 1:20 to 4:15 p.m. He used a digital camera, 600-millimeter lens, and solar filter, which is similar to the eclipse glasses that are dark enough to briefly look at the sun safely. With photo editing software, he then compiled his shots into the montage above.

Babak Andi, also of the Structural Biology Group at NSLS-II, took the shots above from nearby Yaphank with a solar telescope and smartphone. 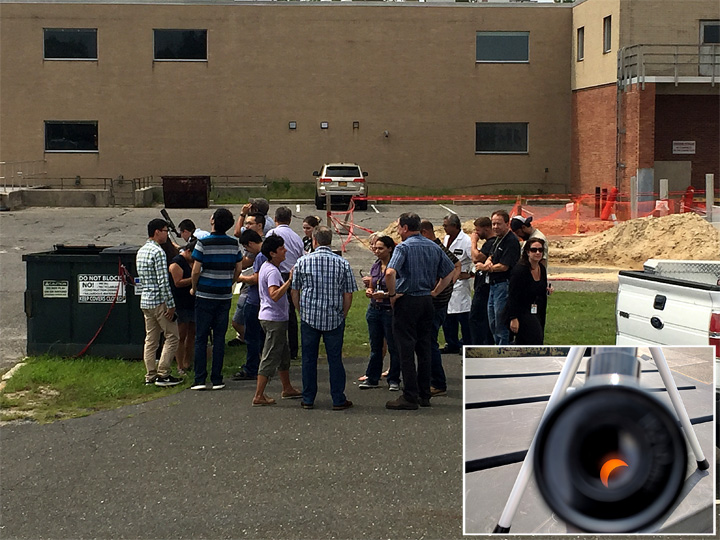 George Canellis and Gabe Lopez are desk-side administrators in the Information Technology Division. They and a group of BNLers watched the eclipse from outside the ITD Help Desk in Bldg. 129, using eclipse glasses and Lopez's solar telescope. 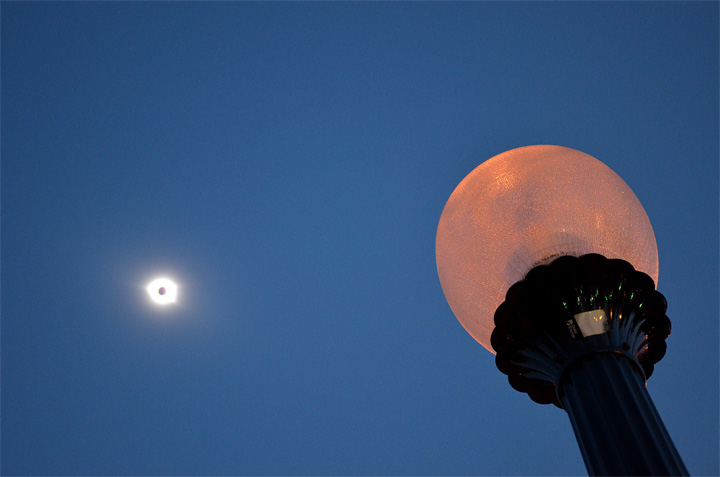 Susan Frank of the Lab's Office of Educational Programs traveled to Greenville, South Carolina, with her husband, who took the photo above during totality. As a science educator, she spent the week before the eclipse facilitating the summer middle school program on astrophysics. "We were plotting sun spots with students and, of course, discussing the total eclipse," she said. "Greenville was in the path of totality, and only…a 14-hour drive." 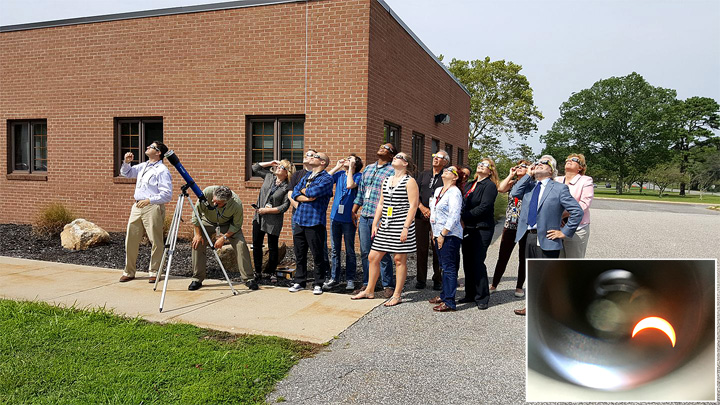 Matt Kershis (above, fourth from left) is a postdoc in the Chemistry Division. He viewed the eclipse through a home-built pinhole projector before he and his colleagues walked to the Office of Educational Programs in Bldg. 438, where BNLers set up a telescope with a solar filter. He took his photo of the eclipse (inset) with his iPhone looking through the telescope.

Justine Haupt of the Instrumentation Division is helping develop the digital camera sensor for the Large Synoptic Survey Telescope. She watched the eclipse with hundreds of guests at the Custer Observatory in Southold, a observatory that offers the public free "tours" of the sky and stars on Saturday evenings (weather permitting). Haupt is a director for the Custer Institute. 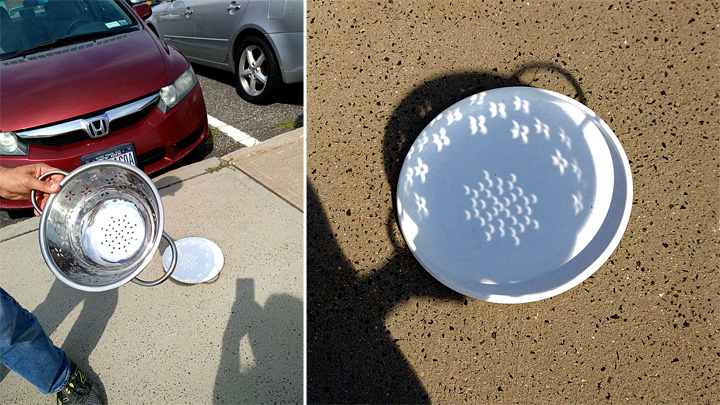 Ofer Rind of the Physics Department created "little eclipses" on site using a colander as a pinhole projector. "It's funny how many people asked me if I always carry around a colander in my car," Rind said. "Of course, my response was, 'Hey, you never know when you'll need to drain some pasta.'"

Percy Zahl, a scientist at the Center for Functional Nanomaterials, watched the total solar eclipse from Cherohala Skyway, a national scenic byway that crosses through the Cherokee National Forest in Tennessee over to the Nantahala National Forest in North Carolina. Check out the time-lapse video (above) he created by compiling pictures from his camera. He documented his trip and posted other photos here. 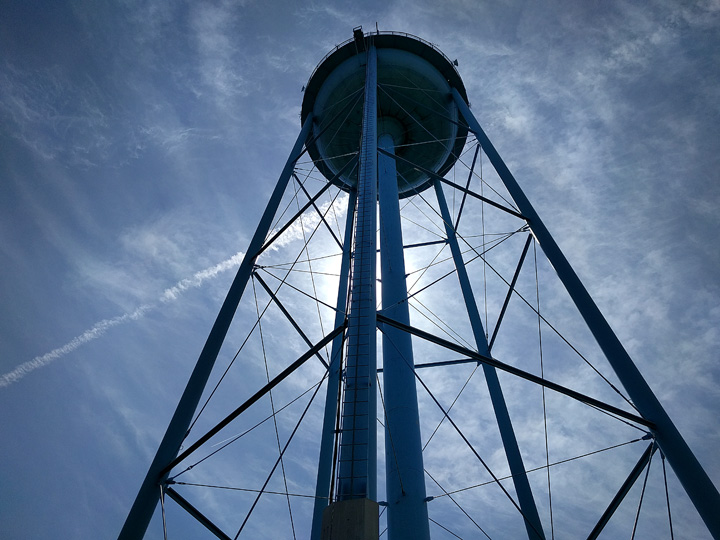 Cara Laasch of NSLS-II and the Media & Communications Office flew to Chicago, where she met up with her husband, who is a physicist at Fermilab. Together they drove to a dirt road in Missouri, where they saw totality with fellow travelers from Texas, Illinois, Missouri, and Wisconsin. The water tower in Laasch's photo above is located directly along the centerline of totality. 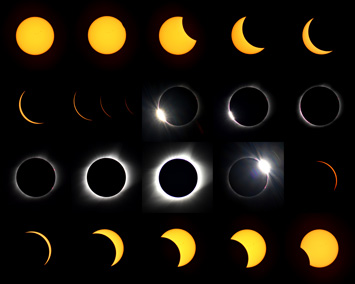 Larry Carr, also of NSLS-II, had four hotel rooms booked from Lincoln, Nebraska, to Franklin, North Carolina, along the path of totality. The day before the eclipse, while visiting his daughter and her son for their birthdays in Ohio, Carr checked weather forecasts to determine where the clouds during the eclipse were least likely. He canceled three reservations and hit the road for Tennessee, capturing the photos collected in the montage above while stationed at a rest area on Interstate 40 near Buffalo Valley, Tennessee, about 55 miles east of Nashville and a few hundred yards from the eclipse centerline.