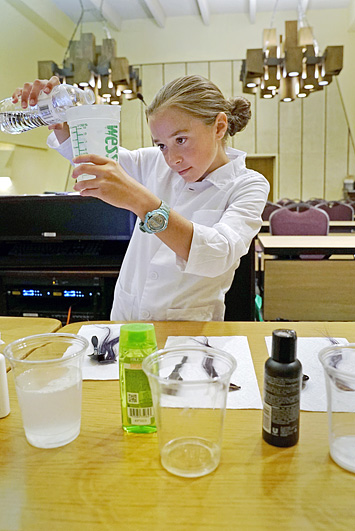 BERA camper and science fair participant Jenna Mehlinger, daughter of Janine Mehlinger in the Business Services Directorate, prepares her experiment for the fair.

Brookhaven staff are ensuring science is alive and well with the next generation. The second annual Brookhaven Employee Recreation Association (BERA) Summer Camp Science Fair, sponsored by Brookhaven Women in Science (BWIS), was held Aug. 17, in Berkner Hall. The goal of the fair is to increase participants’ interest in science, technology, engineering, and math (STEM), as well as help them develop speaking skills and independent work skills.

“It was thrilling to see the kids excited to explain their science project in front of an audience at such a young age,” said Firoza Zanoni, Safety & Health Services Division Field Services Group Manager and organizer of this year’s fair. “I was impressed with their confidence.”

Girls and boys from five to 11 years old submitted science projects on a wide variety of topics such as a “Do-it-Yourself Compass,” “Radiation in Our Daily Lives,” and “How Newspapers Portray the Presidential Candidates.”

Participants answered questions about their projects, which followed the scientific method, in front of an audience. They also each received a certificate and prize. The participants then enjoyed a luncheon with their parents and BWIS members.

If you have questions about the BERA Summer Camp Science Fair, contact Firoza Zanoni at Ext. 4532. To learn more about BWIS, visit www.bnl.gov/bwis.