The following news release was issued by the Interactions Collaboration, an international community of particle physics communication specialists, in celebration of Dark Matter Day, a globally recognized celebration of this cosmic riddle. Dark Matter Day is being recognized around the globe on Tuesday, Oct. 31, 2017, as a day of intrigue and inquiry into the true nature of dark matter. Local events will feature science experts, activities, and film presentations.

Today the world is celebrating the hunt for the universe’s most elusive matter in a series of “Dark Matter Day” events planned in over a dozen countries.

The events, planned on and around the formally recognized day on October 31, 2017, will engage the public in discussions about dark matter, which together with dark energy makes up about 95 percent of the mass and energy in our universe. Though we know through its gravitational effects that dark matter greatly dwarfs the visible matter in our universe, we know little about it.

How can I get involved?

Universities, institutions, science centers and individuals have already announced Dark Matter Day-themed events in Austria, Brazil, Canada, Chile, Colombia, Germany, Italy, Mexico, Peru, Spain, Sweden, Switzerland, and in the U.K. and U.S., with more events on the way. There are also several online events planned if you can’t be there in person.

What is dark matter? 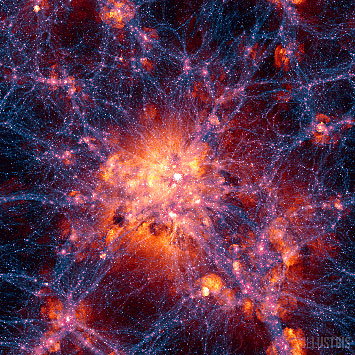 Dark matter explains how galaxies spin at a faster-than-expected rate without coming apart. Scientists know from these and other space observations that there is “missing” mass—something we can’t see—that makes up an estimated 95 percent of the total mass and energy of the universe. So a big part of the universe is largely unknown to us.

Finding out what dark matter is made of is a pressing pursuit in physics. We don’t yet know if it’s composed of undiscovered particles or whether it requires some other change in our understanding of the universe’s laws of physics. A host of innovative experiments are searching for the source of dark matter using different types of tools, such as mile-deep detectors, powerful particle beams, and space-based and ground-based telescopes.

Why is there a day dedicated to dark matter?

Revealing dark matter’s true nature will tell us a lot about the origins, evolution and overall structure in the universe, and will reshape our understanding of physics.

Dark Matter Day events are intended to educate the public about the importance of learning all we can about dark matter to develop a fuller picture of the unseen universe. Focusing more brainpower and scientific resources on dark matter’s mysteries could lead to new ideas and new discoveries.

Who is behind Dark Matter Day?

This first-ever Dark Matter Day campaign was conceived by the Interactions Collaboration, a group of science communicators representing the world’s particle physics laboratories. The collaboration also runs the www.darkmatterday.com website as a resource for people who want to host or attend local Dark Matter Day events.

Members of the Interactions Collaboration want you to be a part of Dark Matter Day. Please send an email to darkmatterday@interactions.org with any questions, comments, or suggestions.

For a press contact in your region visit: http://www.darkmatterday.com/contacts

The Interactions Collaboration (Interactions.org) seeks to support the international science of particle physics and to set visible footprints for peaceful collaboration across all borders. The www.darkmatter.com website was developed and is jointly maintained by the Interactions Collaboration, whose members represent the world's particle physics laboratories and institutions in Europe, North America, Asia, and Australia, with funding provided by science funding agencies from many nations.