Shipboard instruments will collect crucial climate data during a series of routine voyages between Australia and Antarctica. 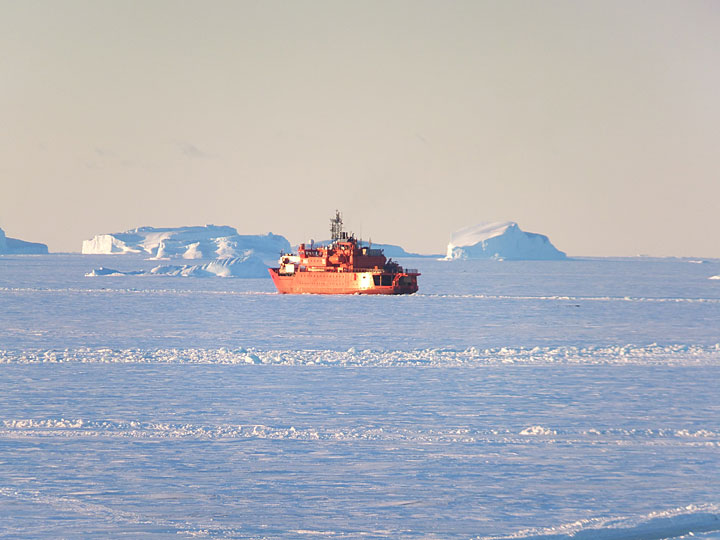 Imagine spending several weeks aboard a ship traversing the stormiest ocean on Earth, climbing each day to the highest deck to check on scientific instruments mounted inside a windowless, 20-foot shipping container. As you steady yourself against the rolling seas by wedging your body between instrument racks, you might wonder why you’re not sitting poolside on a tropical cruise instead. But after just a four-day taste of such a grueling journey, Janek Uin, an atmospheric scientist at the U.S. Department of Energy’s (DOE) Brookhaven National Laboratory, said he loved it.

“Some people were green in the face and didn’t like the experience, but I was fine,” he said.

We need to understand how aerosols are formed, how they behave, how they move, and how they produce clouds in different environments.

Uin was one of 12 scientists, technicians, and “instrument mentors” aboard the Aurora Australis during a test run for a DOE Atmospheric Radiation Measurement (ARM) Climate Research Facility mission now underway to study aerosol particles, cloud properties, and other atmospheric conditions over the Southern Ocean—the frigid body of water that circles Antarctica. From late October through next April, the Australian icebreaker will carry an array of instruments to collect air samples, humidity readings, and a wide range of other atmospheric data as it travels on routine research and supply-restocking voyages back and forth from Hobart, Australia, to four different research stations on and around the Antarctic coast. This set of instrumentation is known as the second ARM Mobile Facility (AMF2).

The data will help scientists better understand how aerosols—tiny particles suspended in the air—interact and grow and influence the formation of clouds in the relatively pristine and little-explored Antarctic environment.

“We want to get a better understanding about the aerosols because that’s one of the largest uncertainties in global climate models right now,” Uin said. 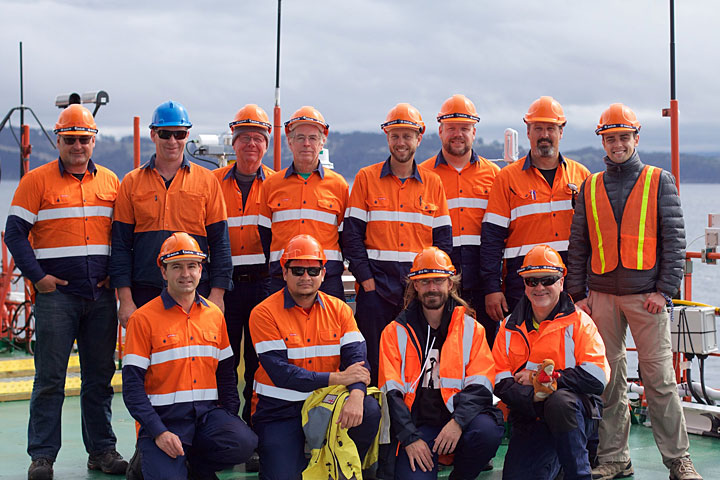 Aerosols can trigger cloud formation, reflect sunlight, absorb heat, and interact in other ways that influence how much of the sun’s energy reaches and heats up Earth’s atmosphere—or bounces back to space. And the aerosol particles present over the Southern Ocean—mostly from sea salt and biogenic sources—differ from those emitted by industrial processes in more populated parts of the world.

“We need to understand how aerosols are formed, how they behave, how they move, and how they produce clouds in different environments where different mechanisms are at work,” Uin said. “The more we know, the more we can say about what is going to happen with our climate.” 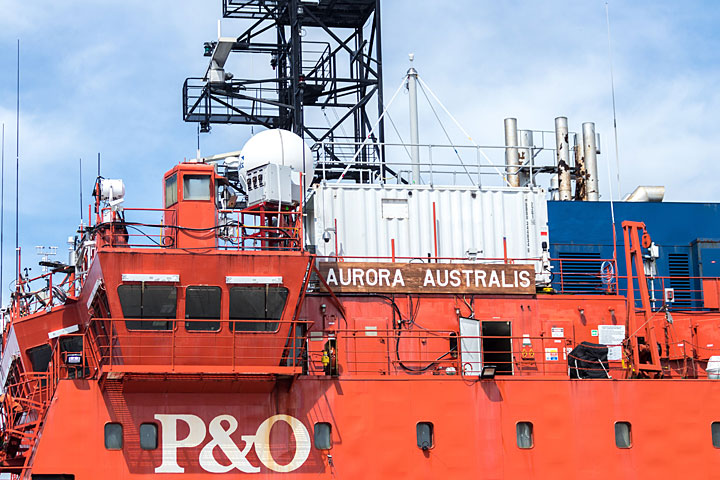 In the short term, Uin’s job is to ensure that the sampling instruments he’s responsible for are working and collecting quality data.

Those instruments are housed in an insulated SeaTainer shipping compartment known as the Aerosol Observing System (AOS), which was designed and built by Brookhaven scientists for the ARM Facility, a DOE Office of Science User Facility. The AOS and other similar portable sampling stations that make up the ARM Mobile Facility have been deployed at locations all over the world to generate data that’s freely available to climate researchers at universities and other labs.

“The instruments are difficult and the deployments are difficult—and these units have been everywhere from jungles to ice fields,” Uin said. “With every transit, that container goes through a lot of vibration, changes in humidity, and other conditions. All sorts of things can happen to the instruments. It’s not that things get broken, but there’s usually something—a loose wire. You have to know where to look to make sure everything is working for the next deployment.” 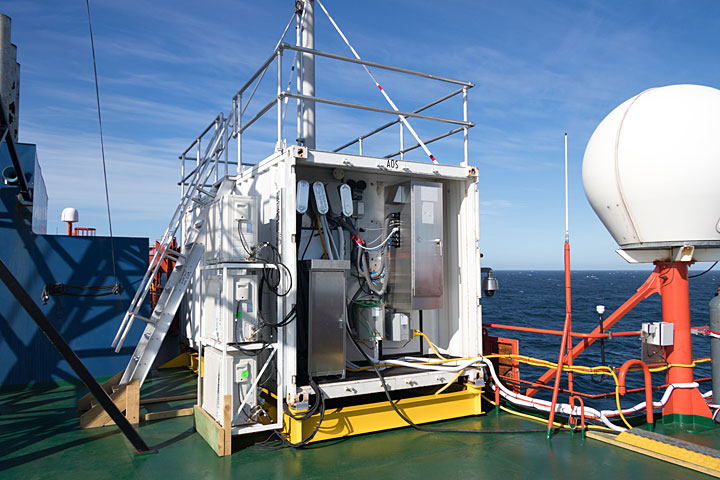 So even before the AOS set sail—or made it to Australia—Uin and the other AOS instrument mentors participated in a dry run organized by the AMF Site Management team at Los Alamos National Laboratory.

“We set everything up and the instruments were measuring like they would be, using the same kinds of power supplies that were going to be on the ship,” he said. “We practiced everything together with the technicians who were going to be on all the voyages so that once they are by themselves they know what to do.”

Then the technicians travelled to Australia with the AOS to install everything on the ship, and Uin met them there for the four-day test journey. 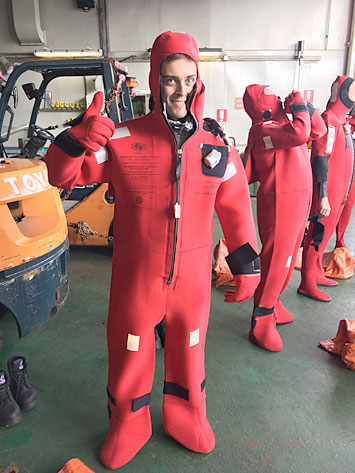 ARM instrument mentor Janek Uin, an atmospheric scientist at Brookhaven National Laboratory, in a survival suit aboard the Aurora Australis. Even on the test voyage, everyone had to conduct safety drills, suiting up and practicing getting into lifeboats. (Credit: Steele Griffiths)

“We spent a few days in port configuring everything, and then we sailed out to the continental shelf to test the instruments while the ship was rocking.”

Those tests turned out to be worthwhile.

“I’m responsible for five instruments that measure aerosol size distribution, how aerosol particles react to humidity, how much light they scatter—very fundamental aerosol properties. For certain studies, we use a ‘Humidified Tandem Differential Mobility Analyzer,’ a fancy name for a device that mixes the aerosol sample we collect with humid air and measures very precisely how much the particles grow in size. It has an internal water tank that’s automatically kept full by a simple sensor. But because the ship was rocking, that water kept sloshing all over the place and the sensor went crazy trying to refill the tank. I opened the instrument’s front door and saw water everywhere! That’s not good!”

A few minor modifications made the device more seaworthy before the actual research mission began.

“Everybody was really tired at the end of the test voyage because you spend your entire day steadying yourself,” Uin said. “You don’t even realize it, but your muscles are always working.”

As a result, he said, the three nights of sleep on the ship were among the best he’s ever had. “The cabins are low, so it rocks just a bit, and there’s the hum of the engines—I wish I could have that sleep at home!”

He also enjoyed being relatively unplugged from everyday communications.

“At first I was like, 'I need my entertainment, I’m going to go crazy, I’m going to get cabin fever!' But it was actually the best thing—four days without the Internet, no Facebook, no work email, nothing! They say you can always switch your phone off, but [back home] you can never switch your phone off. On the ship, you were forced to have hard downtime. It was great! I got to read a book, think my thoughts.” 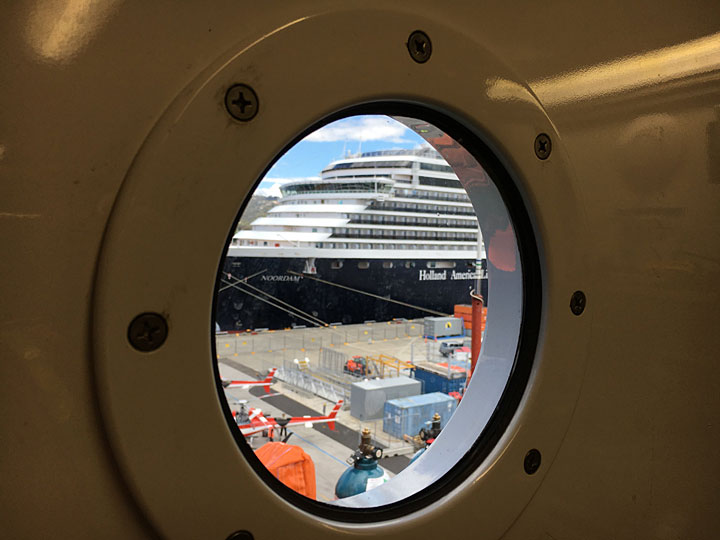 A view of a different kind of ocean-going vessel from a porthole aboard the Aurora Australis. (Credit: Janek Uin)

In late October, Uin returned to New York, leaving the AOS instruments ready to do science and in the capable hands of a rotating crew of technicians who will sail along on the sampling voyages. Each trip from Australia to Antarctica and back will last three to six weeks, with four voyages expected over the course of seven months. Technicians will cycle in and out on each trip, with some overlap for continuity.

“Our instruments are just going along for the ride, sampling as they go,” with the technicians keeping tabs on their operations. Uin will monitor data from his computer back at Brookhaven as it’s uploaded periodically, making note of anything that looks particularly interesting so he can follow up with more detailed analyses at a later date.

One tricky factor the technicians will have to be aware of is which way the wind is blowing, especially when the ship is standing still in port with the engines still running.

“When they see the ship’s exhaust coming from the stack toward the AOS, they have to switch all the sampling devices off and protect the instruments,” he said. In the best-case scenario, the heavy aerosol load coming from the stack could overwhelm the instruments, since they are designed to detect minute quantities. “Worst case, it could clog or ruin them,” Uin said.

But the sea remains the biggest challenge. 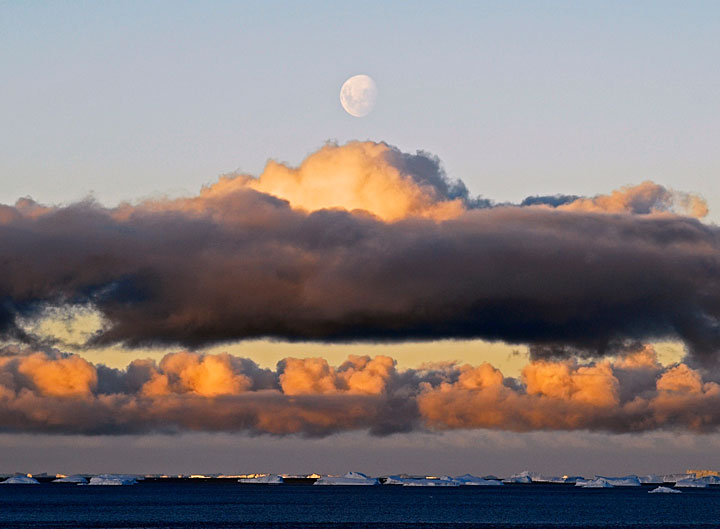 The data collected by the instruments aboard the Aurora Australis will help scientists better understand how aerosols—tiny particles suspended in the air—interact and grow and influence the formation of clouds in the relatively pristine and little-explored Antarctic environment. (Credit: Australian Antarctic Division)

“We were just on the continental shelf, and we thought that was rough seas. The technicians on the sampling voyages will see the full power of the Southern Ocean!”

The first sampling journey following Uin’s departure was actually delayed after the ship left Hobart. A low-pressure system off shore whipped up a storm with 55-mile-per-hour winds and 33-foot waves.

The Aurora Australis hunkered down among the islands close to the Australian shore waiting for the weather to clear. The ship eventually made it safely to Davis Station in Antarctica, and at the time of this writing, had completed the return trip to Hobart.

Still, Uin is worried about one of the technicians who will be on the third voyage.

“He doesn’t do boats really well. I’m hoping for the best, but I feel sorry for that guy.”

Brookhaven’s role in this ARM campaign is supported by the DOE Office of Science.