Despite Devastation, They—and Their Science—Go On

In the aftermath of Hurricane Maria, five students from the University of Puerto Rico continued their research at a national laboratory 1,600 miles to the north—thanks to Brookhaven Lab's Office of Educational Programs, mentors, and a scholarship fund created in honor of a late Brookhaven biologist 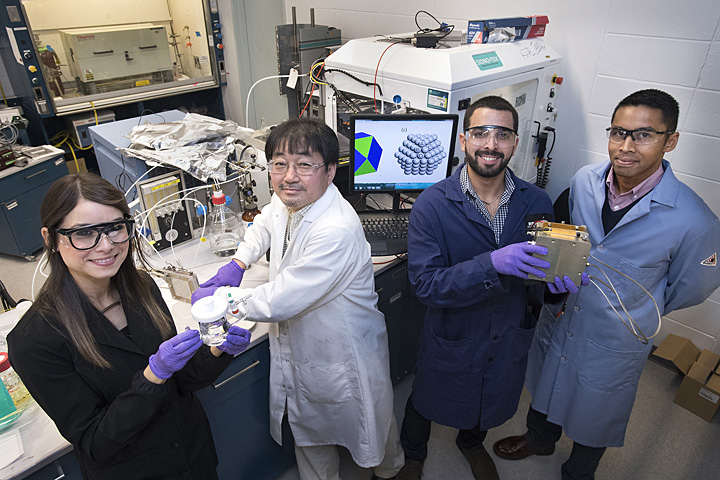 In the Lab's Chemistry Division are Melissa Vega Cartagena and Luis Betancourt De León (left and third from left, respectively) with mentors Kotaro Sasaki and Sanjaya Senanayake (second from left and right, respectively)

Hurricane Maria's first rains fell on Puerto Rico on Sept. 19, 2017. Fast-forward through less than two devastating days and the brutal hurricane unleashed more than 37 inches of rain, 155-mile-an-hour winds, surging tides and floods, and three tornadoes on the island. Lives were lost. Some homes were damaged, others destroyed. Entire towns once connected were now isolated, cut off from roads buried by landslides and bridges out—with widespread water shortages, cell phone outages, air and seaports closed, and the entire island without power.

As the hurricane tracked north and weakened, inhabitants of the U.S. commonwealth emerged, joining with local governments, the Federal Emergency Management Agency (FEMA), its federal partners, and others for recovery efforts that continue today. FEMA has described this as one of the nation's most logistically complex responses in history.

As those recovery efforts progressed, staff members at the U.S. Department of Energy's (DOE) Brookhaven National Laboratory began considering ways they could help.

Setting up to step up

Noel Blackburn of Brookhaven Lab's Office of Educational Programs explained, "Carlos Cabrera, a professor at the University of Puerto Rico, Río Piedras Campus, normally joins us for a monthly conference call with the INCREASE consortium, but that didn't happen after the storm. When we finally got through to Carlos and Professor Olga Mayol-Bracero at the university and heard about the devastation, we knew we had to step up and do something."

"INCREASE" stands for Interdisciplinary Consortium for Research and Educational Access in Science and Engineering. Formed at Brookhaven and based at Hampton University in Virginia, the consortium promotes research and education at minority-serving institutions, including the University of Puerto Rico. By welcoming member organizations' students to national user facilities like those at Brookhaven, INCREASE and its collaborating partners strive for more women and those from historically underrepresented groups to pursue careers in science and engineering.

"Carlos and Olga were able to communicate with us from a newly constructed building at the university that had been equipped with a generator," Blackburn said. "As we spoke, I asked about science students whose graduation plans would be in jeopardy if they couldn't do their research on the island. When we got their names, we lined up resources and mentors, and got the students here as quickly as possible."

In late October, five students left their families, friends, and homes behind, accepting an invitation to continue their scientific research at Brookhaven Lab on Long Island, 1,600 miles north. Luis Betancourt De León, Andrea Ramirez-Puentes, Fernanda Ramos-Garces, Joesene Soto Perez, and Melissa Vega Cartagena, arrived at Brookhaven to pursue their own research with scientists who stepped in as mentors: Sanjaya Senanayake and Kotaro Sasaki of the Lab's Chemistry Division, and Ernie Lewis and Art Sedlacek of the Environmental & Climate Sciences Department.

From airfare to housing on site at the Lab, the students' internships would be funded by scholarships created in honor of the late Virginia Pond, her 39-year-career as a biologist at Brookhaven, and her unceasing passion for education. 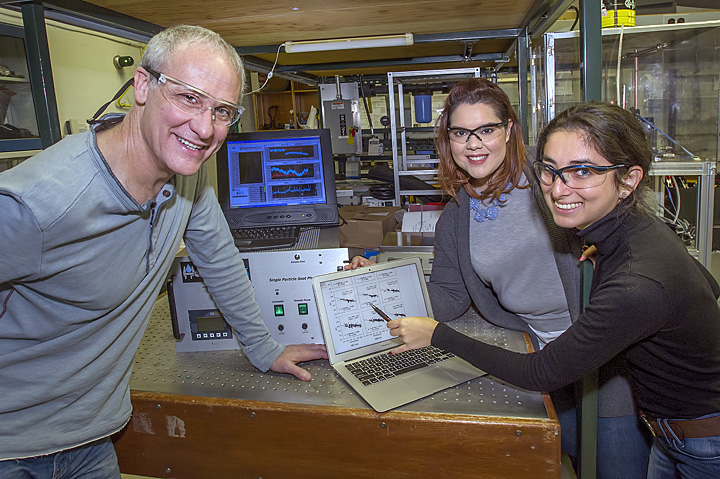 "Deciding to leave Puerto Rico in that condition was hard, but I feel like it was the right decision," Vega Cartagena said. "I talked with my husband and my parents, and they told me, 'This is your opportunity, go!'"

"Leaving my mom and my dad by themselves in Puerto Rico was a very hard decision, but I knew the opportunities at Brookhaven would surpass what I could have achieved if I didn't—including graduating on time this spring—and my parents encouraged me to go," said Betancourt, who has nearly completed his Ph.D. He recalled food shortages and waiting on line 12 hours to get gasoline in the days soon after Hurricane Maria hit. "My mom told me to take the opportunity and I know she's really proud I did." 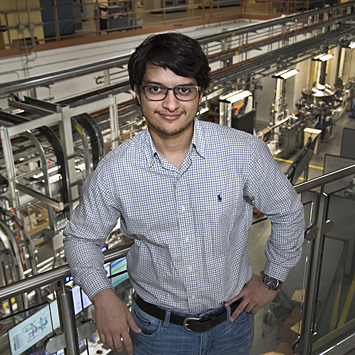 With guidance from mentors Senanayake and Sasaki of the Lab's Chemistry Division, Betancourt, Soto-Perez, and Vega Cartagena set out to analyze new materials for hydrogen fuel cells that produce electricity to power cars, trucks, building systems, and other useful applications.

Catalysts accelerate chemical reaction rates. For the chemical reactions in a fuel cell, platinum is efficient and used most often, but it's also very expensive. The students created three alternative fuel cell catalysts—combinations of silver and gold, silver and palladium, and silver and platinum—by depositing ultra-small nanoparticle arrangements using a "rotating disk slurry electrode technique" developed by scientists at the University of Puerto Rico. They also used techniques developed by Brookhaven scientists to deposit ultra-thin layers of one metal around another with atomic-scale precision.

At the state-of-the-art National Synchrotron Light Source II and labs in the Chemistry Division, the students studied their catalysts in situ, with techniques that provide step-by-step views of the chemical processes at the atomic level. NSLS-II is a DOE Office of Science User Facility at Brookhaven. Together, the students determined how nanoparticles affected catalysts' activity, stability, and performance for "oxygen-reduction" chemical reactions—the second of two critical processes in a hydrogen fuel cell, during which oxygen gains electrons and hydrogen ions, forming the fuel cell's only by-product: water!

Former Interns Continue Their Research as Facility Users at Brookhaven

Joesene Soto-Perez and Melissa Vega Cartagena completed their internships and headed back to Puerto Rico before the end of 2017. In February 2018, they rejoined Luis Betancourt at Brookhaven to continue their catalyst experiments—not as interns but as users at the National Synchrotron Light Source II.

Among their three samples, the students found the silver core enveloped by a thin layer of palladium nanoparticles was the most promising, allowing the most electrical current to pass through. This silver-palladium combination also performed similarly to catalysts composed of pure platinum, producing oxygen-reduction chemical reactions with about the same levels of activity.

Compared to platinum catalysts, the silver-palladium combination's lower cost is worth noting. Commodity prices fluctuate, but an ounce of platinum and palladium each cost about $1,000 per ounce. The amount of palladium needed when paired with silver is relatively small—a thin layer only a few atoms thick. And the silver costs about $16.50 per ounce, roughly 60 times less than platinum.

Soto-Perez and Vega Cartagena completed their internships and headed back to Puerto Rico before the end of 2017. In February 2018, they rejoined Betancourt at Brookhaven to continue their catalyst experiments—not as interns but as users at the NSLS-II.

Warmth of the sun—absorbed and reflected

Upon arriving in Brookhaven's Environmental & Climate Sciences Department, Andrea Ramirez-Puentes picked up where she left off just a few months earlier, when she was a Lab summer intern with the National Science Foundation’s Louis Stokes Alliance for Minority Participation program. This time—post-Hurricane Maria—graduate student Fernanda Ramos-Garces joined her.

"My family and I didn't have power for 40 days after the storm. It was crazy," Ramirez-Puentes said. "I saw this internship as a chance to get on with my research to finish my bachelor's degree. Everyone at the Lab has been so supportive and I am thankful how quickly things happened for us to come here, and how everyone made me feel like I was coming back home."

Ramirez-Puentes and Ramos-Garces each did their own projects, but both focused on helping determine to what extent tiny particles in Earth's atmosphere, called aerosols, contribute to climate. Aerosols can absorb and reflect energy that "pours down" from the sun and ricochets back up from Earth's surface. Some aerosols occur naturally, for example, from forest fires. Others are created from human activities, such as from burning fossil fuels.

With her mentor, Brookhaven scientist Ernie Lewis, Ramirez-Puentes analyzed aerosol-related data from the DOE-sponsored GoAmazon field campaign in Brazil. She compared aerosols' light absorption from data collected during wet and dry seasons, when different amounts of biomass burn in forest fires. Her research will help distinguish aerosols that originate from burning biomass with those produced in urban areas. This is a useful clue among many to improve the accuracy of computer "models" developed with mathematical formulas to simulate the complex processes that occur in Earth's atmosphere and provide scientists with insights to guide future research.

During Hurricane Maria, Ramos-Garces reviewed incoming reports from the National Weather Service while marooned at the local TV station in Puerto Rico where she worked at the time.

"Everyone we've met here cares about us as professionals and as people," Ramos-Garces said. "I have to say thank you to everyone here, for being part of our extended families and not letting our science stop."

Guided by her mentor Art Sedlacek, Ramos-Garces used statistics to analyze data collected from sampling stations across Puerto Rico. From her analysis, she identified significantly higher accumulations of carbon-based aerosols—including "black carbon," airborne leftovers from combustible fuels that did not completely burn off—in urban areas, compared to the island's remote regions. This finding is an important part in helping understand the extent human activity has on increasing levels of carbon aerosols in the atmosphere.

During their time at Brookhaven, the interns also found ways to enjoy themselves on and off site. Betancourt and Vega Cartagena celebrated Thanksgiving with Raul Acevedo-Esteves of NSLS-II, Aleida Perez of the Office of Educational Programs, and Perez's husband David Brown of the Lab’s Nuclear Science and Technology Department.

They—and their science—will go on

Hurricane Maria was one of three hurricanes that ravaged areas of the United States during the fall of 2017. In addition to welcoming these five students from the University of Puerto Rico, Brookhaven Lab staff, family members, and guests came together to help with recovery efforts in Texas, Florida, and Puerto Rico. At the “Big Bang Pop Festival” concert in October—organized for Lab staff and starring them too—they raised nearly $5,000 that was directed for hurricane relief through the United Way of Long Island. They also contributed 250 pounds of food, and hygiene and cleaning supplies that were distributed through the food bank Island Harvest.

Four have since returned to Puerto Rico and the university there. Soto Perez plans to finish a Ph.D. in chemistry in May 2022. Vega Cartagena is also working toward a Ph.D. in chemistry. She expects to earn hers in 2021. Ramirez-Puentes will graduate with a bachelor's degree this semester and plans to join the Peace Corps before pursuing a master's degree in environmental sciences. Ramos-Garces should complete her master's degree in environmental sciences in December 2018 and will then seek work as a weather forecaster.

Betancourt is still on site at Brookhaven, feeling about as calm as anyone could while preparing to defend a Ph.D. thesis. He will be ready to don his cap and gown in May before moving on as a postdoctoral researcher.

And for him, his fellow students—those who joined him at Brookhaven and those who stayed in Puerto Rico—as well as everyone rebuilding their lives and their island, here's to bluer skies ahead!