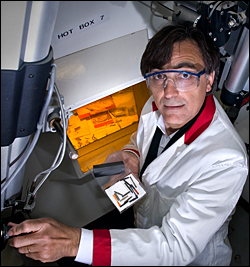 “What happens to conventional metals near the ocean?” you might ask the workers who are repairing the water tower at Jones Beach. They will tell you that both the tower’s steel framework and copper roof show extensive corrosion from the salty air.

To power future generations of cars, homes, utility plants, and even particle accelerators, unprecedented levels of efficiency will be needed. Such efficiency will require new unconventional alloys and composite materials that can also withstand high temperatures, intense radiation fluxes, high stresses, and other extreme conditions in highly corrosive environments that accelerate the aging and weakening of materials, as salty air weakens steel and copper.

On Wednesday, June 17, join Nikolaos Simos of Brookhaven’s Energy Sciences and Technology Department and the National Synchrotron Light Source II Project for the 452nd Brookhaven Lecture, titled “Extreme Environments of Next-Generation Energy Systems and Materials: Can They Peacefully Co-Exist?” All are invited to attend this free talk, which is open to the public and will be held in Berkner Hall at 4 p.m. Refreshments will be offered before and after the lecture. Visitors to the Lab ages 16 and older must carry a photo ID while on site.

During the lecture, Simos will discuss the demands of next-generation energy systems and focus on the extreme conditions that materials used in these systems will perform under. He will also explain Brookhaven Lab’s role in past, ongoing, and future experiments aimed to analyze and address materials’ abilities to endure these conditions.

Simos earned a Ph.D. in Mechanical Engineering from the City University of New York (CUNY) in 1988. In 1989, he began working at Brookhaven National Laboratory as a research engineer. He was promoted to associate scientist in 1990 and scientist in 1993. In addition to his work at Brookhaven Lab, Simos has worked as an adjunct professor at CUNY and Polytechnic University. He has also worked on projects for the International Atomic Energy Agency, Nuclear Regulatory Commission, and Department of Homeland Security.

To join Simos for dinner at an off-site restaurant after the lecture, contact Jean Frejka, frejka@ bnl.gov, Ext. 2349.