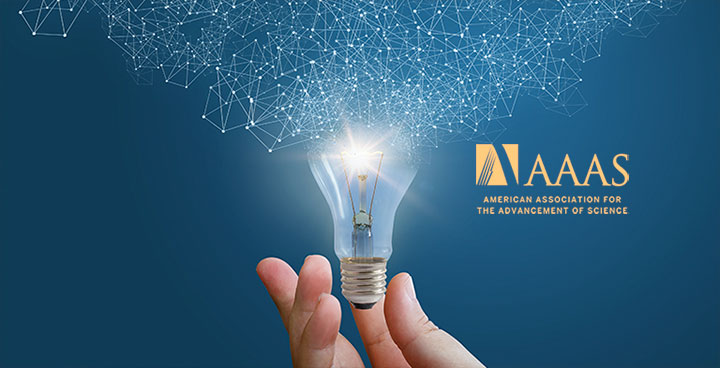 On Sunday, Feb. 18, scientists representing four U.S. Department of Energy (DOE) national laboratories came together to discuss the future of energy research at the American Association for the Advancement of Science (AAAS) Annual Meeting in Austin, Texas. Organized by DOE’s Brookhaven National Laboratory, the scientific session was titled, “Solving Materials Science Challenges to Shape Our Energy Future,” and focused on three key areas of research:

Esther Takeuchi, the William and Jane Knapp Chair in Energy and the Environment at Stony Brook University and a chief scientist in the Energy and Photon Sciences Directorate at Brookhaven Lab, opened the session with an overview and welcomed the large crowd of attendees. She addressed the growing need for widespread, locally available clean energy and acknowledged it as one of the biggest challenges of our time. Takeuchi discussed the National Labs’ mission to solve this critical challenge through the advancement of catalysis research, energy storage systems, and applications of quantum materials.

Jens Nørskov, the Leland T. Edwards Professor of Chemical Engineering at Stanford University and Professor of Photon Science at SLAC National Accelerator Laboratory, covered catalysis research as he led the first of three talks within the scientific session.

“We have energy,” he said. “The question is how do we turn that energy into useful forms and store it for later use?”

Catalysis is a promising field of research for converting existing energy on Earth into useful forms. Scientists are searching for a catalyst that could turn nitrogen, carbon dioxide, and water—thee abundant molecules in the atmosphere—into base chemicals for producing fuels or useful materials. While a few catalysts have been able to achieve this, none have been able to do so efficiency. Nørskov discussed the complications surrounding these catalysts, and gave some recent examples of completely new kinds of promising materials that scientists are investigating to identify more efficient catalysts. 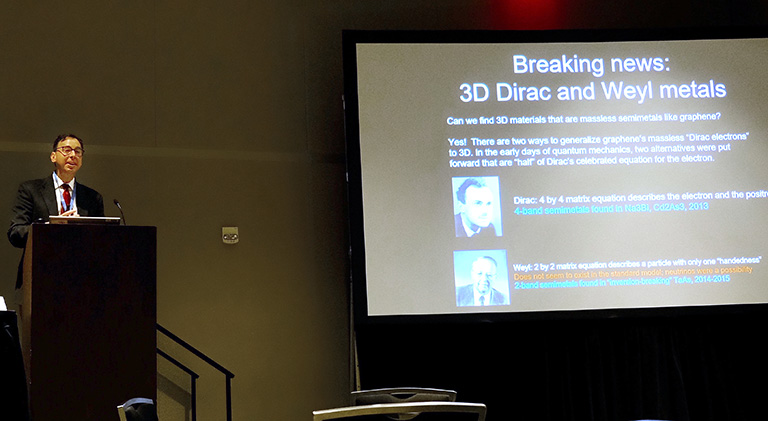 Joel Moore discusses quantum materials for novel energy and IT applications. His presentation was one of three scientific talks given during the symposium.

Following Nørskov’s talk, Takeuchi returned to the stage to lead a conversation on energy storage through battery systems. She discussed the critical and diverse needs for efficient batteries, including applications for portable electronics to implantable medical devices and large-scale storage systems for the electric grid. Takeuchi covered the chemical complexity of these battery structures, analyzed how each element contributes to improved or reduced battery function, and stressed the importance of tailoring batteries for the specific application in which they’re being used. Overall, she summarized the ongoing research efforts to close the gap between the usable output of battery systems and their theoretical content.

Joel Moore, the Chern-Simons Chair of Mathematical Physics at the University of California, Berkeley and physicist at Lawrence Berkeley National Laboratory, led the third scientific talk, which was focused on quantum materials. He discussed everything from superconductors—the “original” quantum materials—to new emergent particles that support novel properties scientists have not found in other areas of nature. Moore analyzed how each of these quantum materials could improve computing along with energy production, transmission, storage, and conversion.

After the three presentations, George Crabtree, Distinguished Fellow at Argonne National Laboratory, Distinguished Professor of Physics, Mechanical and Electrical Engineering at University of Illinois at Chicago, and Director of the Joint Center for Energy Storage Research, led an interactive discussion between the audience and the panelists. Crabtree and members of the audience, which included about 90 scientists, reporters, and students, asked the panelists insightful questions and continued to develop the conversation on the future of materials for energy production, storage, transmission, and use.