Narrowing in on the W Boson Mass 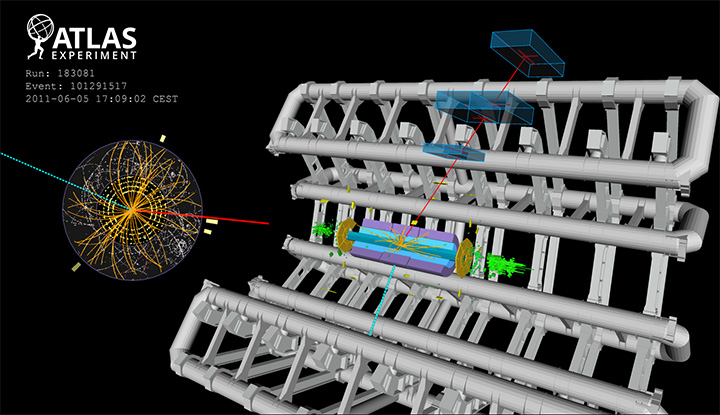 Display of a candidate event for a W boson decaying into one muon and one neutrino from proton-proton collisions recorded by ATLAS with LHC stable beams at a collision energy of 7 TeV. The event was recorded in June 2011 and was used for the measurement of the W boson mass. Credit: CERN

Scientists working on the ATLAS experiment at the Large Hadron Collider (LHC)—the world’s largest particle collider, hosted at CERN, the European particle physics laboratory—have precisely measured the mass of the W boson, a particle that plays a weighty role in a delicate balancing act of the quantum universe. This measurement is regarded as one of the most difficult in particle physics and the first of its kind for an LHC experiment. The new result is consistent with predictions and comparable to the precision of previous measurements made at the Tevatron collider at Fermilab.

“Achieving such a precise measurement despite the demanding conditions present in a hadron collider such as the LHC is a great challenge,” says the spokesperson of the ATLAS Collaboration, Karl Jakobs. “Reaching similar precision, as previously obtained at other colliders, with only one year of Run 1 data is remarkable. It is a prominent example of our ability to improve our knowledge of the Standard Model and look for signs of new physics through highly accurate measurements at the LHC.”

The U.S. Department of Energy’s (DOE) Brookhaven National Laboratory serves as the U.S. host laboratory for the 45 U.S. institutions working on the ATLAS experiment and houses a central computing hub for storing and analyzing data from the experiment and distributing it to ATLAS collaborators around the world. Brookhaven scientists have also been involved in the construction of the original detector as well as upgrades for coping with higher collision rates. They are also involved in physics analysis and ongoing project management and operations of the ATLAS detector.

The quantum universe is a delicate ecosystem in which particles and forces are intimately linked in a subatomic balancing act. Over the years, theorists have developed very precise predictions about each particle’s properties based on experimental measurements and the mathematical relationships outlined in the Standard Model—the world’s best field-guide to subatomic particles. For instance, the W boson is a massive particle and the carrier of the weak force, a subatomic superpower that enables quarks (the point-like particles found inside protons and neutrons) to switch their identities. This new measurement by the ATLAS experiment pegged the W boson mass as 80370±19 million electron volts (MeV), which is in the same ball park as the theoretical prediction, but not yet precise enough to see if theory lines-up exactly with experiment.

The W boson is a particularly interesting particle because it is one of the main ingredients in the scientific equation that predicts the mass of the Higgs boson, a particle unlike any other which could communicate with other undiscovered species.

“Prior to the Higgs discovery in 2012, we restricted its possible masses to a small window based on our measurements of the W boson and Top quark,” says Bodhitha Jayatilaka, a researcher at Fermilab who worked on the W boson measurement at the Tevatron. “By further confining the mass of the W boson, we can see if there are other ingredients which might be tipping the scales and secretly influencing the mass of the Higgs boson.”

The measurement is based on around 14 million W bosons recorded by ATLAS since 2011. It relies on a thorough calibration of the detector and of the theoretical modelling of W-boson production. Further analysis with the huge sample of now-available LHC data will allow even greater accuracy in the near future.

Brookhaven National Laboratory serves as the host lab for managing the U.S. ATLAS Operations Program and the high luminosity upgrade projects.  Brookhaven Lab’s contributions to ATLAS are funded by the DOE Office of Science.