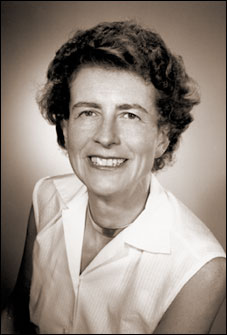 The BNL community is invited to attend the 2009 Gertrude Scharff-Goldhaber Prize ceremony, which will be held on Thursday, June 18, at 3 p.m. in the Hamilton Seminar Room, Bldg. 555.

Established to recognize substantial promise and accomplishment by a woman graduate student in physics, the annual $1,000 award is administered by Brookhaven Women in Science (BWIS). The prize honors the outstanding contributions of the late nuclear physicist Gertrude Scharff-Goldhaber, who, in 1950, became the first woman Ph.D. physicist appointed to the BNL staff. Later, Scharff-Goldhaber became a founding member of BWIS.

This year’s prize will be awarded to Na Li, a graduate student at Huazhong Normal University who is a member of the Relativistic Heavy Ion Collider’s (RHIC) STAR collaboration. Li will present a short seminar on her research, titled “Study of Collective Dynamics at RHIC.” Refreshments will follow the presentation.