Neutrinos are subtle subatomic particles that scientists believe play a key role in the evolution of our universe. They stream continuously from nuclear reactions in our Sun and other stars but pass through almost everything—even our bodies and Earth itself—without leaving a trace. Scientists who want to study these peculiar, lightweight particles must build extremely sensitive detectors.

A revolutionary new kind of neutrino detector, designed in part by scientists from the U.S. Department of Energy’s (DOE) Brookhaven National Laboratory, sits at the heart of the MicroBooNE experiment at DOE’s Fermi National Accelerator Laboratory (Fermilab). In two new papers, the MicroBooNE collaboration describes how they use this detector to pick up the telltale signs of neutrinos. The papers include details of the signal processing algorithms that are critical to accurately reconstruct neutrinos’ subtle interactions with atoms in the detector.

According to physicist Xin Qian, leader of Brookhaven Lab’s MicroBooNE physics group, “The work summarized in these papers, which include comparisons of recently collected experimental data with simulations of detector signals and noise, demonstrates an excellent understanding of MicroBooNE’s millimeter-resolution detector performance. This understanding provides a solid foundation for using this detector technology for precision physics measurements not just in MicroBooNE but also in future experiments, such as the Deep Underground Neutrino Experiment.”

The central piece of the MicroBooNE detector is a liquid-argon time projection chamber (LArTPC)—a bus-sized tank filled with argon (kept liquid at a biting -303 degrees Fahrenheit) and lined with electronics designed to operate in that extremely cold environment. This assembly acts like a powerful tomographic 3D digital camera to capture the trajectories of particles generated when neutrinos interact with argon atoms in the tank.

The neutrinos, which come in three “flavors” (electron, muon, and tau), originate from a proton accelerator at Fermilab. Mostly they sail on through the detector. But occasionally, a neutrino strikes an argon nucleus in the LArTPC. That interaction produces a number of other particles, some of which carry electric charge. As these charged particles zip through the tank, they ionize, or kick electrons off, other argon atoms in their path. The ousted electrons get caught in the powerful electric field surrounding the tank and drift toward an array of wires neatly arranged in three differently oriented planes at one end—the anode. Electronics inside the tank collect and amplify signals generated by electrons striking the wires and send those signals out to be recorded. By tracking the timing and locations of these signals, the detector can construct images of the electrons’ trajectories to reveal information about the energy and flavor of the neutrino that triggered each chain of events.

“Unfurling the ionization signal at the anode plane is analogous to processing photographic film in a dark room, except instead of chemical agents and solutions physicists apply signal-processing algorithms to reconstruct the picture of the neutrino interaction,” said Brooke Russell, a Yale University graduate student currently stationed at Brookhaven Lab.

But just as it’s important to get the chemistry right when processing film, neutrino-tracking scientists face challenges in developing their algorithms.

For one thing, the currents induced by drifting ionization electrons are generally small in magnitude and can be reduced further if the electrons arrive at the wires over a prolonged period of time. In addition, the “waveform” of current produced by one set of drifting electrons might be canceled out by that of another set of electrons arriving later—like ocean waves that get flattened out when the high crests of one wave line up with the low points of another. This makes it particularly difficult to discriminate the tiny signals from background “noise”—electronic distortions generated by excess charge stored on the wires used to carry the signals, the external power supplies that generate the detector’s electric field, or other sources. 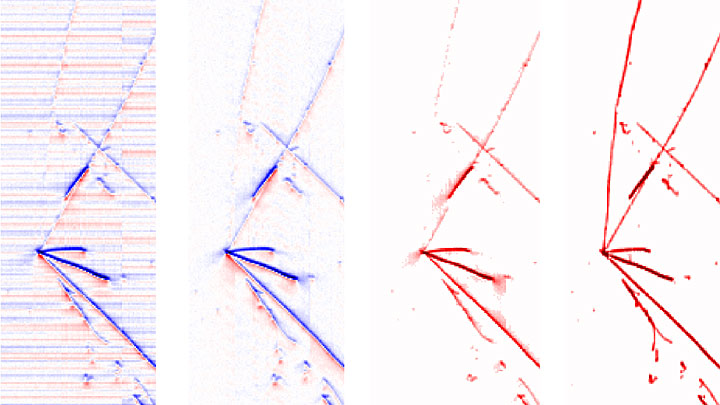 Two-dimensional images of a neutrino interaction in MicroBooNE shown at different stages of signal processing (left to right): the original data recorded by the detector with some excess noise (horizontal lines); the same data after removal of excess noise; the reconstructed distribution of ionization electrons after a signal processing technique called deconvolution was applied in one dimension; the reconstructed distribution of ionization electrons after the latest version of signal processing, which included 2D deconvolution, as described in the two just-published papers.

Keeping some of the electronics inside the liquid argon chamber helps to minimize noise by reducing the distance signals have to travel before being read out. As Brookhaven Lab postdoctoral research associate Brian Kirby noted, these low-noise “cold electronics,” designed by Brookhaven’s Instrumentation Division, are a crucial technology for large LArTPCs. “They simplify detector design and provide the electronic noise performance required to make a full use of induction wire plane signals,” he said.

To address this challenge, the MicroBooNE collaboration developed a novel algorithm to extract the distribution of electrons from the measured induced current on the wires. The foundation of the algorithm is a mathematical technique called deconvolution, which greatly simplified the “signal” by removing the very complex induction response of the liquid argon chamber, so scientists can extract the location and distribution of electrons arriving at the wire planes.

This deconvolution is performed in two dimensions (2D). According to Brookhaven postdoctoral research associate Hanyu Wei, the first ‘D’ is a common mathematical analysis of the waveform over time, and the second ‘D’ takes into account the long-range effect of the induction signals across multiple wires. By identifying specific “regions of interest” in the signal, the scientists can also mitigate the magnification of low-frequency noise from the deconvolution technique.

MicroBooNE is the first detector able to match the number of detected electrons across the three wire planes of a LArTPC.

“Since the same clusters of drifting electrons are detected by each of the wire planes, you’d expect to measure the same amount of charge from each plane,” said Michael Mooney, a former Brookhaven Lab postdoctoral research associate who is now a new faculty member at Colorado State University. But because of the complexity of the signals in the induction wire planes, no previous LArTPC detector has been able to do this.

“Our data-driven demonstration that local cross-plane matching of charge is feasible in a LArTPC opens doors to new types of reconstruction techniques that aim first to create a 3D image of the neutrino-argon interaction—and could greatly improve our ability to precisely determine the properties of the neutrino,” Mooney said.

The MicroBooNE team also developed significantly improved simulations of expected TPC signals and noise—taking into account the aforementioned long-range induction effect and the exact drifting electron’s position within a wire region—and used these new simulations to quantitatively evaluate their signal-processing algorithm. Comparing the simulations with results extracted from real data produced consistent results, which is a crucial step toward using the detector for physics studies.

“The consistency between the new simulation and the data gives us confidence that we understand our detector at the fundamental level, which is critical for upcoming physics analyses in MicroBooNE,” said Brookhaven Lab physicist Chao Zhang. 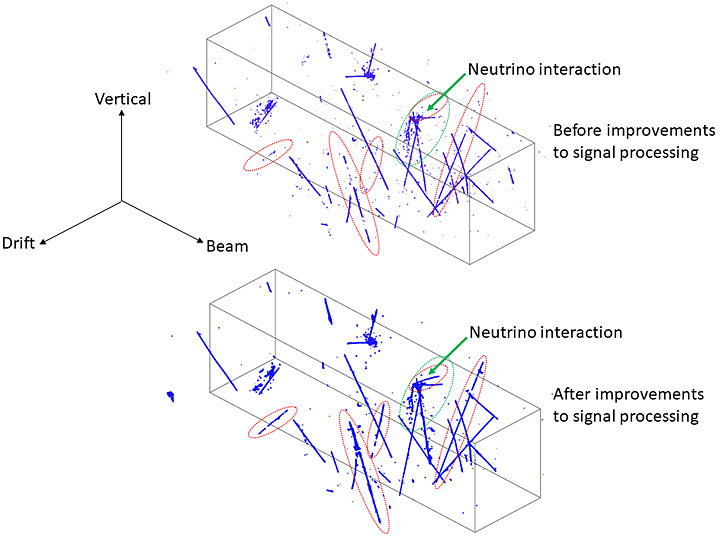 The latest improvements in MicroBooNE Time Projection Chamber (TPC) signal processing result in more completely reconstructed 3D particle tracks (bottom) than earlier techniques (top), which left gaps in the 3D images (see red circled areas for comparison). The improvement is crucial for distinguishing neutrino interaction signals (circled in green) from background signals generated by cosmic rays interacting with the fluid in the TPC. You can explore the controls that rotate and zoom in and out of these images at this link.

Brookhaven Lab physicist Brett Viren noted, “The ability to provide more accurate simulation of both noise and signals from LArTPC wires enables us to validate reconstruction techniques and quantitatively evaluate their efficiencies. These improvements will also facilitate the use of these simulations and modern machine learning techniques—which must have training sets that closely mimic the real thing—to improve LArTPC detector accuracy.”

The team has developed software for both the signal-processing algorithm and the improved signal and noise simulations in a “Wire-Cell Toolkit.” This software package can run on conventional central-processing-unit (CPU) computing architectures and could also be configured for the highly parallel architectures of high-performance computing (HPC) systems as well.

“All of these achievements in signal processing, simulation, and data-simulation comparison bring us closer to realizing the full potential of LArTPC detector technology,” said Brookhaven’s Qian. “We now look forward to the exciting results that will come from MicroBooNE.

“In addition, the advances at MicroBooNE build the foundation for detection and signal-processing techniques that will be used with larger LArTPC detectors—including those being developed for DUNE, which is scheduled to come online in the mid-2020s.” 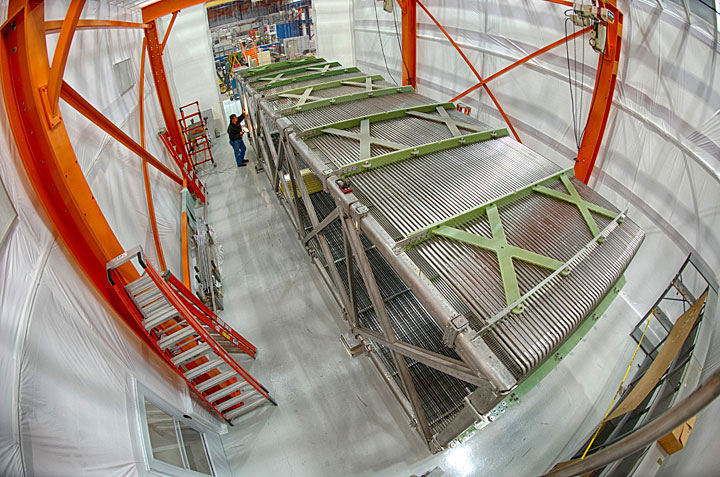 For DUNE, Fermilab’s Long-Baseline Neutrino Facility will shoot a beam of neutrinos through Earth from Illinois to an old gold mine deep underground in South Dakota. Up to four detectors in the cavern will build on bus-size MicroBoone’s ability to track particles with high precision by having colossal tanks each with 100 times the volume able to pin down particles’ positions to within a couple of millimeters.

“LArTPC detectors are the only technology that can achieve this precision at this large scale. That’s what makes them truly revolutionary,” Qian said.

Brookhaven’s role in MicroBooNE is funded by the DOE Office of Science.