Scientists have identified a catalyst for the reaction of carbon dioxide and propane that could help meet the demand for an important chemical building block used to manufacture plastics, textiles, electronics, and more 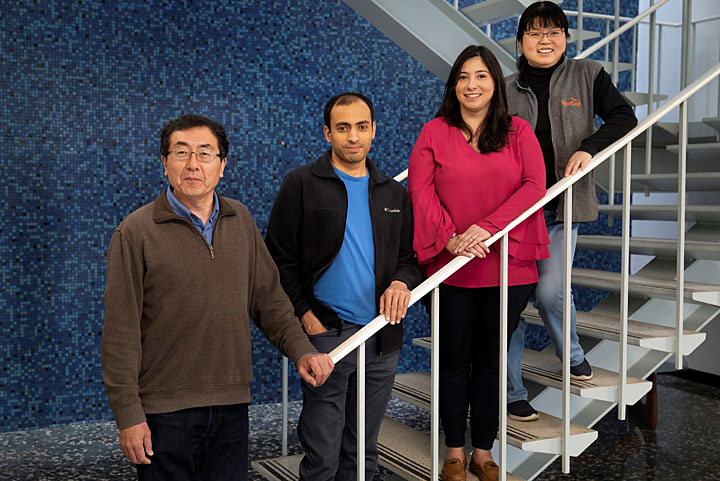 (Left to right) Chemist Jingguang Chen, research associate Shyam Kattel, PhD candidate Elaine Gomez, and chemist Ping Liu were part of the team that identified that an iron- and nickel-based catalyst can selectively break a carbon-hydrogen bond in the reaction of carbon dioxide and propane to produce an important industrial chemical called propylene.

What if a major heat-trapping greenhouse gas could be consumed to produce a valuable chemical that is in short supply? Chemists at the U.S. Department of Energy’s (DOE) Brookhaven National Laboratory have identified a catalyst—a substance that speeds up a chemical reaction—that may be able to do just that. This “bimetallic” catalyst, made of iron and nickel, drives the reaction of the greenhouse gas carbon dioxide and the energy-rich gas propane to produce propylene. Propylene is a chemical building block used in the manufacture of many everyday items, including batteries, automobile parts, and clothing and other textiles.

Historically, propylene has been a byproduct of steam cracking—a process in which a raw material (feedstock) is mixed with steam and heated to approximately 1500 degrees Fahrenheit inside massive furnaces that “crack” apart molecular bonds—to produce ethylene, the precursor for most of the world’s plastics. However, propylene is no longer being co-produced in the quantities needed to keep up with demand. Within the past decade, shale gas, or natural gas from fine-grained sedimentary rocks, has become very inexpensive in the United States because of technological advances in fracking. Shale gas mostly consists of methane but also contains fractions of ethane and propane. Industry has taken advantage of this abundance of low-cost ethane in feedstocks for ethylene production, but at the cost of propylene production. 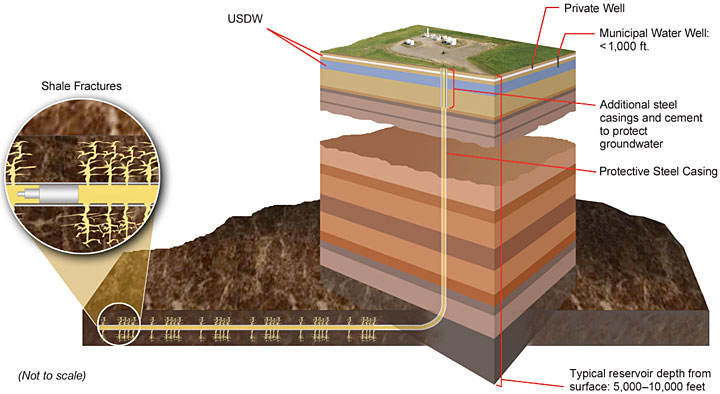 “The amount of propylene co-produced depends on the type of feedstock used, and ethane steam cracking is highly selective toward ethylene,” said Jingguang Chen, who holds joint appointments as a senior chemist at Brookhaven Lab and as the Thayer Lindsley Professor of Chemical Engineering at Columbia University. “Technologies that specifically target propylene production are needed to fill the gap for this important chemical.”

One of the existing technologies is propane dehydrogenation, in which two hydrogen atoms are removed from propane (C3H8) to make propylene (C3H6). But this process is very energy-intensive because of the high temperatures required to obtain substantial propylene yields. Though adding oxygen to the propane feed lowers the amount of energy required, in the presence of excess oxygen, propane burns to form water and carbon dioxide.

A new route for propylene production

In this study, the scientists found a more environmentally and energy-friendly approach by introducing carbon dioxide as a reactant, instead of a product.

“Carbon dioxide serves as the oxidant, reacting with propane to produce propylene, water, and carbon monoxide,” said Elaine Gomez, a PhD candidate in chemical engineering at Columbia University and member of Chen’s research group. Gomez is the first author on a recently published Nature Communications article describing the work.

In order for this reaction to proceed, the scientists had to design a catalyst that could perform two functions: activate carbon dioxide (a very stable molecule) and break a carbon-hydrogen (C-H) bond.

“The foundation of our catalyst is ceria, or cerium oxide, which activates carbon dioxide by freely exchanging oxygen,” explained Gomez. “On top of that support, we add the metals iron and nickel, which can break the C-H bond.”

On the basis of previous work conducted by Chen’s group, the team had a hunch about which catalyst to pick. Using computational resources at Brookhaven Lab’s Center for Functional Nanomaterials and Lawrence Berkeley’s National Energy Research Scientific Computing Center (both DOE Office of Science User Facilities), Brookhaven chemist Ping Liu and research associate Shyam Kattel calculated the amount of energy required for different steps of the catalytic reaction to proceed. Their calculations were based on x-ray absorption spectroscopy studies that Gomez and co-authors Bingham Yan and Siyu Yao of Brookhaven’s Chemistry Department performed at the Stanford Synchrotron Radiation Lightsource at SLAC National Accelerator Laboratory and the Advanced Photon Source at Argonne National Lab (also DOE Office of Science User Facilities) to identify the structure and composition of the catalyst’s active sites under reaction conditions. The resulting spectra revealed that the surface of the iron-nickel catalyst is oxidized during the reaction, and the calculations showed that this iron oxide–nickel interface encourages the breaking of the C-H bond.

“A computational method called density functional theory [DFT] allows us to calculate the thermodynamics and kinetics of the reaction pathway with a given catalyst to determine whether C-H bond breaking is energetically favorable,” said Kattel. “DFT predicts that the iron- and nickel-based catalyst is a good candidate.”

Gomez confirmed this prediction through flow reactor studies, in which the different reactant gases are fed from storage tanks into a single line connecting to a U-shaped glass-tube reactor. The gas mixture flows in one end of the tube and reacts with the powdered catalyst (at the temperature the catalyst is active—in this case, around 1000 degrees Fahrenheit) packed into the tube’s other end. As the products emerge, a separation technique called gas chromatography can be used to identify the type and quantities of chemicals present. By comparing the amounts of reactants consumed and products made, scientists can determine the catalyst’s selectivity toward the desired product. In this experiment, the selectivity was more than 50 percent for converting propane into propylene. 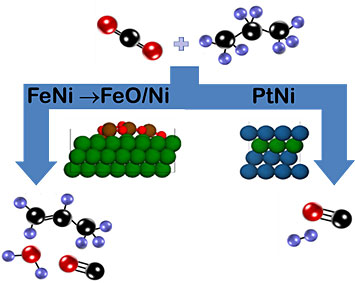 As shown in the schematic, carbon dioxide and propane can react on the iron-nickel (FeNi) catalyst to form propylene (left) or on the platinum-nickel (PtNi) catalyst to form syngas (right). In the case of FeNi, an oxide layer of FeO/Ni that forms during the reaction encourages C-H bond breaking. By contrast, the PtNi catalyst has no oxide phase. Color key: carbon = black, oxygen = red, hydrogen = purple, nickel = green, iron = brown, platinum = blue).

Using the same ceria support but replacing iron with platinum, the scientists promoted a different reaction pathway in which carbon-carbon bonds are broken to produce carbon monoxide and hydrogen—a combination known as synthesis gas (syngas), an intermediate for the production of ammonia, methanol, and other chemicals.

“Both catalysts are active at the same temperature, but by tuning their chemical composition, we can steer the reaction to produce propylene or syngas,” said Chen.

“We plan to use our current in-depth understanding of the reaction mechanism to further improve the conversion of propane into propylene,” said Liu. “This understanding enables the rational screening of catalysts at a theoretical level, and the promising candidates will be synthesized and tested experimentally.”

“We hope that industry and academia will consider our new route, which consumes a greenhouse gas and requires less energy than traditional propylene production methods,” said Gomez. “Translating our discovery into a commercialized technology could help meet the global demand for this high-value chemical.”

The work was supported by the DOE Office of Science.