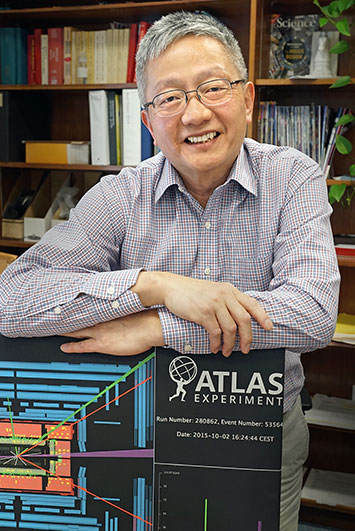 Hong Ma, a senior physicist at the U.S. Department of Energy’s (DOE) Brookhaven National Laboratory, will be recognized as a “highly accomplished Asian American professional” at the Suffolk County tenth annual Asian American and Pacific Islander Heritage Month Celebration. The event will take place Saturday, May 26, at the Thai Cultural Center in Centereach.

As the chair of Brookhaven’s Physics Department, Ma oversees some of the Lab's premiere nuclear and particle physics programs funded primarily by the DOE Office of Science.

"I am grateful to receive this award, which helps to highlight the important research being done at Brookhaven Lab in particle and nuclear physics, as well as Asian American contributions to the community,” said Ma.

Ma, who joined the Brookhaven physics staff in 1989, is best known for developing detector components for experiments at particle colliders. He has played a major role in designing and commissioning various detector systems and data analysis software for the ATLAS experiment at the Large Hadron Collider, the world's most powerful particle collider, located at the European Center for Nuclear Research. Brookhaven Lab serves as the host laboratory for U.S. scientists involved in research at ATLAS.

Ma also helped coordinate the Lab’s physics analysis program that contributed to the historic 2012 discovery of the Higgs boson, a subatomic particle long-predicted by the Standard Model of particle physics as the source mass for all other fundamental particles. He continues to contribute to the development of detectors for upgrades of the ATLAS experiment and future high energy physics experiments.

Ma earned a bachelor’s degree in 1983 from Fudan University in Shanghai, and a Ph.D. in physics in 1988 from the California Institute of Technology, where he continued as a research fellow until joining Brookhaven as a research associate in 1989. He was awarded a Junior Faculty SSC National Fellowship by the Texas National Research Laboratory Commission.  At Brookhaven, he was promoted through the ranks to physicist in 1994, group leader of the Omega Group and physicist with tenure in 2008, and senior physicist in 2016.

The Asian American and Pacific Islander Heritage Month Celebration will feature musical performances, dance, and martial arts, as well as presentation of awards to honorees. All are invited and admission is free.