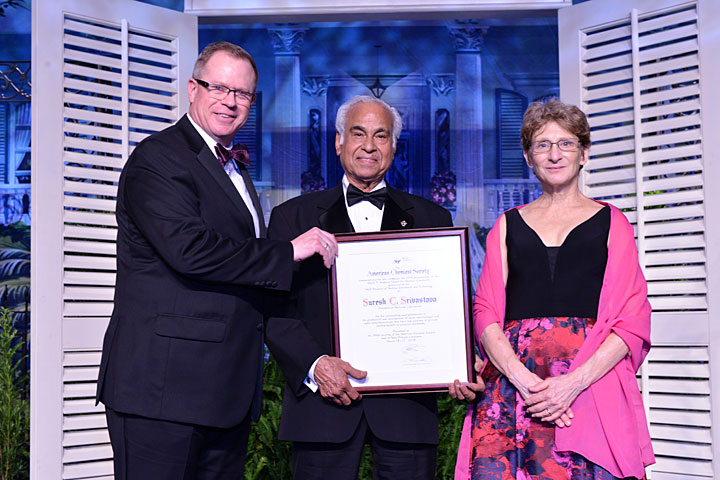 Suresh Srivastava retired from the U.S. Department of Energy's (DOE) Brookhaven National Laboratory and was named senior medical scientist emeritus in 2015. He flies to and from Costa Rica several times a year, helping his wife manage a 270-acre farm. He drives from his home in Setauket to visit his children and grandchildren in Connecticut and Pennsylvania as often as he can. And he is still passionately pursuing what's driven him since the 1960s: developing medical radioisotopes—atoms with unstable nuclei that emit energy that can be directed to diagnose diseases, treat them, and help save lives. 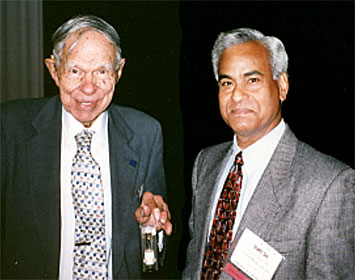 Suresh Srivastava (right) with the late Glenn Seaborg at the Society of Nuclear Medicine annual meeting in 1996. Seaborg is holding the first technetium-99m generator, a tool developed at Brookhaven Lab to produce the radioisotope used for diagnosing heart disease and other ailments. More than 40 million nuclear medicine procedures are done each year and technetium-99m accounts for about 80 percent those procedures, according to the World Nuclear Association.

Srivastava is now one of a small group of prominent scientists to receive the Glenn T. Seaborg Award for Nuclear Chemistry. Presented by the American Chemical Society's Division of Nuclear Chemistry & Technology, the Seaborg Award is given to recognize and encourage research in nuclear and radiochemistry or their applications. Srivastava was chosen for his outstanding accomplishments in the production and development of many radioisotopes and radiopharmaceuticals that have and continue to provide medical benefit to patients worldwide. He received the prize on March 20 in New Orleans during the American Chemical Society's 255th national meeting.

"Conceiving, developing, and promoting radioisotopes to diagnose disease and treat patients helped create new ways to fight disease and help humanity," Srivastava said. "It feels very good to receive this Seaborg Award. I am grateful for all the support and encouragement I have received from managers, coworkers, colleagues, family, and friends over the years. And I am not done yet."

'Theragnostics' for therapy and diagnostics

Scientists and researchers at Brookhaven produce a range of radioisotopes not commercially available with the Brookhaven Linac Isotope Producer built upon particle accelerator infrastructure for the Relativistic Heavy Ion Collider (RHIC), a DOE Office of Science User Facility. There they produce as much as half the nation's strontium-82 for generators to assess heart health. They are also collaborating on research for cancer therapy, producing actinium-225—an "alpha-emitter" for noninvasive treatment that kills cancer cells with minimal damage to surrounding tissue.

Srivastava is a pioneer in advancing theragnostics—a developing field of medicine with the primary objective of using the same radioisotope for therapy and diagnosis to provide patients with personalized medicine. His particular expertise includes the radioisotope tin-117m, which can diagnose and treat cancer and cardiovascular disease. Srivastava also promotes radionuclide molecular therapy and theragnostics in his role as immediate past president of the World Association of Radiopharmaceutical and Molecular Therapy (WARMTH), which has approximately 500 members in more than 50 countries. He was president of WARMTH from 2016 to 2017.

Srivastava's long history of research at Brookhaven Lab began in the Nuclear Energy Department in March 1965. He left in 1967 and, in 1975, returned to the Lab's Applied Science Department as an associate chemist. He joined the Medical Department in 1977 and was promoted up the ranks, receiving tenure in 1985. He became a member of the Collider-Accelerator Department in 2010, where he continues to his work as a senior medical scientist emeritus following his retirement in 2015.

Among Srivastava's earlier-career achievements was developing chemistry for "shake-and-bake" radiopharmaceutical kits. Radioisotopes are, by nature, unstable and they degrade over time. With the kits Srivastava developed, doctors could create technetium-99m-based radiopharmaceuticals for medical imaging as needed. They could literally shake up a kit to activate a chemical-technetium blend, reducing the radiopharmaceutical's time constraints by "starting the clock" when both doctor and patient were ready.

"More than 40 million nuclear medicine procedures are done each year. Technetium-99m—which was developed at Brookhaven and is used to diagnose heart disease and other ailments—accounts for about 80 percent those procedures, according to the World Nuclear Association," Srivastava said. "Looking back, it makes me feel so good that I had the opportunity to do this research, to help treat people who are sick and help save their lives."

Seaborg the scientist, and the award's namesake, was no stranger to Brookhaven Lab. In 1966, the Nobel laureate and then-chair of the Atomic Energy Commission—DOE's predecessor agency—gave the keynote address during a dedication ceremony for the Chemistry Building on site at Brookhaven. His remarks from the celebration are available online. Seaborg was also a member of the Chemistry Department's visiting committee. He died in 1999.

Scientists from Brookhaven Lab who also have received the Seaborg Award include National Medal of Science awardee Joanna Fowler; Nobel Laureate Ray Davis; former Chemistry Department Chair Gerhart Friedlander; Richard Hahn, who led an experiment that contributed to the 2015 Nobel Prize in Physics; and Alfred Wolf, whose discoveries were instrumental in developing positron emission tomography, or PET, which is used millions of times each year to diagnose disease and also to study brain activity.