STAR Detector on the Move

Watch as the STAR detector rolls to the assembly building to undergo maintenance.

Timelapse of the STAR detector being rolled from its normal spot in the interaction hall of RHIC to the assembly building to undergo maintenance.

How long does it take to roll a twelve-hundred-ton detector one hundred feet? In late August, it took 10 hours for the STAR detector to roll from its regular spot in the interaction region of the Relativistic Heavy Ion Collider (RHIC) to the assembly building to undergo maintenance. It’s all part of a program to keep this giant multi-purpose particle detector (kind of like a giant 3D digital camera) in tip-top condition for capturing subatomic smashups at RHIC, a DOE Office of Science user facility for nuclear physics research at the U.S. Department of Energy’s (DOE) Brookhaven National Laboratory.

STAR personnel dedicate some of the prep time making sure the detector will fit through the 27-by-27-foot opening between the interaction hall and the assembly building without any bumps or scrapes. Engineers designed and built the detector to fit through the “door,” leaving a few precarious inches of clearance. To make the squeeze, scientists have to disconnect power lines, vacuum lines, water-cooling lines, gas lines, and any external cables leading to other detector components. 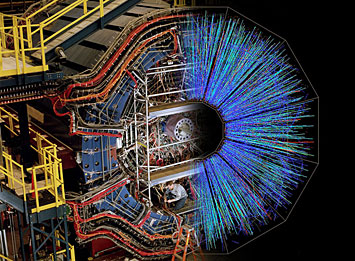 The STAR detector at RHIC with a superimposed image showing particle tracks emerging from a nuclear collision as picked up by the detector.

The amount of effort that goes into rolling STAR makes it a fairly rare occurrence. “I’d say maybe two out of every three years we’ve had to pull the detector out to do major maintenance,” said STAR physicist Gene Van Buren. This year they are upgrading a major component of the Time Projection Chamber (TPC), the large cylindrical component that results in STAR’s iconic particle track images. “The hardware that sits on the ends of the TPC to read out the signals of particles is something we haven’t touched since the experiment was begun in the late 1990s,” Van Buren explained. In addition to installing new hardware, the team will also install new electronics that will provide a more complete readout and better pictures.

By the first week of November, STAR should begin its 100-foot journey back to the interaction hall—in time to be ready for RHIC’s next experimental run.