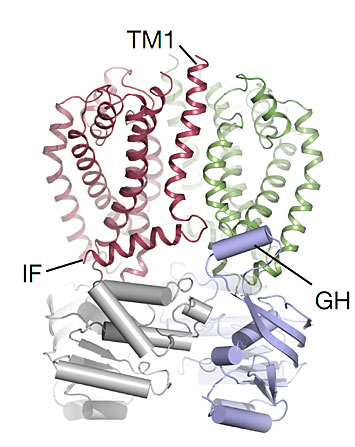 Wzm–Wzt O-antigen transporter shows a specific architecture: The Wzm protomers (green and red) are set on top of the the nucleotide-binding WztN domains (in blue and grey). The WztN forms a short gate helix (GH) near the Wzm protomer interface and Wzm contains an N-terminal interface helix (IF).

Scientists revealed a crystal structure for an O-antigen transporter, called Wzm-Wzt, in an unexpected channel-forming conformation.  This transporter can be found in cell membranes of highly abundant Gram-negative bacteria, and transports O-antigen polysaccharides across the inner cell membrane. Transmembrane channels are usually confined to ion channels and various toxins and are not observed in transporters that move solutes against their concentration gradient. However, the particular length of O-antigens requires the Wzm-Wzt transporter to utilize a special transport mechanism. Accordingly, its channel-forming structure stands in contrast to the classical ‘altering access’ mechanism frequently used by ABC transporters.

Gram-negative bacteria are commonly found in nearly every environment on earth that supports life. These bacteria have a special kind of protection mechanism that prevents immune reactions from the host organism they are trying to infect.  Cell surface polysaccharides, such as the lipopolysaccharide O-antigen, are important components of these protections. The O-antigen forms an extended barrier around the cell to prevent immune system reactions or drugs from fighting the bacteria effectively. Therefore, understanding how O-antigens are transported to the bacterial cell surface can help to overcome their protective functions and improve the treatment of many human infections.

In this study, the scientists produced and crystallized the O-antigen transporter called Wzm-Wzt. They used x-ray diffraction at NSLS-II’s Highly Automated Macromolecular Crystallography (AMX) and Frontier Microfocusing Macromolecular Crystallography (FMX) beamlines, and at Argonne’s beamlines SER- and GM/CA-CAT to determine the crystal structure of the transporter in its so-called open conformation. The structure revealed a channel-formation conformation of the ABC transporter, which reflects its function in biopolymer transport. A structure-derived model of the closed transporter structure was validated using biochemical experiments. Further, selected amino acids in transporter regions expected to be involved in O-antigen recognition and transport were changed to test their importance in O-antigen secretion in live bacteria. By combining the results of their different studies, the scientists developed a unique translocation model that stands in contrast to classical ABC transporter mechanisms.