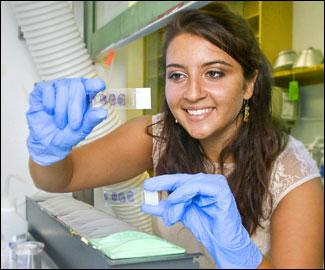 Each summer, BNL helps train the best and brightest of America’s emerging scientists through internships, providing a valuable chance to apply coursework knowledge in a real research environment during the undergraduate years. For college students, these few weeks spent at the Lab offer a “first taste” of what it’s like to be a career scientist. But some interns – like Christina Rombola – come to the table a bit early.

Rombola is not in college yet; she only recently graduated from Longwood High School – in nearby Middle Island, NY – this past May. Despite her youth, Rombola is an old hand at Brookhaven. She has actually interned under neuroscientist Peter Thanos since May of 2008.

While many of her peers might have spent their high school summers mowing lawns or babysitting for neighbors, Rombola chose to explore her main academic interest — science.

“I have always been a math and science person,” she said. “When I was looking for something to do in the summer, my guidance counselor pointed me to Brookhaven.”

In evaluating her options at BNL, Rombola “stumbled across” Thanos’ lab and applied to be a research assistant, not really expecting to make the cut. To her surprise, she was accepted and has excelled at her work ever since, staying on throughout the school year and into the current summer.

“I think it’s a great opportunity to see if the field [neuroscience] is something I would want to do as a career,” Rombola said of the internship.

Based on her performance thus far, she will likely make a top-notch candidate. As if her precocious tenure was not impressive enough, Rombola has accomplished something in her year at BNL that even most undergraduates only dream about: she is the lead author on a forthcoming abstract to a national science conference.

The abstract, “Effects of chronic mild stress and dopamine D2 receptor expression on ethanol self-administration, depression-like and open-field behaviors in the mouse,” will be published online and was accepted for a poster presentation by the Society for Neuroscience. Although research began before Rombola joined the team, this will be the first time these particular results will have been presented.

“Both disorders have been associated with the availability of dopamine in the brain,” she said. “Both are also heightened by environmental stress. We are basically trying to understand these relationships in humans by studying their effects in a mouse model.” 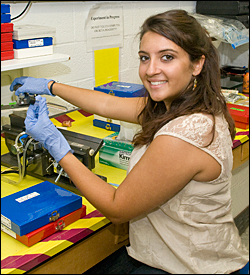 Previous work has shown that alcoholism may be related to low levels of dopamine D2 receptors (D2R) in patients, resulting in an increased desire to supplement dopamine levels though alcohol consumption. In addition, people who are diagnosed with alcoholism have a higher level of prevalence of depression than non-alcoholics.

Rombola’s project sought to determine what role chronic mild stress (CMS) plays in the relationship. In the experiment, mice that were wild-type (normal), heterozygous, and completely deficient for the gene “Drd2,” which codes for D2 dopamine receptors, were randomly placed in four exposure groups: control, CMS only, ethanol access only, and CMS plus ethanol access. Based on a number of behavioral tests completed over a four-week period, Rombola and her colleagues discovered that a mouse’s response to CMS, ethanol, or their combination was dependent on dopamine D2 receptor availability.

While normal mice had a significant preference for ethanol, stress decreased that desire.

Furthermore, when exposed to stress or ethanol alone, these mice responded with anxiety-like behavior, while the combination of the treatments created a tranquilizing effect.

In contrast, mice that did not express dopamine D2 receptors showed a lower preference for ethanol that was not affected by stress. Moreover, they were not affected by ethanol or stress alone, but developed anxiety-like behavior when exposed to the treatments concurrently. This suggests that the dopamine D2 receptor system determines an animal’s response to a combination of stress and ethanol.

Rombola will spend the remainder of the summer in Thanos’ lab completing this research, and she and her colleagues will present their findings this fall at the Society for Neurosciences’ annual conference in Chicago. In the midst of all this professional activity, she will also begin college at the University of Virginia in the fall with an intent to study biomedical engineering. And after that?

“I’m thinking about medical school,” Rombola said, adding “but I’ll see where it goes. I definitely want to be involved with the sciences.”

Reflecting on her unique experience at BNL, Rombola expressed gratitude for all the knowledge she has acquired on the job from a department full of “so many intelligent people.” She hopes to return in future summers to work on other projects, but for now, she is very proud of the work she and her colleagues have done.

“It’s been amazing to work on one problem for so long and to be finally getting a result,” she said. “Even if the answer is something simple, it is great to know that you found that out.”