Dancing With Science ...Or a Little Light Music

While writers have produced volumes of words on the beauty of scientific discovery, science and the performing arts have traditionally had a much lower rate of interaction.

However, such happy anomalies do sometimes occur.

Before the official speeches began at the National Synchrotron Light Source II Start-of-Construction Celebration on June 15, employees, users and guests of Brookhaven National Laboratory were reminded of the more poetic side of science by a distinctly non-verbal type of communication.

Slowly creeping in from stage right, a lone dancer dressed in fluorescent green quickly commanded the attention of the audience with tribal stomps and dramatic leaps, performing a contemporary dance piece titled “Time and Space for Celebration.”

Michelle Mitchell, a dance student majoring in engineering at Stony Brook University (SBU), seemed to question and explore her environment through movement, dancing to music that was both primal and futuristic. Her only companion on the stage was a giant three-dimensional geometric figure – an icosahedron – constructed of white PVC pipe.

A sense of curiosity, said Amy Yopp Sullivan, choreographer and director of the Center for Dance, Movement and Somatic Learning at Stony Brook, was the main inspiration for the piece.

“We [the creative team] played with the idea of a primal, organic creature interacting with a mathematical structure,” she recalled. “We explored the mystery of discovery.”

To convey the scientific aspect of the theme, Yopp chose a life-sized icosahedron – the 20-sided Platonic solid – to be the focal point of the piece. Mitchell interacted with the figure throughout the dance, approaching it with hesitation at first, but eventually dancing with and even inside of the structure. But the icosahedron was no arbitrary prop. 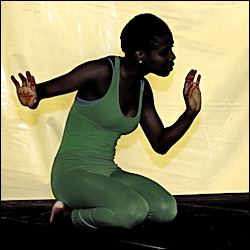 In addition to being visually striking, this figure also has strong ties to the “spatial harmony” ideas of the dance theorist Rudolf Laban. Working in the early decades of the 20th century, Laban is most famous for his development of a highly influential system of movement notation, much akin to the dots and shapes used by composers to represent sound. His further contributions included introducing concepts typically associated with music, such as scale, resonance, and harmony, to the world of dance. Like a symphony from the few notes of a theme, Laban’s theory facilitated the construction of large-scale choreography from the rudimentary materials of movement.

Another key element of Laban’s work was his intense fascination with the Platonic solids – the family of three-dimensional geometric figures which includes the tetrahedron, cube and icosahedron – and with what he saw to be the movements suggested by their division of space. Sullivan found this idea to be particularly relevant to “Celebration,” relying heavily on Laban’s work in constructing her choreography.

“Through Laban’s theory, we can understand how movement is organized by space,” Sullivan explained. “The shape of the space suggests certain pulls and following those pulls yields organization in the body.”

Mitchell added that it was “a lot of fun” to experiment with how her body could relate to the shape.

While the inherent structure of the icosahedron influenced much of Mitchell’s movements in “Celebration,” the accompanying musical score was equally important. Written by professional composer and SBU graduate student Max Giteck Duykers, the 10 minutes of music comprised a wide palate of electronic and acoustic sounds layered over driving rhythms.

According to Duykers, scientific concepts of light – appropriate for a new light source – figured heavily in his compositional process.

“I was thinking a lot about light frequencies and particles moving, slowing down and speeding up,” he said regarding the origins of the music. “You can hear that in the way that the tempo [speed of the beat] changes.”

Another notable aspect of the score was a repeated fluttering figure, a gesture that Mitchell seemed to imitate in her physical motions at times by quickly tapping her chest and stamping her feet. Remarking that as a choreographer, she “is always inspired by Max’s music,” Sullivan explained that this correlation has to do with the heart being the organic “core” of the body.

“The heart feeds the whole body. The fluttering in Max’s music seems to echo that enlivening process,” she said. Reflecting on the gesture, Sullivan and Mitchell agreed that the tapping motion may have been the actual seed of the choreography. “The rest probably grew organically from there,” Mitchell concluded.

Indeed, “organic” was the main word the artists used to describe the creation of the piece. A main question for both choreographer and composer, Sullivan said, was, “How do we remain connected to an organic existence in an increasingly artificial world?” In discussing the development of the work, the team stressed the importance of a “collaborative, creative process” in which the movements and music changed and grew toward the final product in tandem.

Considering the result of their efforts, each artist hoped that the audience would leave the performance with a new perspective on the connectedness of art and science, as well as an invigorated passion for discovery.

“I hope people see that they can reach past their current circumstances,” Mitchell said with a smile. “We shouldn’t be stagnant. We can go after our dreams.”

With a projected commissioning date in 2015, the scientists and engineers currently constructing NSLS-II are doing just that.