Secretary Perry (center) with Brookhaven staff Ming Lu (left) and Aaron Stein (right) in the clean room at the Center for Functional Nanomaterials.

"I do love me some national labs. They're just the most incredible, fascinating places across this country!"

That’s what U.S. Secretary of Energy Rick Perry told staff at the Department of Energy's (DOE) Brookhaven National Laboratory as he kicked off an all-hands meeting following his tour of the Lab’s facilities on Oct. 26.

"One of my jobs—and I think it's one that I'm pretty passionate about—is to go share with people across the country what is going on in your national labs and why what you're working on is really applicable to them," Secretary Perry said.

With his trek to Brookhaven, Secretary Perry has now visited all 17 national labs across the DOE complex. 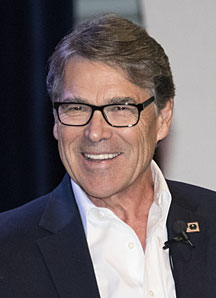 "The importance of the basic research, of the applied research, the theoretical work that we're doing—that you all are doing—this is cool stuff," he added.

After Secretary Perry finished his remarks and a question-answer session with Brookhaven Lab Director Doon Gibbs, Inclusion & Diversity Office Manager and Commander of the Lab's Brookhaven Veterans Association (BVA) Shirley Kendall presented Secretary Perry with a BVA challenge coin and he presented her with a challenge coin of his own. This is a longstanding tradition to honor individuals—in the military and elsewhere. Both Perry and Kendall are veterans of the U.S. Air Force.

The Secretary's all-hands meeting concluded with a performance of "God Bless America." Brookhaven employee Joseph Lee of the Inclusion & Diversity Office sang the song in honor of the 100th anniversary of Irving Berlin penning the lyrics while stationed at Camp Upton, the U.S. Army camp formerly located where the Laboratory was founded in 1947.

Lots to do and see in one day 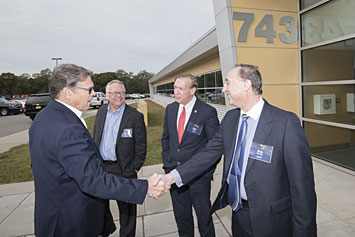 Secretary Perry's day began with a news interview in Manhattan, where he talked about the importance of America’s national labs and energy. After the 60-mile drive east to Brookhaven, he was first welcomed by Bob Gordon, manager of DOE's site office at Brookhaven, and many others, including Lab Director Gibbs; Stony Brook University President Samuel L. Stanley Jr., MD, who is chair of the board for Brookhaven Science Associates, the company that manages Brookhaven Lab on DOE's behalf; and U.S. Rep. Lee Zeldin.

The light source and BIG data

While on site, Secretary Perry visited key DOE Office of Science User Facilities and spoke with a number of Lab staff. After a brief Lab overview at the National Synchrotron Light Source II (NSLS-II), the Secretary toured the facility and its Soft Inelastic X-ray Scattering (SIX) beamline, and met with scientists researching energy storage and superconductivity solutions. NSLS-II produces light among the brightest in the world for unprecedented research capabilities to explore materials for advances in energy, environmental science, and medicine.

While at NSLS-II, Secretary Perry also talked about artificial intelligence and big data while learning about the Lab's growing Computational Science Initiative. Brookhaven is home to one of the largest scientific data archives in the world, containing more than 132 petabytes of data stored and accessible. For context, those 132 petabytes are equivalent to the amount of data required to stream high-definition video 24 hours a day, seven days a week for nearly 450 years. 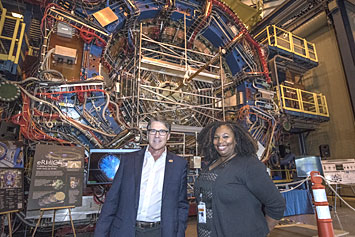 At the STAR detector at the Relativistic Heavy Ion Collider (RHIC), the Secretary talked about current and future nuclear physics research as well as about Brookhaven's medical isotope production program.

RHIC's accelerator infrastructure is vital for producing medical isotopes that save lives through cardiac diagnostics and research for new ways to image and treat—and beat—cancer. The infrastructure also provides particle beams for the NASA Space Radiation Laboratory where scientists' research is helping prepare for astronauts' longer missions in space and to Mars.

At the Center for Functional Nanomaterials (CFN), the Secretary met with two student interns who talked about their research experiences at the Laboratory. Brookhaven supports science, technology, engineering, and math (STEM) education, each year hosting more than 30,000 students, and interns—from those in the first grade to Ph.D. programs—plus teachers and professors, too.

Secretary Perry then entered CFN’s "clean room" nanofabrication facility, where researchers make and study materials at the billionths-of-a-meter scale for advances in energy, national security, and more. Perry also received a nanosized replica of the Statue of Liberty, created there by CFN scientists.

The Secretary's visit ended with the all-hands meeting and a small-business roundtable discussion with leaders from several energy companies that are working with the Laboratory. Click on the photo above to see a slide show of Secretary Perry’s visit to Brookhaven Lab on Oct. 26.