To the Moon, Gary

Meet BNLer Gary Stevens, who has joined the second race to the Moon 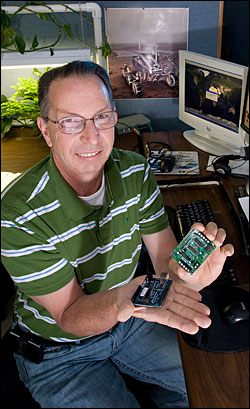 Gary Stevens holds two open source microcontrollers that will be used to help Team FredNet communicate with its spacecraft and rover.

There were only two competitors in the first great space race of the 1950s and 60s. Today, 19 teams from around the world are registered for the Google Lunar X PRIZE competition, the second great race to the Moon. Brookhaven Lab’s Gary Stevens of the Information Technology Department is now on that roster.

The Google Lunar X-PRIZE, also referred to as Moon 2.0, is an international race to land a robotic rover on the Moon. Once a team successfully does that, the rover must then traverse 500 meters while streaming high-quality images, video, and data back to Earth. Teams are also required be at least 90 percent privately funded in order to win the competition.

“There’s been a space race of some kind as far back as I can remember,” recalled Stevens. “I saw Sputnik fly overhead and watched every single NASA mission when I was younger. I would be glued to the television set the whole time — space exploration has always been a passion of mine.”

Stevens, who at the Lab monitors more than 200 on-site servers and the New York Blue supercomputer that can perform 100 trillion calculations per second, first learned of the X-PRIZE competition from an article on SPACE.com. Eager to join the race, he researched the various registered teams and contacted Team FredNet to see how he could help.

Team FredNet, named after the team’s founder and leader Fred J. Bourgeois, is based in California and made up of an international group of collaborators. It is also the only registered team that is specifically dedicated to creating and developing open source technologies that will be freely available to the public after its rover has successfully landed on the Moon and completed its mission.

“I’m a strong advocate for open source development,” explained Stevens. “I don’t feel that anyone should profit from space exploration. Developments should be done as cheaply as possible and should then passed on for the benefit of others.”

With an amateur radio license, strong command of the Unix computer operating system, and experience working at the Johnson Space Center, Stevens is now developing an extraterrestrial communications system for Team FredNet. This system will allow the team on Earth to send commands to its rover on the Moon while also receiving data, images, and video.

In the meantime, Stevens and his team members on terra firma primarily communicate using Skype, a free software program used for making voice and video calls through the Internet. “For the most part, we haven’t had any problems. The hardest part is coordinating everyone because we have team leaders in the U.S., Germany, and Vietnam — so someone always has to stay up late,” said Stevens. The team also communicates via e-mail and online forums, which according to Stevens, is very conducive to the team’s open source commitment.

“Moon 1.0 gave the world things such as Teflon, integrated circuits, computers, computer joysticks, insulin pumps, ways to keep vegetables fresh, and so much more,” Stevens said. “It is a tough legacy to follow, yet I hope we can give the world such gifts. And indeed, open source space access is a legacy unto itself.”

The first team to complete the Google Lunar X-PRIZE objectives by December 31, 2012 will be awarded $20 million dollars. If Team FredNet wins the award, all the money will be donated to educational programs and charities that have not yet been determined, said Stevens.

To learn more about the Google Lunar X-PRIZE competition, go to the the X-PRIZE website. And if you think you have the legs to join the second race to the Moon, Team FredNet is recruiting people with skills ranging from office work to rocket science. Those interested in joining the team should contact Stevens.