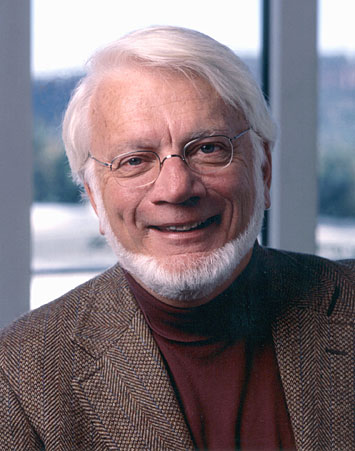 Thomas Steitz, one of three scientists awarded the 2009 Nobel Prize in Chemistry for studies of the structure and function of the ribosome—the enzyme found in all living cells that is responsible for messenger RNA (mRNA)-directed protein synthesis—died on Oct. 9 of pancreatic cancer at the age of 78.

Steitz was the Sterling Professor of Molecular Biophysics and Biochemistry and a chemistry professor at Yale University and investigator of Howard Hughes Medical Institute. He conducted most of the x-ray studies that led to his Nobel Prize in the late 1990s at the National Synchrotron Light Source (NSLS). This former U.S. Department of Energy (DOE) Office of Science User Facility at Brookhaven National Laboratory was replaced by the much-brighter NSLS-II in 2014. Steitz also contributed to the proposal for NSLS-II, presenting challenges and opportunities in the area of life science, and he participated in the very first workshop focusing on macro­mo­lecular crystallography at NSLS-II.

“Tom was an experienced structural biologist who had an unerring sense of important problems and great persistence in solving them,” said Brookhaven Lab biophysicist Robert Sweet, who first met Steitz in 1970 while at the Medical Research Council (MRC) Laboratory of Molecular Biology (LMB) in Cambridge, England. “His long-time use of NSLS had a significant impact on the facility’s reputation and its continued growth over the years, and his expertise was critical in shaping macromolecular crystallography at NSLS-II.”

The macromolecular x-ray crystallography experiments Steitz performed at NSLS beamlines were critical to his success in determining the structure of the ribosome. When x-rays interact with atoms in a crystal, they scatter in a way that is characteristic of the crystal’s structure. By analyzing the resulting x-ray scattering patterns, scientists can deduce the position of every atom in a crystal. Steitz and his Yale collaborators—the research group of Peter Moore, Sterling Professor of Chemistry and professor of molecular biophysics and biochemistry—used this technique to map the three-dimensional structure of the ribosome at atomic resolution.

“In about 1997, Tom called me and said, ‘Bob, we have crystals of the 50S ribosomal subunit,’” explained Sweet, who joined Brookhaven Lab’s Biology Department in 1983 and went on to become group leader of the Macromolecular Crystallography Research Resource at NSLS, constructing and operating several x-ray crystallography beamlines.

“Bob and his team at NSLS were instrumental in making Tom’s Nobel Prize possible,” said Moore. “They were always willing to fit us into the schedule when beam time was available. If someone cancelled, Bob would let us know. That meant we were constantly able to collect data.”

All living organisms have ribosomes, which translate the genetic code stored in DNA into long chains of amino acids called proteins. Ribosomes are composed of two subunits, one about twice the size of the other. For example, bacteria and archaea have a small (30S) and a large (50S) subunit. (The “S” stands for Svedberg, a unit for determining particle size based on the speed at which a particle settles to the bottom of a solution in response to a centrifugal force.) The small subunit reads the information encoded in the sequences of mRNAs, and the large subunit links the amino acid chains together.

At about the same time, structural biologist Venki (Venkatraman) Ramakrishnan of the MRC LMB, formerly of Brookhaven Lab’s Biology Department, was applying the same technique at NSLS, APS, and the European Synchrotron Radiation Facility in Grenoble, France, to solve the crystal structure of the 30S subunit. The research conducted by Steitz and Ramakrishnan was made possible by pioneering work done at the Max Planck Institute in Berlin, Germany, in the late 1970s by Ada Yonath of the Weizmann Institute of Science in Israel; this work resulted in the preparation of the first crystals of ribosomes and ribosomal subunits. The trio shared the 2009 Nobel Prize in Chemistry for their contributions to solving the structure of the ribosome. This knowledge has helped scientists determine how antibiotics interact with the ribosome, and it is likely to lead to the development of new drugs that are effective against antibiotic-resistant bacteria.

“Tom regarded crystallography as a means of answering questions about biochemistry, and used the technique to obtain the structure not only of the ribosome but also several other proteins involved in gene expression,” said Moore. “I would argue he was the leading structural biologist of his generation. One of the secrets of his success was the substantial intellectual investment he made in researching and understanding the different molecules he worked with.”

Steitz was born on Aug. 23, 1940 in Milwaukee, Wisconsin. He received a full scholarship to Lawrence College, graduating in 1962 with a bachelor’s degree in chemistry, and went on to receive a doctorate in molecular biology and biochemistry in 1966 from Harvard University. After a one-year postdoctoral fellowship at Harvard, he spent three years at the MRC LMB, working alongside Francis Crick and other prominent figures in molecular biology and biophysics. In 1970, he joined the faculty at Yale University, where he spent the rest of his career.

Steitz is survived by his wife of 52 years, the eminent scientist Joan A. Steitz, Sterling Professor of Molecular Biophysics and Biochemistry at Yale; their son Jon Steitz; daughter-in-law Katherine Van Loon Steitz; and two grandchildren. More information about Steitz’s personal life, contributions to science, and memorial services can be found in Yale’s obituary.