The following article was originally published by Rice University. Researchers at Rice came to the U.S. Department of Energy’s (DOE) Brookhaven National Laboratory to conduct x-ray scattering experiments for this research. The researchers used the Complex Materials Scattering (CMS) beamline at the National Synchrotron Light Source II, a DOE Office of Science User Facility at Brookhaven that is operated in partnership with the Center for Functional Nanomaterials, also a DOE Office of Science User Facility. The experiments at CMS enabled the researchers to measure the molecular organization of their materials, helping them identify the ideal formulation to yield materials that are stretchy and resilient, but also useable as a solar cell.

Organic solar cells that can be painted or printed on surfaces are increasingly efficient, and now show promise for incorporation into applications like clothing that also require them to be flexible.

The Rice University lab of chemical and biomolecular engineer Rafael Verduzco has developed flexible organic photovoltaics that could be useful where constant, low-power generation is sufficient.

Verduzco and his team incorporate a network of elastic additives that make the electrically active material less brittle with little to no loss of current flow.

The research appears in the American Chemical Society journal Chemistry of Materials.

Organic solar cells rely on carbon-based materials including polymers, as opposed to hard, inorganic materialslike silicon, to capture sunlight and translate it into current. Organics are also thin, lightweight, semitransparent and inexpensive. While middle-of-the-road, commercial, silicon-based solar cells perform at about 22 percent efficiency — the amount of sunlight converted into electricity — organics top out at around 15 percent. 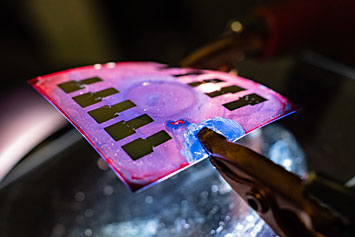 “The field has been obsessed with the efficiency chart for a long time,” Verduzco said. “There’s been an increase in efficiency of these devices, but mechanical properties are also really important, and that part’s been neglected.

“If you stretch or bend things, you get cracks in the active layer and the device fails.”

Verduzco said one approach to fixing the brittle problem would be to find polymers or other organic semiconductors that are flexible by nature, but his lab took another tack. “Our idea was to stick with the materials that have been carefully developed over 20 years and that we know work, and find a way to improve their mechanical properties,” he said.

Rather than make a mesh and pour in the semiconducting polymers, the Rice researchers mixed in  sulfur-based thiol-ene reagents. The molecules blend with the polymers and then crosslink with each other to provide flexibility.

The process is not without cost, because too little thiol-ene leaves the crystalline polymers prone to cracking under stress, while too much dampens the material’s efficiency.

Flexible organic photovoltaics under development at Rice have a chemical additive that mitigates the material's brittle qualities. The lab employs thiol-ene molecules that infiltrate the polymer and form a mesh that makes the material stretchable without losing efficiency. Photo by Jeff Fitlow

Testing helped the lab find its Goldilocks Zone. “If we replaced 50 percent of the active layer with this mesh, the material would get 50 percent less light and the current would drop,” Verduzco said. “At some point, it’s not practical. Even after we confirmed the network was forming, we needed to determine how much thiol-ene we needed to suppress fracture and the maximum we could put in without making it worthless as an electronic device.”

At about 20 percent thiol-ene, they found that cells retained their efficiency and gained flexibility. “They’re small molecules and don’t disrupt the morphology much,” Verduzco said. “We can shine ultraviolet light or apply heat or just wait, and with time the network will form. The chemistry is mild, fast and efficient.”

The next step was to stretch the material. “Pure P3HT (the active polythiophene-based layer) started cracking at about 6 percent strain,” Verduzco said. “When we added 10 percent thiol-ene, we could strain it up to 14 percent. At around 16 percent strain we started seeing cracks throughout the material.”

At strains higher than 30 percent, the material flexed just fine but became useless as a solar cell. “We found there’s essentially no loss in our photocurrent up to about 20 percent,” he said. “That seems to be the sweet spot.” 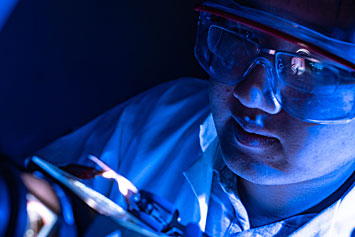 Rice undergraduate Changxu Sun mounts a flexible, organic photovoltaic cell to a test device. Scientists at the lab use a chemical additive to mitigate the material's brittle properties and make it more adaptable for applications like clothing or thin solar films for windows. Photo by Jeff Fitlow

Damage under strain affected the material even when the strain was released. “The strain impacts how these crystal domains pack and translates to microscopic breaks in the device,” Verduzco said. “The holes and electrons still need paths to get to the opposite electrodes.”

He said the lab expects to try different organic photovoltaic materials while working to make them more stretchable with less additive for larger test cells.

The research was supported by the National Science Foundation, the Welch Foundation for Chemical Research and the Department of Energy Office of Science Facilities.