After NASA astronauts first landed on the moon 40 years ago today, Brookhaven Lab scientists were among the first to analyze the rocks brought back from the lunar surface 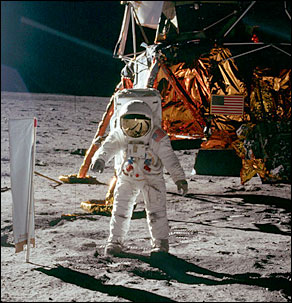 NASA astronaut Buzz Aldrin walking along the surface of the moon with lunar module "Eagle" in the background.

Forty years ago, NASA’s Neil Armstrong and Buzz Aldrin took those first few steps on the surface of the moon. And as the world witnessed this giant leap for mankind, Brookhaven Lab’s Raymond Davis, Warren Lyman, and Raymond “Dutch” Stoenner awaited the astronauts’ return. These three scientists from the Lab’s Chemistry Department were eager to conduct low-level radiation research on rock samples that the astronauts collected from the moon’s surface. The gases trapped in these rocks would be used to determine how long the moon’s surface had been exposed to cosmic rays.

On July 24, 1969, just days after Armstrong and Aldrin stepped down to the moon’s surface, the Brookhaven Bulletin published this article to highlight the BNLers’ work that would follow the Apollo XI Mission. (The actual Bulletin from that day can be found here.)

Those Moon Rocks In The Lunar Box

Flight No. I to the moon, scheduled to depart earth on July 16, 1969, lifted off from Cape Kennedy on time with a full complement of crew and supplies, including two empty boxes.

Thus began one of man's most exciting adventures into the unknown, and as Apollo XI sped through the quiet emptiness of space, every mile was accompanied by millions of silent but fervent best wishes of the many earthlings whose travel reservations to the moon would have to wait for later flights. 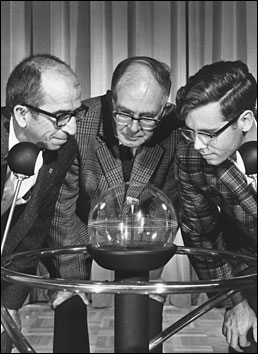 From left, Raymond (Dutch) Stoenner, Raymond Davis, and Warren Lyman take a close-up look at a moon rock returned to Earth by Apollo XI. [This photo appeared in a later issue of the Bulletin.]

Keeping to a timetable that is the envy of every airline and railroad on earth, the moon express completed its 250,000 mile run on schedule, touching down at Tranquility Base with all systems go.

As millions watched back home, the astronauts stepped out on the earth's first spaceport, and immediately got to work to carry out their assignments. Principal investigations included the establishment of a lunar wind experiment, a lunar laser target, a seismology experiment, and the collection of lunar dust and rocks.

It's the lunar box filled with moon rocks that is of great interest to three BNL scientists in the Chemistry Department, who will be waiting anxiously in the Houston Space Center when the samples are delivered there.

The three scientists are Drs. Raymond Davis, Ray (Dutch) Stoenner, and Warren Lyman. In last week's Bulletin, we left them in the elevator that was taking them from their ground level laboratory to the Radiation Counting Laboratory (RCL) located some fifty feet below ground.

The samples of gas that the BNL team expects to be taking down to the RCL include argon, krypton, xenon, which will be obtained directly from the lunar rocks and dust, as well as radon, which may be part of the lunar atmosphere entrapped in the rock box along with the lunar specimens.

The RCL is located next to where the astronauts will be "whole body counted" for radiation, similar to what is done routinely in our own Medical Department. In the RCL itself, there will be a variety of equipment for conducting radiation counting procedures on the samples. In one corner, behind some lead shielding, the BNL team will count the radiation in the gas samples they have carefully prepared.

According to Dr. Davis, they will be specifically looking for Argon-37 and 39, Krypton-85, Xenon-133, and Radon-222, even though the "odds against finding any radon are great."

The samples can be prepared for counting in a matter of a few hours, but the actual counting will probably take several days per sample. The RCL is equipped to handle eight samples at a time. How long the BNL team stays in Houston depends upon the number of samples they will have to count.

The information obtained from the BNL research is expected to yield significant knowledge on how long the lunar surface has been exposed to cosmic rays.

Galactic cosmic rays, which have a wide energy spectrum up to ten billion-billion electron volts, produces radioactivity in depth, while solar cosmic rays (from solar flares) are lower in energy and would thus produce radioactivity near or on the surface. The in-depth sample will come from the coring tool. However, if you remember from watching TV, the coring tool hit an immovable object some five inches below the surface, so the results of the in-depth check are in doubt. 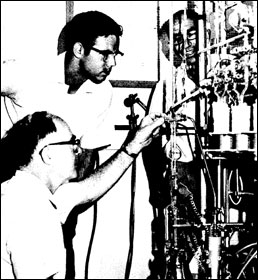 Dr. Davis shuts the valve after gas has been separated and trapped in the small glass counter at the top of the column just above the forehead of Dr. Stoenner, Watching intently is Dr. Lyman. These BNL scientists are going through a "dry run" in the Chemistry Department in preparation for going to Houston where they will conduct low-level radiation counting research on the lunar samples brought back to earth by astronauts Armstrong, Aldrin, and Collins in the historical flight of Apollo XI.

The reason that BNL's experiment, and others, must be done in Houston during the 45-day quarantine period, is that argon, for example, has a half-life of 35-days, which is less than the quarantine period.

After the moon samples have been counted, experiments will be conducted here at BNL which will be the result of use of an accelerator beam of protons to bombard a target to produce argon and compare it with the data from the moon samples. The accelerator to be used will probably be the 600 MeV cyclotron at Langley Field, Virginia. The targets will be composed of many different materials put together in a way that the total will be very close to the composition of the moon material. The target will probably consist of slabs of glass containing silicon and oxygen, plus slabs of calcium, potassium, magnesium, aluminum, iron and titanium.

These experiments will closely simulate what has happened for eons on the moon, where the surface material is believed to be mostly a basaltic type rock, produced from cosmic activity consisting of approximately 90 per cent protons constantly bombarding the moon.

How much of the pre-Apollo XI speculation turns out to be fact will become known in the coming weeks as the many scientists conduct their research on the samples brought back to earth by Armstrong, Aldrin and Collins. As this information develops, the Bulletin will keep its readers informed.

For now, we conclude with thanks for a successful mission, and best wishes to Davis, Stoenner, and Lyman in their quest for information on when and how the moon came to be what it is.