During the summer of 2009, writer Lizzie Wade and photographer Nick Russell are traveling across the United States visiting sites related to the past, present and possible futures of American high energy physics research. Recently, they visited Brookhaven's Relativistic Heavy Ion Collider. The following article is reproduced from their blog, "Summer of Science." All photographs are copyright Nick Russell.

The Relativistic Heavy Ion Collider (RHIC) at Brookhaven is a medium-to-high-energy machine that plays a unique role in the study of the early universe. While most particle accelerators collide single particles (like protons and antiprotons in the case Fermilab’s Tevatron), RHIC’s main purpose is to collide gold nuclei, each of which contains 79 protons.

Why the additional mass? 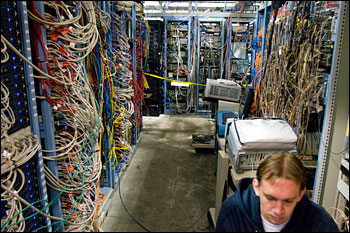 Wade: "Chris Pinkenburg assured us that they know what all of these cables do." (Photo courtesy of Nick Russell)

RHIC uses collisions like that to produce and study quark gluon plasma, the substance that existed ten millionths of a second after the Big Bang. Quarks are the building blocks of protons, neutrons, and most of the other particles that make up normal matter, and these days they are never seen alone. They are held together by the strong force, which is carried by particles called gluons. The strong force acts like a spring: as the quarks get farther away from each other, the force between them increases, which prevents them from ever leaving the confines of the particle. But at the temperatures and pressures that existed right after the Big Bang, quarks and gluons existed free of particles, moving instead in quark gluon plasma.

Scientists at RHIC initially believed that quark gluon plasma would behave, well, like a plasma, or an ionized gas: they expected to see the unconfined quarks and gluons moving freely within the substance. What they saw instead was a substance that behaved more like a liquid. The quarks and gluons, while unconfined, were still limited in how much they could move by the simple fact that there were so many of them. 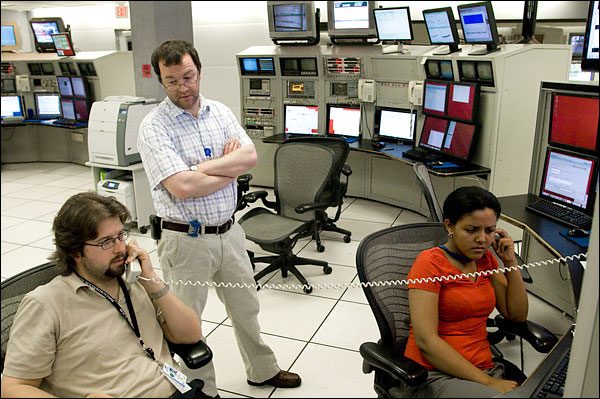 Wade: "The machine went down just before we visited Main Control, and everyone was working to analyze the problem and estimate the time until it would be fixed." (Photo courtesy of Nick Russell)

Not only does the quark gluon plasma observed at RHIC behave more like a liquid than a gas, it has the properties of a perfect fluid, one that flows with no viscosity. (If you stuck your finger in a perfect fluid and started it spinning, it would never stop.) These things were big surprises for the scientists at RHIC, and they are continuing to improve their detectors and explore how quark gluon plasma behaves at different energies. ALICE, the heavy ion experiment at the Large Hadron Collider, will be able to study quark gluon plasma at much higher energies, where there is a chance it will behave like the gas everyone first expected to see.

The two detectors currently operating at RHIC are STAR and PHENIX. Like any experiments using the same machine, they have a healthy rivalry even though they are designed to complement each other. PHENIX is used for precision measurements; it’s able to trace certain kinds of particles back through all their permutations after a collision. STAR looks at the big picture, taking a photograph of all the particle tracks that emerge after a collision.

Both detectors depend on the RHIC accelerator to push the particles close to the speed of light before smashing them into each other. But RHIC can’t do it alone — it needs several booster accelerators to get the particles up to top speed. The most notable of these is the Alternating Gradient Synchrotron (AGS), which was one of the most powerful accelerators in the world in the 1960s and 1970s. Work done with the AGS produced three Nobel Prizes in phyiscs (1976, 1980, and 1988) and set the stage for all current and future high energy physics research. 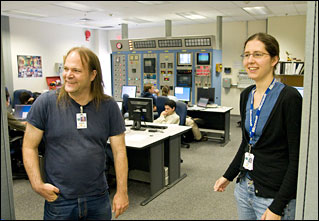 The AGS now serves as the injector for RHIC — a good example of the responsible, innovative recycling of lab resources and a poetic statement about how today’s scientific research depends on work that was done in the past. As Anne Sickles, a shift leader at PHENIX, eloquently put it, “Today’s Nobel Prizes are tomorrow’s calibrations.”

Brookhaven is a relatively small lab and [compared to a project like the Large Hadron Collider] RHIC is a relatively small project, but that made the experiments seem particularly personal. Working 24/7 to take data can certainly be exasperating, but it also seemed exhilarating in a way unique to projects dependent on teamwork and collaboration. Each experiment at the LHC will have thousands of scientists working on it, and I wonder if they will all feel the sense of ownership, pride, and camaraderie evident in the much smaller halls of RHIC.

The original article, "A Closer Look at RHIC," with additional photographs, appears on the Summer of Science website.