Quick Q&A with a RHIC Postdoc at Brookhaven Lab 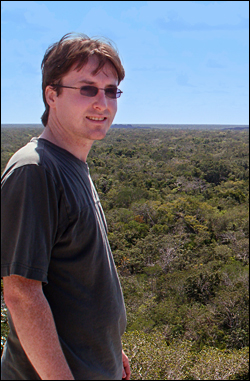 What do you do at RHIC?

I study the stuff that flies out when we smash protons traveling at near the speed of light and I focus on a chargeless particle called a pion (or pi0).

What are you trying to achieve?

Protons are made up of tinier particles called quarks, which are stuck together inside by gluons. I want to understand the gluon’s role in the makeup of the proton, particularly in the proton’s spin.

RHIC is the only polarized proton collider in the world. It allows us to measure the spin contribution of the gluons and how everything fits in with what we know about protons.

Previous understanding of the gluon’s role has been limited. Our new result gives a much better picture of how much of the proton’s spin comes from gluons, but precision measurements will have to wait for future RHIC runs.

At an “End of Run” party, someone brought some two-liter bottles of Diet Coke and a ton of Mentos. All of the physicists I work with decided to experimentally discern the reason soda shoots out when Mentos are dropped in the bottle — all the while trying not to get covered in soda.

I worked primarily with a group of scientists from BNL and Stony Brook. However, results such as this would not be possible without the joint effort of all members of the PHENIX collaboration (over 400), and the support of the Lab’s Collider-Accelerator Department.

The RHIC Spin Collaboration brings theoretical, experimental, and accelerator physicists together frequently to discuss many different issues that are key to getting the best physics results from RHIC. I developed a much broader and deeper understanding of how all the parts come together and how best to achieve our physics goals by attending these meetings during graduate school.

Editor's Note: A paper Boyle wrote was highlighted in the August edition of Nature Physics. Titled Gluon-Spin Contribution to the Proton Spin from the Double-Helicity Asymmetry in Inclusive pi0 Production in Polarized p+p Collisions at sqrt(s)=200 GeV, the piece was originally published in Physical Review Letters on July 3, 2009.

Boyle added, “This paper, as well as my thesis, relies primarily on data from the 2006 RHIC run. These results were available thanks to $13 million in funding from Renaissance Technology, which ensured that the run was not cancelled.”