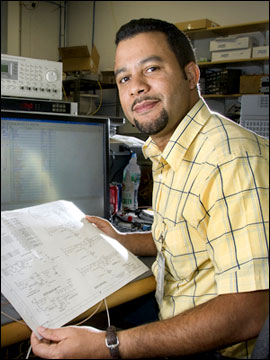 The Hispanic Engineer National Achievement Awards Conference has chosen Freddy Severino, an engineer in the Collider-Accelerator Department (C-AD), as one of 29 Luminary honorees. The honorees are Hispanic engineers and scientists from corporate, government and military sectors who are recognized for their contributions to the Hispanic technical community as leaders and role models.

Severino will be given a plaque in recognition of his technical achievements at BNL on October 9 at the organization’s annual conference in Long Beach, California.

“I am honored to receive this award,” Severino said. “I’m fortunate to work with a great team of people at the Collider-Accelerator Department, and within the Radiofrequency Group, in particular. Our achievements are the result of a lot of hard work and strong collaboration among many talented individuals.”

As part of C-AD’s Radiofrequency (RF) Group, Severino is responsible for the design and operation of RF systems for all the accelerators in the C-AD complex. These include both operational machines, such as the Relativistic Heavy Ion Collier (RHIC), and cutting-edge R&D accelerators, such as the Energy Recovery Linac. Accelerator RF systems are used to control beam energy, maintain and manipulate the “bunching” of particles, stabilize particle motion, and control critical parameters, such as the distribution or spread in energies among particles.

“Basically, RF cavities provide ‘kicks’ to charged particles as they circulate in the accelerator ring,” Severino said. “These kicks can increase or decrease a particle’s energy, and by careful application and control, we can manipulate the motion of the particles to achieve the required performance. For example, we can kick all the particles simultaneously each time they travel around the ring, accelerating them to the energy desired by experimenters.”

Among Severino’s many achievements, of major significance were his contributions to the RHIC stochastic cooling project, in which he designed hardware and software crucial to the system. The stochastic cooling system, which is being expanded for the upcoming tenth RHIC run, is critical to increasing “integrated luminosity,” which is the number of useful collisions provided for experiments during the run. The system was recently cited as one of the Lab’s great R&D success stories. (See stories from 11/9/07 and 6/26/09.) Severino is the coauthor of three peer-reviewed papers on the stochastic cooling system, and he is also named in several other scientific papers for his contributions in accelerator operations.

Severino has won three Spotlight awards for work on various technical projects. Currently, his primary focus is on the design and development of an embedded control architecture forming the heart of a new low-level RF control system at C-AD. His work on this system won an award for best poster presentation at the 2007 International Conference on Accelerator and Large Experimental Physics Control Systems.

Born in the Dominican Republic, Severino came to the U.S. in 1992. He joined BNL in 1996 as a senior technician, and his roles and responsibilities were steadily increased until he was named to his current position as project engineer in 2008. He earned a B.S. from the State University of Farmingdale in 1998, and an M.S. from Hofstra University in 2006. He is a member of the Association for Computing Machinery.