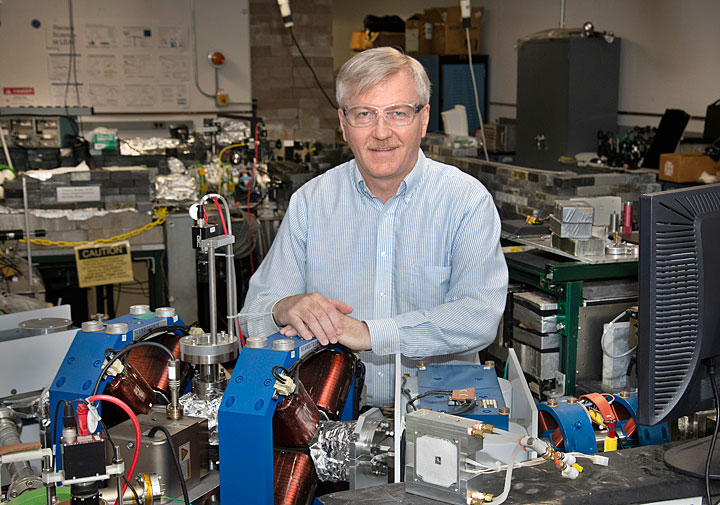 James Wishart, a chemist at the U.S. Department of Energy’s (DOE) Brookhaven National Laboratory, has been awarded the Maria Skłodowska-Curie Medal by the Polish Radiation Research Society (PRRS). The award recognizes his distinguished achievements in the field of radiation chemistry and his long-lasting and productive interactions with Polish scientists. Wishart will receive the award at a ceremony during the society’s 18th meeting in Kielce, Poland, on Sept. 16, 2019.

“Receiving this medal is a great honor,” said Wishart, noting a legacy among radiation chemists that goes all the way back to Marie Curie. Born Maria Skłodowska in Warsaw, Poland, in 1867, Skłodowska-Curie and her husband, Pierre Curie, established the fields of radiochemistry (isolating and characterizing radioactive elements such as polonium and radium) and radiation chemistry (the study of chemical changes induced by ionizing radiation).

“Marie and Pierre Curie were the first people to report on the chemical effects of radiation, back in 1899,” Wishart noted. If radiation has high enough energy, it can knock electrons out of molecules, resulting highly reactive negatively and positively charged ions, he explained.

The Maria Skłodowska-Curie Medal was established in 1983. It is awarded to Polish and foreign scholars for their outstanding achievements in the field of radiation studies and contribution to development of this research in Poland. The medalists are appointed by the General Council of the Polish Radiation Research Society (PRRS) by a secret ballot. PRRS is a professional organization of scientists who are interested in the studies of irradiated matter and in practical applications of ionizing and nonionizing radiation. The mission of the Society is to promote, support, and popularize the development of radiation research. The Society provides opportunities for an exchange of ideas among its members, and fosters links between the scientific community and the general public. It also plays a unique educational role by organizing open seminars and ‘schools’ devoted to various aspects of ionizing and nonionizing radiation. The Society promotes international collaboration in radiation research and supports participation of its members in important scientific events.

Nearly 100 years later, in 1998, Wishart opened the Laser Electron Accelerator Facility (LEAF), in the Chemistry Division at Brookhaven Lab. LEAF was the first photocathode electron gun accelerator in the world designed for pulse radiolysis studies. It produces ultrashort (picosecond) pulses of radiation to initiate chemical reactions and has equipment for tracking how—and how fast—molecules change in real time as they undergo reactions. LEAF is one component of Brookhaven Lab’s Accelerator Center for Energy Research (ACER), which is supported by the DOE Office of Science.

Studying exactly what products are created by ionizing radiation and how they react can help scientists better understand the details of how radiation affects materials, including biological samples such as cells and DNA. Researchers use these studies to determine how to control radiation effects to avoid damage to materials and living things, and to create, improve, modify, or stabilize valuable materials. For example, radiation is used to produce hydrogels used in wound care, to make heat-shrinkable plastics, to preserve food, and to protect artworks from microbes and pests.

Radiation chemistry is also important for designing effective and sustainable systems to recycle nuclear fuel by separating reusable elements from waste. “The chemicals used to do the separation are going to be exposed to radiation,” Wishart explained. “If they are damaged by radiation, they might not work or might work in the wrong way. We can use a facility like LEAF to figure out how to protect separations systems from radiation damage.”

Radiation chemistry at LEAF has also played an essential role in studying the reactions of “artificial photosynthesis”—an effort to mimic the process that plants use to convert sunlight, water, and carbon dioxide into useful hydrocarbons like sugar and fuels. “Pulse radiolysis is a great way to study the individual steps of these chemical reactions,” Wishart said. “The radiation produces separated electric charges, which can be used to study the reactions of artificial photosynthetic catalysts that store energy from light in the form of fuel. Brookhaven Lab chemists have used LEAF to discover previously unknown steps in these reactions—chemical species that don’t live long enough to be seen on the benchtop, but which are critical intermediates,” Wishart said.

Wishart’s contributions to radiation chemistry go far beyond inspiring and facilitating experiments at LEAF. Today, there are seven other picosecond pulse radiolysis facilities similar to LEAF operating or under construction around the world, and Wishart has connections and collaborations with scientists throughout the radiation chemistry research community.

In 2016, with the help of Noel Blackburn and the staff of Brookhaven Lab’s Office of Educational Programs (OEP), Wishart founded the International Conference on Ionizing Processes to bring together leaders in radiation chemistry as well as young scientists and students. The second ICIP meeting was held in 2018, the third will be in 2020, and Wishart expects the conference to continue every two years.

Wishart has served directly as a mentor to more than 60 undergraduate and graduate students at Brookhaven Lab, with many of these students returning for multiple years through programs sponsored by DOE and OEP. He was recognized as an Outstanding Mentor by the DOE Office of Science in 2006. In 2010 he received a Keeper of the Alliance Flame Award from the New York City Lewis Stokes Alliance for Minority Participation, for his contributions to increasing diversity in undergraduate research. He has participated in numerous conferences, delivering over 100 invited talks abroad, including twelve in Poland, and he has hosted collaborators, postdocs, and International Atomic Energy Agency Fellows from Poland throughout his career. His trip to Kielce to receive this award will mark his tenth visit to Poland.

“I have also made a personal pilgrimage to special locations connected to Marie Skłodowska-Curie,” he said. “I’ve been to the Curie Museum in Paris several times, to Marie and Pierre’s final resting place in the Pantheon, and I have also been to her birthplace in Warsaw.”

Wishart graduated from MIT in 1979 and received his Ph.D. in Inorganic Chemistry from Stanford University in 1985, where he held a National Science Foundation Graduate Fellowship. After serving as a postdoctoral research fellow at Rutgers University (1985-87), he joined Brookhaven Lab as a staff scientist in 1987 and was promoted to Senior Chemist in 2011.

In 2018, Wishart was selected to lead a new Energy Frontier Research Center (EFRC) established at Brookhaven Lab— known as the EFRC on Molten Salts in Extreme Environments (MSEE)—to explore the properties of a class of materials composed entirely of positively and negatively charged ions that exist in the liquid state under elevated temperatures. These materials have many potential uses, including as coolants and fuels in nuclear reactors. The team led by Wishart will use specialized tools—including Brookhaven Lab’s National Synchrotron Light Source II (NSLS-II), the Chemistry Division’s ACER facilities, and the Spallation Neutron Source at Oak Ridge National Laboratory—to explore how these materials behave at extreme temperatures while exposed to intense radiation.