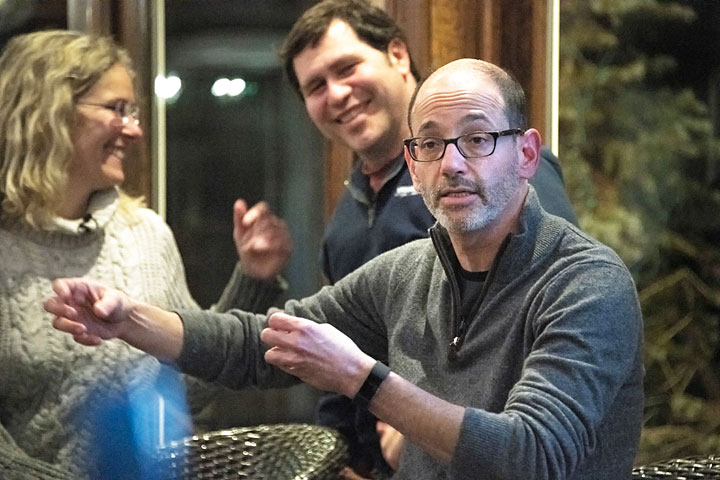 On the evening of Mar. 7, 2019, the U.S. Department of Energy’s Brookhaven National Laboratory held its 12th installment of PubSci, the Lab’s science café and conversation series. Three Brookhaven scientists headed to The Snapper Inn in Oakdale, New York to discuss their research in a casual setting during an event titled, “PubSci: Big Bang Physics and the Building Blocks of Matter.”

The evening’s panel featured three physicists involved in research at Brookhaven’s Relativistic Heavy Ion Collider (RHIC): Angelika Drees from the collider-accelerator department, Ofer Rind from the scientific data and computing center, and Gene Van Buren from the STAR detector at RHIC. Together, the panelists discussed how they work as a team to solve the mysteries of the early universe using RHIC, the only operating particle collider in the U.S. and a DOE Office of Science User Facility for fundamental nuclear physics research.

Particle collisions at RHIC heat up ordinary matter to recreate the superhot conditions that existed in the universe 13 billion years ago, just moments after the Big Bang. The heat melts protons and neutrons, freeing their inner building blocks, called quarks and gluons, from confinement. At PubSci, Drees discussed how RHIC is designed to accommodate these experiments; the facility is actually two particle accelerators in one, built with two crisscrossing rings that have a circumference of 2.4 miles. Van Buren discussed how the house-sized STAR detector takes billions of snapshots of the debris produced from these collisions, and Rind covered how high-performance computing helps scientists make sense of the data.

The panelists concluded the night by discussing the scientific questions that are driving the 19th experimental run at RHIC, which began earlier this year. Now, physicists at RHIC are studying the details of the low-energy “phases” of nuclear matter. 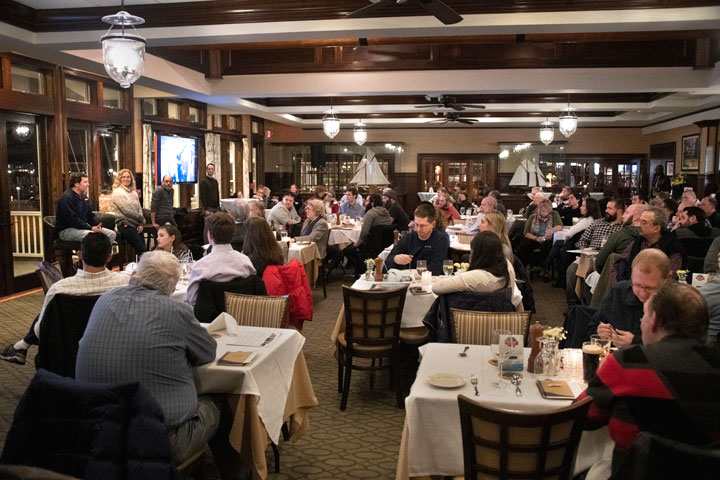 “Think about the terms ‘liquids,’ ‘solids,’ and ‘gasses.’ Usually when people think about those terms the first thing that pops into their minds is water,” Van Buren said at PubSci. “All these ‘phases’ are a result of how water molecules stick to each other. For example, when water molecules get really hot, the molecules have so much energy that they stop sticking to each other, and that’s what creates steam. Nuclear matter has similar phases, and RHIC is the equivalent of our ‘stove.’ When cold nuclei collide at RHIC, they create matter that is trillions of degrees.”

Nearly 100 community members attended this PubSci event and the audience offered up many questions, delving into energy and chemistry of particle collisions. Those who missed this PubSci event will have an opportunity to listen back via the PubSci Playback podcast. New episodes are typically released two months after the live event.

Since 2014, PubSci has offered the Long Island community a chance to see a casual side of the cutting-edge research happening every day at Brookhaven Lab and chat with the Lab’s scientists over a drink. The series hops around Long Island covering different topics from the Big Bang to tomorrow’s technologies. Stay tuned for an announcement on the next PubSci!