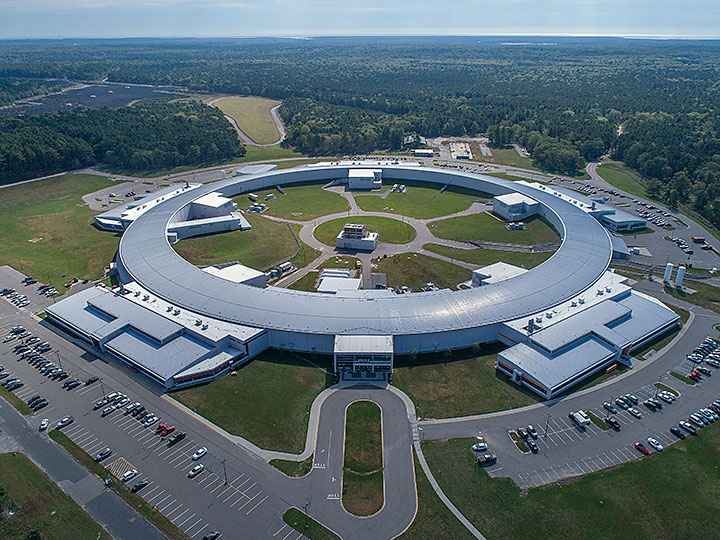 An aerial view of NSLS-II. The facility is large enough to fit Yankee Stadium inside its half-mile-long ring.

“It is astonishing to me how much we have accomplished in just five years,” said NSLS-II Director John Hill. “Every day when I come to work, I am proud of what we have achieved through the expertise, dedication and passion that everyone here brings to NSLS-II.”

The legacy of light sources at Brookhaven Lab

Synchrotron light sources like NSLS-II produce extremely intense light (from infrared to x-rays), which scientists can use to “see” the inner structural, chemical, and electronic makeup of materials, down to the atomic scale. From protein structures to chemical processes in batteries, light sources illuminate scientific mysteries of all kinds. But in decades past, this ultrabright light could only be produced as a byproduct of particle accelerators and it was widely considered to be a nuisance.

As the scientific value of ultrabright synchrotron light became well-recognized in the early 1970s, two scientists at the U.S. Department of Energy’s (DOE) Brookhaven National Laboratory, Renate Chasman and G. Kenneth Green, pushed the field forward by developing a novel magnet configuration for synchrotron storage rings that optimized the brightness of light sources. Their design became the basis for Brookhaven’s National Synchrotron Light Source (NSLS), NSLS-II’s predecessor, and later led to the rapid growth of major light source facilities around the world.

NSLS was one of the first research facilities designed and built specifically for producing ultrabright light or “synchrotron radiation.” NSLS was also the first DOE facility dedicated to “user” research; rather than tackling a single large scientific question, NSLS served many users who conducted individual experiments and came from diverse areas of science and the world. The model gave birth to the DOE Office of Science User Facility program and, ultimately, research at NSLS was awarded two Nobel Prizes. 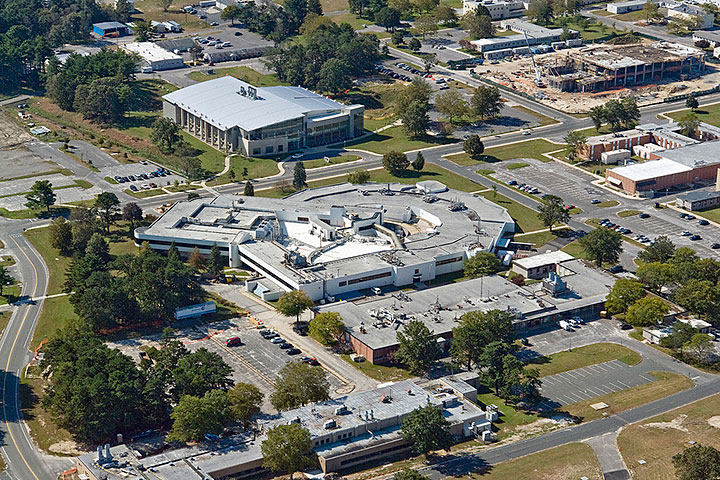 An aerial view of NSLS when the facility was still running. Today, the building is the home of Brookhaven Lab's Computational Science Initiative.

Building on the legacy of NSLS, NSLS-II was designed to deliver x-rays 10,000 times brighter than its predecessor. The key to the upgraded design is NSLS-II’s half-mile-long accelerator ring that enables the facility to produce extremely narrow x-ray beams. At its largest point, the beam at NSLS-II is only a few dozen microns wide—the width of a human hair. NSLS-II’s advanced accelerator design also provides unprecedented beam stability, giving the facility a world record for beam spot size and opening doors to many new types of scientific experiments.

Five years of growth and success at NSLS-II

How the National Synchrotron Light Source II works. In a synchrotron light source, a "beamline" is a long pipe in which light travels outwards from the facility's storage ring, where electrons circulate at nearly the speed of light. At NSLS-II, each beamline connects to two hutches: the optical hutch, where scientists can adjust the light to their experiment's specifications, and the experimental hutch, where scientists set up their samples to be illuminated by the light.

NSLS-II’s large capacity for beamlines not only enables more scientists to access the facility’s ultrabright light at once, but it also provides the space and flexibility needed to develop highly specialized scientific instruments that accommodate unique and difficult-to-run experiments.

One of the most notable of these highly specialized beamlines at NSLS-II is the Hard X-ray Nanoprobe (HXN). Housed in its own satellite building that was specially constructed to provide extraordinary stability, HXN gave NSLS-II a world record for beam spot size and offers world-leading spatial resolution to users. The beamline enables scientists to investigate everything from microelectronics to cell membranes. 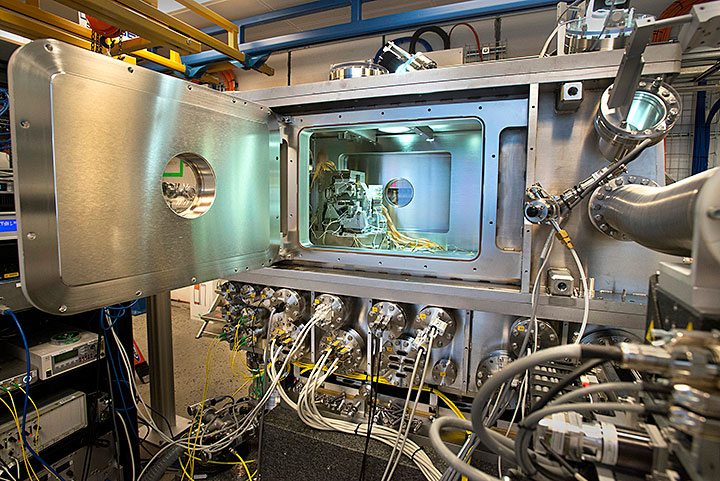 Another remarkable beamline that is unique to NSLS-II is the Soft Inelastic X-ray Scattering (SIX) beamline. Like HXN, SIX is also enclosed in its own satellite building, but for a different reason. This beamline is built with a 50-foot-long spectrometer arm that moves from one end of the building to the other, providing world-leading energy resolution. The beamline’s design enables scientists to probe the electronic structure of materials to advance research on quantum materials and superconductors. 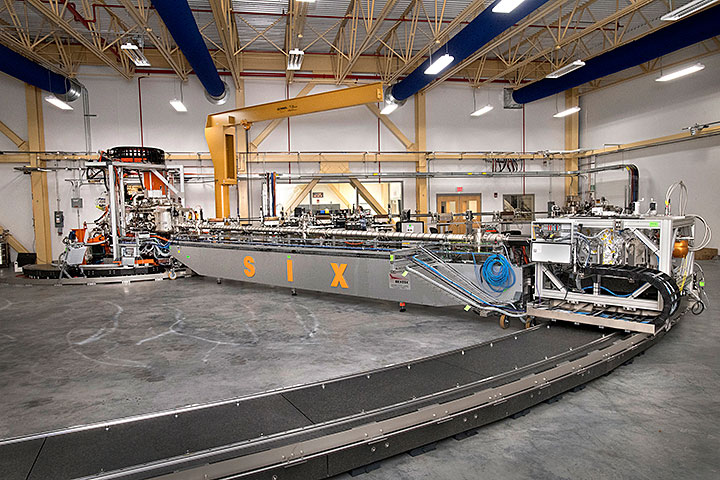 With so many specialized and world-class tools available at NSLS-II, visiting researchers can benefit by taking their experiments to multiple beamlines to compare and combine datasets and achieve a more holistic view of their samples.

“NSLS-II recognizes the need for comprehensive studies on materials, which means researchers need to use more than one technique to uncover the properties and behaviors of materials,” Hill said. “I am very pleased that our users can now request multiple beamlines on a single proposal, what we call a ‘multimodal’ proposal.”

From biology to materials science, researchers from all areas of science have come to NSLS-II to take advantage of these capabilities. In the facility’s first five years, staff scientists and visiting researchers have unlocked new protein structures, studied nanoscale phenomena in electronic and information technologies, studied energy materials across multiple length and time scales at once, and watched chemical catalysts work in real-time.

Sometimes, the images produced at NSLS-II are as beautiful as they are informative. Earlier this year, scientists at Carnegie Mellon University collaborated with NSLS-II to determine how nanomaterials could be used to tackle global food security challenges. Using the Submicron Resolution X-ray Spectroscopy (SRX) beamline and the X-ray Fluorescence Microprobe (XFM) beamline, the team produced images in which key elements in crop samples fluoresced. By studying these images, the scientists were able to determine how nanoparticles influenced the movement of metals throughout the crops, suggesting ways to target the delivery of nutrients to specific plant organs.

Data images produced by XFM. (Left) Data from the Carnegie Mellon research described above. (Right) Scans of a leaflet of P. vittata (an arsenic hyperaccumulator) from an additional study, showing the concentrations of potassium (green), arsenic (red), and calcium (blue).

In March, scientists at NSLS-II identified the cause of battery cathode degradation in nickel-rich materials. The team used the Inner-Shell Spectroscopy (ISS) and X-ray Powder Diffraction (XPD) beamlines at NSLS-II to “see” the chemical environment around nickel atoms in a cathode material, and determined inhomogeneities in nickel’s oxidation states led to the degradation. Their work could help improve lithium-ion batteries, which are used to power everything from consumer electronics to electric vehicles. 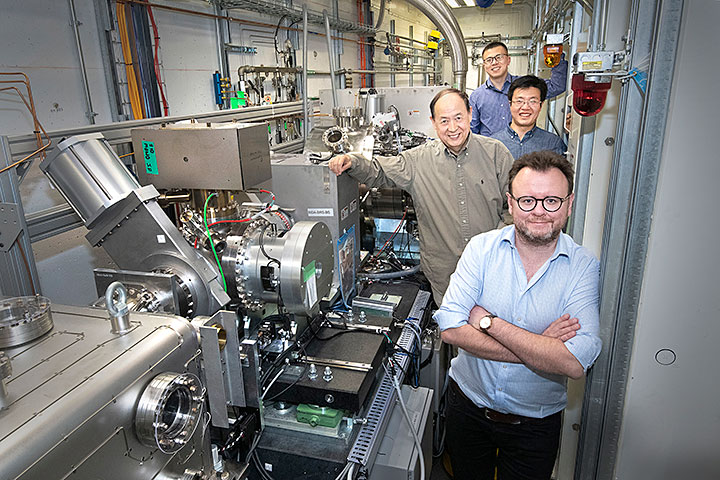 Brookhaven chemists and NSLS-II scientists are shown at the ISS beamline, where the battery research was conducted. Pictured from front to back are Eli Stavitski, Xiao-Qing Yang, Xuelong Wang, and Enyuan Hu.

In addition to collaborating with universities and other national laboratories on individual studies, NSLS-II has established strong working relationships with outside institutions to fund and operate new beamlines at the facility. For example, the National Institute of Standards and Technology owns and operates three beamlines at NSLS-II that enable scientists to “see” detailed views of chemical reactions. Case Western Reserve University operates one beamline and collaborates with NSLS-II on two additional beamlines to provide scientists with a suite of biological imaging endstations. One of NSLS-II’s most notable partnerships, however, is with Brookhaven’s own Center for Functional Nanomaterials (CFN), another DOE Office of Science User Facility. CFN currently operates three beamlines in partnership with NSLS-II that are specialized for characterizing nanomaterials.

New science on the horizon

In the years to come, scientific collaborations will continue to be key for NSLS-II. For example, a new cryo-electron microscope (cryo-EM) center funded by New York State, called the Laboratory of Biomolecular Structure (LBMS), is currently under construction at Brookhaven Lab, adjacent to NSLS-II. Combining the suite of biological beamlines at NSLS-II with the cryo-EMs at LBMS will offer researchers complementary techniques to study biological systems. The goal is to reveal unprecedented information on the structure and dynamics of the engines of life.

Also under construction at NSLS-II is a new beamline funded by the New York State Energy Research and Development Authority, called the High Energy Engineering X-Ray Scattering (HEX) beamline. HEX will be a powerful and versatile tool to advance energy storage and conversion research, such as battery development and materials engineering. The beamline will provide extremely energetic x-rays that can penetrate steel casings of full-size batteries so scientists can image atomic structures under working conditions and in real time.

“Looking to the future, I see NSLS-II becoming an even larger hub for materials characterization of all kinds,” Hill said. “Our high-end beamlines and expert staff offer many opportunities for partnerships and collaborations. At the end of the day, this is what makes our science strong: the brightest minds, together, focusing on the biggest challenges in science.” 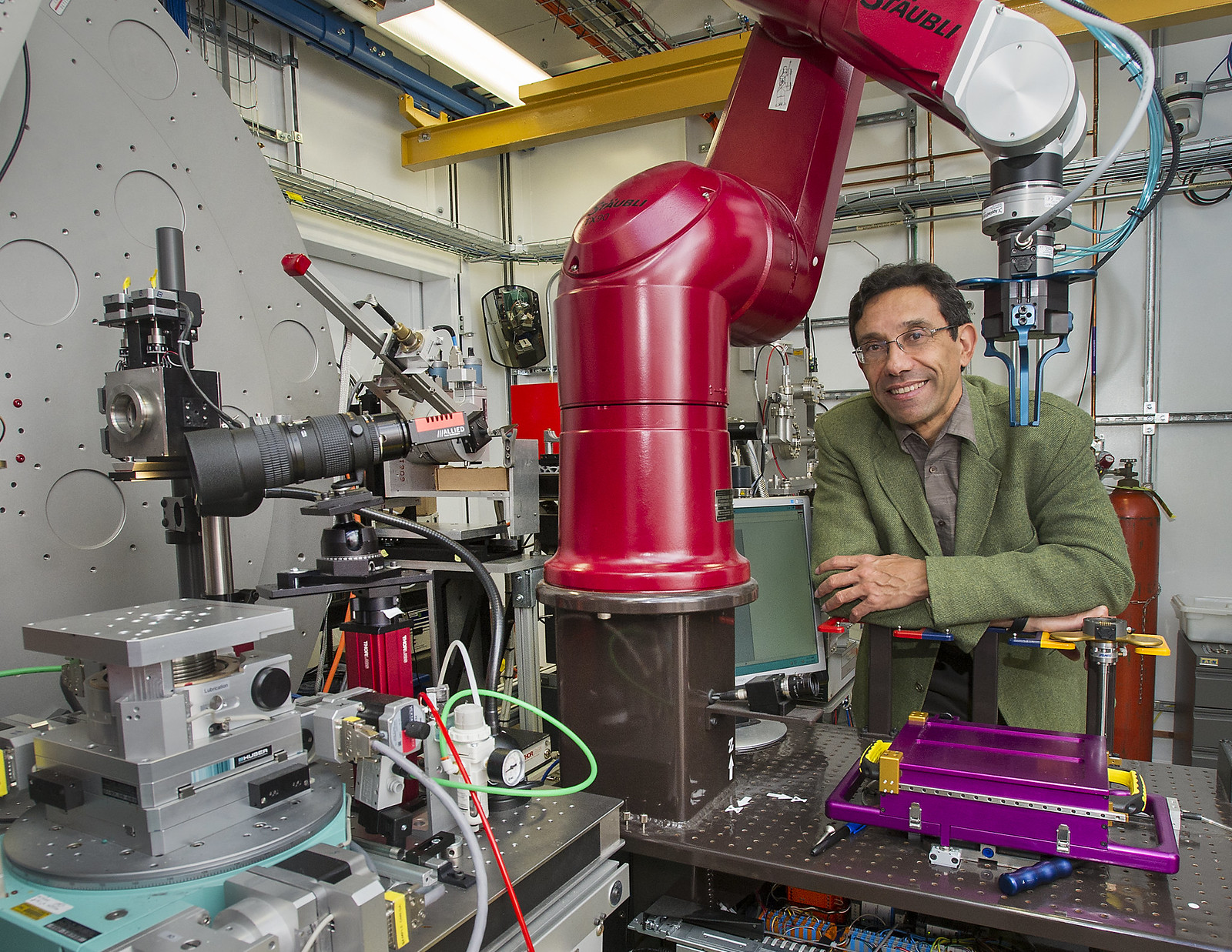