The following story was originally published by Argonne National Laboratory. In this study, a team of scientists investigated a new class of ion conducting quantum materials in the perovskite family that uses lithium ions to enhance its conductivity. To fully understand the specific behavior of the electrons in the nickel and oxygen atoms inside the material, the researchers used a technique called x-ray absorption spectroscopy at the In situ and Operando Soft X-ray Spectroscopy (IOS) beamline at the National Synchrotron Light Source II (NSLS-II), a U.S. Department of Energy Office of Science User Facility at Brookhaven National Laboratory. For more information on Brookhaven’s role, contact Cara Laasch (laasch@bnl.gov). 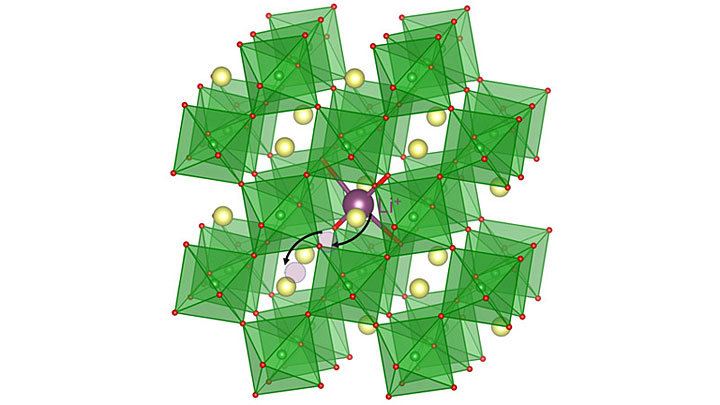 Lithium ions diffuse rapidly within the lattice of a strongly correlated perovskite called samarium nickelate. Quantum calculations show that this fast shuttle occurs due to the low thermodynamic barrier associated with hopping of Li ions (shown as purple sphere) between adjacent tetrahedral sites (purple dotted circles). The samarium, nickel, and oxygen are shown as yellow, green, and red spheres respectively, while the NiO6 octahedra are highlighted in green. (Image by Argonne National Laboratory.)

Scientists at the U.S. Department of Energy’s (DOE) Argonne National Laboratory, in collaboration with researchers from Purdue University and Rutgers University, have merged materials science and condensed matter physics in a study of a promising solid material that conducts lithium ions.

The transport of ions, or charged atoms, through materials plays a crucial role in many electrical systems — from batteries to brains. Currently, the leading ion-conducting materials are liquid and organic, but the development of solid and inorganic ion conductors could have broad applications in energy conversion, bio-engineering and information processing.

In this study, samarium nickelate, a material that is also a solid, was shown to quickly transport lithium ions under certain conditions. The study was published in Proceedings of the National Academy of Sciences USA.

“We have identified a material that has insulating properties better than a liquid and ion conductivity rare for a solid.”

The study reported that for samarium nickelate, the quantum phenomena at play within its molecular structure affect the material’s properties on a larger scale, and its unusual structural features can yield favorable electronic properties.

In an earlier study, the scientists discovered that small ions, like protons, could move through the samarium nickelate material very quickly. ?“Then we asked what would happen if we inserted slightly larger ions, like lithium, into the material,” said Shriram Ramanathan, a co-author of the study and Professor of Materials Engineering at Purdue University.

Lithium ions play an important role in the battery world: many batteries in use today rely on the transport of lithium ions through an electrolyte material to facilitate the flow of electrical current.

“Because the samarium nickelate can easily shuttle lithium ions through its lattice at room temperature, it has the potential to be used as a solid-state electrolyte in a battery,” said Hua Zhou, an Argonne physicist. ?“This falls in the same category as the best solid lithium-ion conductors that we have seen.”

Not only does the samarium nickelate quickly transport lithium, it also displays a level of electrical resistance that is desirable in electrolyte materials. On its own, samarium nickelate behaves like a metal, allowing electrons to freely pass through its crystal lattice. However, when scientists insert lithium ions into the material, the ability of free electrons to pass through is reduced by eight orders of magnitude. This resistance allows the material to avoid problems that often plague other liquid electrolytes that are commonly employed, such as unnecessary energy loss and short-circuiting.

“We have identified a material that has insulating properties better than liquid electrolytes such as alkyl carbonates, which are commonly used in current batteries, and ion conductivity rare for a solid,” said Subramanian Sankaranarayanan, scientist at Argonne’s Center for Nanoscale Materials.

Kotiuga performed the first calculations to determine how the material’s electronic structure changes when introduced to lithium.

With these calculations in hand, the team then used capabilities offered through Argonne’s unique suite of DOE Office of Science User Facilities — the Advanced Photon Source (APS), the Argonne Leadership Computing Facility (ALCF) and the Center for Nanoscale Materials (CNM) — to obtain a more detailed description of the mechanisms causing the behavior. The team also made use of the National Synchrotron Light Source-II, a DOE Office of Science User Facility at Brookhaven National Laboratory.

The APS probed the samarium nickelate using high-intensity X-rays as scientists gradually added the lithium. In real time, the scientists viewed how the electronic structure and chemical bonding evolved down to the atomic length scale.

The scientists also used the ALCF and Carbon, a high-performance computing cluster at CNM, to simulate ionic motion in the lattice.

“Supercomputers are becoming an increasingly integral part of materials design and discovery,” said ALCF Director of Science Katherine Riley. ?“With our leadership-class systems, researchers can explore materials at an unprecedented level of detail, providing insights that can ultimately be used to tailor novel materials for targeted applications.”

Using the ALCF’s Mira supercomputer, the team modeled the dynamics of the system to predict what pathways the lithium ions could take through the nickelate.

“Computing the pathways was an important complement to the rest of the research because it helps to explain the behavior we observed,” said Sankaranarayanan. ?“We can use this knowledge to recreate and control these effects in other materials.”

The scientists plan to study other materials that may display similar properties to identify other ions that samarium nickelate can conduct.

Other Argonne authors include Badri Narayanan, Mathew Cherukara, Yongqi Dong, Ronghui Kou and Cheng-Jun Sun. Argonne’s portion of the research was funded by the Office of Science, National Science Foundation and the Air Force Office of Scientific Research.

About Argonne’s Center for Nanoscale Materials
The Center for Nanoscale Materials is one of the five DOE Nanoscale Science Research Centers, premier national user facilities for interdisciplinary research at the nanoscale supported by the DOEOffice of Science. Together the NSRCs comprise a suite of complementary facilities that provide researchers with state-of-the-art capabilities to fabricate, process, characterize and model nanoscale materials, and constitute the largest infrastructure investment of the National Nanotechnology Initiative. The NSRCs are located at DOE’s Argonne, Brookhaven, Lawrence Berkeley, Oak Ridge, Sandia and Los Alamos National Laboratories. For more information about the DOE NSRCs, please visit https://science.energy.gov/bes/suf/user-facilities/nanoscale-science-research-centers/

Argonne National Laboratory seeks solutions to pressing national problems in science and technology. The nation’s first national laboratory, Argonne conducts leading-edge basic and applied scientific research in virtually every scientific discipline. Argonne researchers work closely with researchers from hundreds of companies, universities, and federal, state and municipal agencies to help them solve their specific problems, advance America’s scientific leadership and prepare the nation for a better future. With employees from more than 60 nations, Argonne is managed by UChicago Argonne, LLC for the U.S. Department of Energy’s Office of Science.

The U.S. Department of Energy’s Office of Science is the single largest supporter of basic research in the physical sciences in the United States and is working to address some of the most pressing challenges of our time. For more information, visit the Office of Science website.